A Swamp Grows in Scottville

A couple years ago, I was indulging myself on a Friday fish fry at Beamer's Restaurant in the Spartan West Bowling Alley complex, when I notice Scottville's outgoing city manager, Amy Williams, beside me at the salad bar.  Along with the usual small talk, I thanked her for being very cooperative and efficient in regard to the half dozen or so FOIA requests I sent to the City of Scottville (COS) for public records over the years.

She confided that she and City Attorney Tracy Thompson agreed that the best policy for the COS was to comply and quickly compile records requested when the public asked for them.  The costs involved with trying to block records from being produced was a lot higher than if they just properly gave them out in the first place, even if those records might be potentially embarrassing for the COS as it was in the time that their drunk mayor drove into a gully. 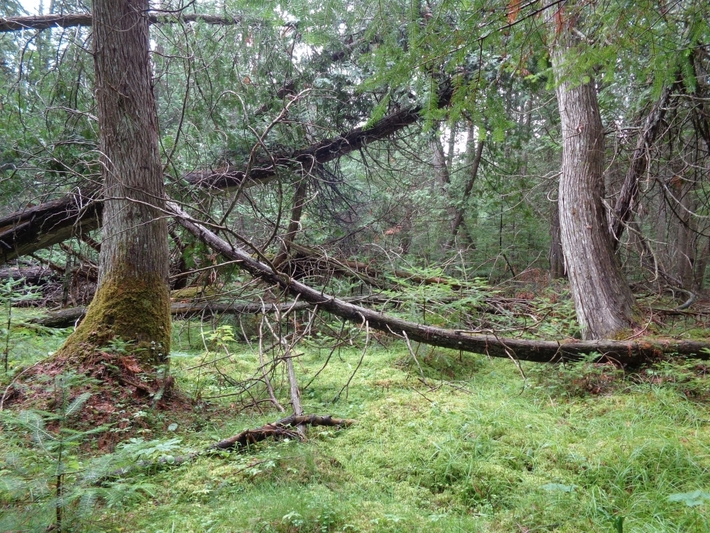 In the less than two years since that encounter, Scottville's power structure has changed.  They have a new city manager, city manager, and mayor, not to mention a plurality of four new commissioners.  Their FOIA policy has appeared to have changed too, submerged in the swampland one would find at the east end of Second Street.

The city manager hired to replace Ms. Williams, Courtney Magaluk, is currently on an extended maternity leave.  The extension of that leave appears to be that she is under suspicion following a December 2020 investigation into reasons why the COS nearly missed a deadline for submitting revenue-sharing paperwork to the State.  An ad hoc committee consisting of Mayor Marcy Spencer, Interim City Manager (police chief) Matt Murphy, and City Attorney Carlos Alvarado was formed to look at why that happened and if there were any other mistakes made.

At the January 4th meeting, Alvarado noted that the investigation had been completed and that they would be holding a closed session hearing today (1-18-2021) to allow Ms. Magaluk a chance for rebuttal in front of the commission and city officers.  An amazing amount of non-transparency has clouded this investigation and upcoming meeting, some of it being unlawful.

First, Magaluk's name was initially provided by several local news sources as the focus of this investigation.  Inexplicably, these sources would change their story and refer to her as an unnamed 'city employee'.  This change may have been encouraged by the COS or Ms. Magaluk because such an investigation, even if it turns out to be inconclusive, can irreparably damage her character and/or career.  The change, however, looks suspicious to a casual observer that believes government business decisions should be transparent as much as possible.

Second, I sent a FOIA request to the COS on January 5th asking for the completed investigation given to CM Magaluk and her response, both mentioned at the January 4th meeting.  The next day, the Ludington Daily News (COLDNews) filed two FOIA requests, one for the report and the other for any meeting minutes of the investigative ad hoc committee.  The latter was refused, saying that no minutes existed.

City Attorney Alvarado refused release of the investigation and Magaluk's response to the report to both the Ludington Torch and the COLDNews by claiming two exemptions existed that prohibited any part of the record from being publicly disclosed. The exemptions cited were not explained in any detail other than Alvarado's use of the statute.

One exemption infers that the record is exempt because of its investigative nature, and yet completed administrative investigations are fair game except for parts which may be invasive of personal privacy (see 1(b)).  The other suggests that the investigation and her response is of an advisory nature and they cover things other than factual materials.  So if one actually believes this nonsense, one would believe that the investigation report completely consists of material that is either invasive of Magaluk's privacy or advisory communications devoid of facts.

Had Mr. Alvarado actually read the exemptions he used, he would notice that both are conditional on him explaining why the exemption applies.  He didn't.  That's why both the COLDNews and the Ludington Torch have submitted appeals to the COS commission.  The COLDNews also appealed their second denial by reminding the COS that any committee vested with power and able to investigate and make recommendations to the commission would have to hold public meetings and keep meeting minutes to be in compliance with the Open Meetings Act (OMA).  This is the same argument I and another plaintiff used in our local court to get Ludington's standing committees to better comply with the OMA.

Lastly, in addition to their regular meeting at 6:30 PM on Zoom tonight, the triumvirate of Chief Murphy, Mayor Spencer and Barrister Alvarado scheduled a special meeting at 5:30 PM on Zoom to discuss the issue with CM Magaluk in closed session.  The problem with this meeting is that it is held in violation of the OMA.  Public notice electronically for special meetings are fairly explicit in the OMA section 5(4) which especially applies during the Covid-19 crisis.

The notice for this meeting is not on the COS' homepage even under their "Announcements and Public Notice" banner, nor is there any separate page reachable from the homepage that has notifications for special meetings. 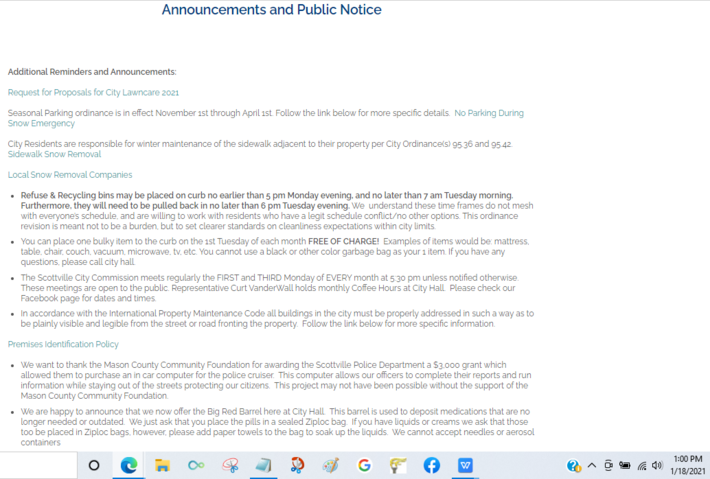 This omission is especially egregious when one considers that this is a Zoom meeting which requires those who plan to attend to supply a meeting ID number and passcode.  When the COLDNews ran a weekend story about the meeting and their FOIA appeal, they supplied only the meeting ID for the regular meeting.  The only place you can find this number is on their Facebook website and in an updated electronic COLDNews article that was changed recently to add this information.

This is not sufficient for giving the public proper notification under the OMA, even with Covid-19 changes in the law.  When one adds all of this up: the lack of minutes from the investigative committee's meetings, the failure to disclose public records in accordance with FOIA and the lack of giving proper public notice for this afternoon's meeting, one has to wonder whether this investigation will be equally improper and in violation of other laws.

Courtney Magaluk followed in the footsteps of Amy Williams by conducting her business in accordance with the FOIA and the OMA.  Without her leadership over the last couple months, Scottville is ruining any kind of reputation it had for transparent and accountable behavior.

Post-meeting update:  the City of Scottville held their unlawfully noticed special meeting at 5:30 and went into closed session under section 8h to consider a memo drafted by the city attorney.  It was explained that CM Magaluk had offered her resignation.  They were not very clear on the terms of her resignation or the underlying issue that led to it. They did not even let the public know who all was invited into the closed session.  I asked them point blank in public comment and was ignored.  They won't disclose the investigation report or the response to that report claiming bogus exemptions, they won't tell you who played a part in the secret session made illegal due to the fact it was done at an improperly noticed meeting.  This isn't how a small town government is supposed to work.

Permalink Reply by Freedom Seeker on January 18, 2021 at 8:27pm
Unbelievable!

It appears that the non transparency virus that has plagued Ludington for years has now infected Scottville.What amazes me is that suddenly the LDN is concerned with bad actors in Government. They couldn't care less about Ludington but they will do their best to squirrel around Scottvilles dirty laundry. I still wouldn't believe a word the LDN may print about the Scottville situation because they have mislead about, lied about and withheld information from the public for years. As far as I am concerned all of the integrity in local news can be found on the Ludington Torch which has been investigated and truthfully revealed by XLFD.

In the middle of all this is, of course, Mr. Alway, the local journalist/politician who used his news agency to smear Scottville's City Manager before any real facts were revealed. I repeat myself, Mr. Alway, your either a journalist or a Government official. You can't be both and be relied upon to be unbiased and impartial. Anything you print is suspect and should be regarded with suspicion.

Willy, you may have unknowingly tapped into the reason why the COLDnews has taken a significant interest in this 'Big Noise out of Scottville"-- the one that isn't originating from its clown band.  Not only is there the normal conflict arising between two competitive media operating in the same market (even when the majority of both of their output is propaganda), but also there is the friction remaining from the COLDNews firing of Alway to bring in the New Year in 2011.   The COLDNews even surprised me with their brilliant second FOIA request (more on this later).

Thanks heartily for the endorsement of this venue as your source for the local truth, that's our goal. 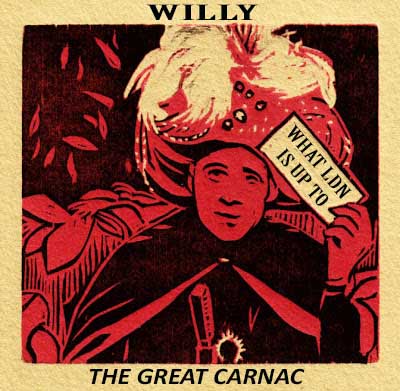