I have to admit, this story got by me. I had no idea this was happening even though Tucker Carlson interviewed a Canadian journalist, Ezra Levant, last month, who reported on it after receiving documents thru a FOIA request.

In an article from the Rebel news it was stated that "Justin Trudeau invited China’s People’s Liberation Army (PLA) to send its troops for cold weather training at CFB Petawawa in Ontario — and Trudeau raged at the Canadian Armed Forces (CAF) for cancelling the training after China kidnapped Canadian citizens Michael Spavor and Michael Kovrig.

This is only one of many bombshell revelations in China Files, a 34-page access to information document released by the Trudeau government to Rebel News, seen below.

Documents that normally would have been completely blacked out by government censors were instead greyed out — the documents remain completely readable. Rebel News has chosen to black out a very small portion that would otherwise compromise the safety of an individual.

The bombshell revelations in the China file can be accessed here.

Samantha Chang of the Western Journal commented that " Canada is not a military superpower, and now we know why: The country’s gullible leaders apparently don’t understand that its military operations are supposed to be kept secret from potential enemies of the state.

In a shocking revelation, Canada’s Department of National Defence has confirmed that it allowed communist China’s army onto Canadian soil to observe its winter training exercises in February 2018, the Toronto Sun reported.

The DND claimed that members of the People’s Liberation Army only observed and did not participate in any training — as if that minimizes the potential threat to national security. 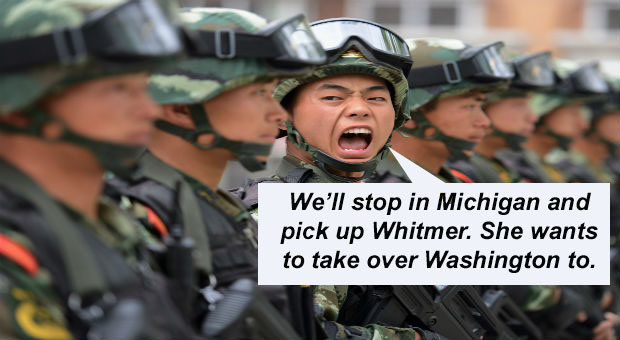 I Wonder which Country is going down the toilet first? The US under Biden or Canada under Trudeau. When that happens, Mexico will move in and take over.

Permalink Reply by Freedom Seeker on January 27, 2021 at 8:21pm
Thanks Willy for the article. Maybe the Chinese are figuring how to control the Keystone Pipeline. Like they need to go to Canada for cold weather training? Don't they have enough cold in their own mountains?


“On the military front, they've already achieved having the largest navy of any country in the world. From a military force standpoint, the People's Republic of China has a military of 2 million,” Ratcliffe said during an appearance on Tucker Carlson Tonight Monday. “They want them to be the largest, and they also want them to be the strongest, which is why they are engaged in what you referenced, which is called gene editing, literally trying to alter the DNA, experimenting on DNA to make soldiers, sailors, and airmen stronger and more powerful.”

China is a longtime nation with great patience just laughing at our shortlived arrogance, imo, sitting in wait to take us down and these current political divisions are just one more aspect to give them another door. They are moving in all over the world, at strategic seaport gates, providing infrastructure to poor nations and then when they are weakened, take over the infrastructure patiently sitting up their bases though we saved their asses and built their strength during WWII.

Trump, imo, was so right on so many aspects of MAGA but now looking at all the liberals reemerge from Obama's cabinet, you can see who was seething for the last four years to overturn Trump on every liberal newscast, every night now. Obama's agenda is the mastermind still, imo. I feel it is an unseen spiritual warfare starting to really heat up and for the wise, time to find refuge in the mountains or wherever there is safety because Harris is just another puppet on the Obama plan to hate the basis of the foundation of the USA.

Waiting for the news to come in that Governor Whitmer invited the CCP army over for maneuvers in the UP for cold weather training.

Dat's probably right, Eh?  Sizing up the Soo Locks and Mackinac Bridge and Enbridge Lines.  "Come on down to Looper Land Chicoms.  Got any newer strains of a good virus handy?"  Sincerely, G. Whitmer

If the Chinese did cross the bridge at the Sault I bet they would not need passports like Americans need to cross over and back to Canada. Love those pastys