We try to generally keep the Ludington Torch's content as local, so if this editor does dip into state or federal politics and policies, it has some relevance to this area of Western Michigan or Ludington itself.  The recent second impeachment of Donald Trump, followed inevitably by the second acquittal of Donald Trump, can be tied into Ludington politics almost directly. 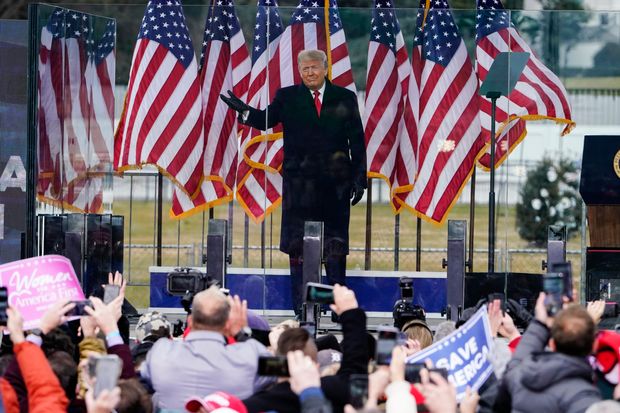 A local populist from the city council was 'impeached' months before former President Trump's first impeachment; she was also censured with a commensurate loss of power after she lost her bid for reelection in 2020, months before Trump suffered the just-concluded impeachment trial for the same reason: using words some objected to.  Councilor Angela Serna, like Trump, inspired followers and detractors, allowing us to learn that the detractors had the power in the halls of Ludington and Washington DC to bash back using their government powers.

Yet, Serna was never accused of incitement, which was Trump's sole article of impeachment in the second Senate trial.  I was.  Back in 2011, the city council passed a policy that allowed city officials and employees to banish people from public facilities.  Records show that the policy was created by the police chief and city attorney to appease the community development director whose actions and expenditures were being exposed (on this website) as being financially favorable to her and her associates.

Instead of addressing the obvious corruption, she accused me of "insighting mob mentality".  After failing to meet any standards for a PPO against me, she had her powerful peers, who were mostly complicit in the corruption and fraud, write up a policy to neutralize my investigations at city hall.  They did this by writing up their own rules without very much consideration of existing laws or for basic civil rights.  Without any due process and solely for the reason of providing city hall 'bad press', I received a 'letter of trespass' that prohibited me from stepping foot on city hall or police department grounds under threat of a misdemeanor.

From my experiences ten years ago I can wholly commiserate with Donald Trump for being falsely charged with inciting an insurrection.  For he was no more responsible for what happened at the Capitol than I was for creating a 'mob mentality' that made people distrust city hall in 2011 by showing the public records, connecting the dots, and exposing the corruption.

Even if I wasn't sympathetic towards Trump because of our shared experience, one cannot deny the timeline of what happened on January 6th.  The Capitol Building was breached at 12:52 PM, Trump's speech at the Ellipse did not end until 1:10 PM and it's about a 15 to 20 minute walk between the two.  If anybody was whipped to a frenzy by that speech to go down to sack the Capitol, they would have been 40 minutes late.

Does anybody honestly think that someone thoroughly devoted to Trump would leave his speech early?  I seen plenty of larger rallies during the summer and fall where he would be in front of even-larger crowds and ask them the question:  "Is there any other place you'd rather be than a Trump rally?"  Did you ever hear or see anybody say 'yes'?

Legally, incitement is one of those concepts that should never have applied in this instance, just like it was misapplied back in 2011 in Ludington.  When a law is intentionally misapplied to find somebody responsibly exercising their rights to free speech or of holding their local government accountable, society and its authorities should become alerted and annoyed about those doing the misapplication.  In a system where media and government have both been corrupted, it becomes harder for the community to recognize what's wrong.

In 2011, I was banned from city hall and the police station without any sort of hearing.  The Democratic Party did Trump a favor by allowing him to go through a process.  That process turned out to be illustrative of how corrupt the legislature has become when the majority's contempt of one man has blinded them to allotting real due process and other Constitutional rights many still hold dear.

Consider, the House had an impeachment lasting one day (January 13th) without much in line with fact-finding but plenty of emotion.  Representatives from both sides argued their cases without outside attorneys, leading the votes to go along mainly party lines with ten defectors from the Republicans.  The appeal to emotion rather to law continued at the Senate, where the impeachment managers led off with videos that interspersed scenes of violence between snippets of Trump's speeches that day and before, leading the unwary to presume the speeches were inflaming the violence when it hadn't.

The prosecutors and presiding Senator Leahy knew this and should be ashamed of themselves for allowing it in a supposed court setting.  When legislators show such little regard for judicial conduct, how can the public trust them to make responsible laws at their day jobs.  It was a kangaroo court and the 57 'judges' who decided to pick the low-hanging fruit should be utterly ashamed of themselves for creating a new precedent for picking away even more rights from us all.

Ten years ago, I struck back at my unfair treatment and became stronger as a journalist and a person for it.  Chances are, the same will happen with Trump and those who actually believe in draining the political swamp if they persist and 'fight' back.

If, ten years ago, XLFD had not exposed the corruption of no-contact bids which provided personal gain to city agents, along with other unethical advantages, think where the City of Ludington would be today? Although it seems like a constant task, it has to be making positive changes.  Thanks X for years of "insightment."

Well said X. You've done a great job helping the citizens become aware of the corruption that exists at Ludington's City Hall. If Washington is a swamp of corruption then Ludiington is a scum pond of corruption. We all know who is still in charge and who is causing the scum to continue to form over the little pond of Ludington. You my friend are the skimmer, unfortunately the scum keeps surviving but now we are all very aware of who creates and perpetuates that slimy  substance, thanks to you.

Speaking of slime. The Miejer family has a bit of a slime problem itself. Republican, Representative Peter Miejer voted to impeach the leader of his own party. Shame on the Miejers for raising such a stupid child. This is who Conservative Michiganders send to Washington? Shame on them, He represents the worst of the RINO generation. I am boycotting Meijer. I do not want any of my money going  into this fools pockets. This fool is making the rounds on MSNBC, CNN, and all of the other lying worthless fake news creators.

At one point in the interview he was asked if he received death threats. Listen to how he sidesteps the question and never answers it. This guy is a moron.

Then there is Rep. Upton. Where was Upton when the Democrat terrorists were sacking and destroying cities across

the US for the last year. Not a peep out of him. Is this the best Michigan can do to have these kinds of Representatives in Washington.

In a Tuesday press release, he explained his reasoning.

“Today the President characterized his inflammatory rhetoric at last Wednesday’s rally as “totally appropriate,” and he expressed no regrets for last week’s violent insurrection at the U.S. Capitol. This sends exactly the wrong signal to those of us who support the very core of our democratic principles and took a solemn oath to the Constitution.  I would have preferred a bipartisan, formal censure rather than a drawn-out impeachment process. I fear this will now interfere with important legislative business and a new Biden Administration. But it is time to say: Enough is enough.

The Congress must hold President Trump to account and send a clear message that our country cannot and will not tolerate any effort by any President to impede the peaceful transfer of power from one President to the next. Thus, I will vote to impeach.”

Our energy needs to be directed toward the head of the GOP in Michigan . We need to DEMAND that investigations into election fraud continue to their obvious end , purge the voter rolls, bring up and finance WINNING candidates ( John James should run again for governor) get any voting machines out of Michigan as well.The GOP needs to vet ALL clerks in EVERY COUNTY. We need some real heat, I too will be boycotting all leftists institutions and RINOs that do not support "WE THE PEOPLE" or our true President... TRUMP.

As the Democrats try to cancel the history of Trump , they seem to have made him more popular. He will go down in History as  at the present time, the only President to be impeached and acquitted twice .

Did you all see the funny knock knock joke between Pelosi and Trump?

What I don't understand is why Pelosi would want a investigation on what and why the attack on the capital happened. It was known for days ahead of time that the FBI knew about a possible problem. The Capital police were notified and request for extra police presents were denied 6 times. BY WHO?   Who is in charge of the of the security of the capital?    Of coarse the capital police and they report to Pelosi, so she must have been the one to turn down extra security.    Why? maybe that she knew that she could pin any problem on Trump which she did.   She just doesn't know when to give up.

There is a very clear explanation.

She wanted the Senate hearing and vote on election fraud interupted and also a reason to impeach Trump again. Additionally , she wanted a reason to go after our second amendment rights. The pearl clutching leftists could not be happier about the outcome of January 6th. Pelosi essentially created a stand down order of the capital police. Refused to bring in national guard because the Antifa people led the crowd into the Capital. Unfortunately , some yahoos and overzealous MAGA people followed them in. It went exactly as she and her minions planned. Almost... look into what the leadership did in Charlottesville, I mean really really read the details if you can find them. The exact playbook. Tricky Terry McAullife was behind that one...

I agree LL. She is a wily politician and in the coming years, we are gong to see just how bad she can be.