At the April 11, 2022 Ludington City Council meeting, an elaborate ceremony giving LPD Officer Mike Fort (pictured below) a promotion to sergeant was held at the beginning.  When I wrote the recap of that meeting, I was very tempted to muse about whether he was being sued; in the past, I've noticed that there has been an unnatural coincidence in local police receiving awards for service or promotions after they have grievously violated someone's civil rights (such as LPD's Aaron Sailor and MPD's Dougie Vansickle).  In order to give the officer and their department a good PR message, they overlook the dedicated officers and give awards/promotions to those who were bad; it just doesn't promote responsible policing. 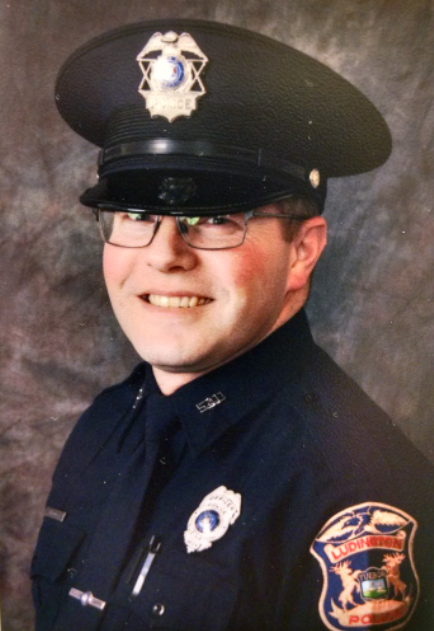 The agenda packet for the May 9, 2022 meeting of the Ludington City Council showed they once again had a closed session in order to have an update on a lawsuit settlement.  One expected that something may have fell through on the siren federal lawsuit, but it was noted by the mayor that they would be addressing settlement issues for Niesen v. Fort, another federal lawsuit claiming a civil rights violation by Sergeant Mike Fort (back before his promotion) on Jessica Niesen.

I hope to be receiving more information about this lawsuit and the settlement through the FOIA process, but for now, the council took fairly little time to discuss the issue, and unanimously settled the lawsuit after the session.  This is a good indication that the plaintiff had a very strong case, as this has only been in that district court for a year with few motions and hearings held.

The session came after the first public comment, where Annette Quillan emphasized that the downtown businesses should be keeping sidewalk space open of at least four or five feet, without naming names of those businesses who may be cheating pedestrians out of that space.  Three women then spoke in opposition to creating a committee to regulate marijuana business in town (on the agenda to adopt), citing their own experiences, studies, and what happened with Pentwater.

Later in the meeting, the ordinance was actively debated among councilors, with Ted May and Kathy Winczewski musing that it might be best for the people to decide, as both sides have threatened at prior meetings to put the issue as a referendum.  John Terzano would argue that the council was given that duty and they should do that, the other four in the council agreed with him and the ordinance to form an ad hoc MJ regulation committee was adopted on a 5-2 vote.

I could only chuckle at this discussion with Terzano, Jack Bulger, Wally Cain, and Les Johnson stressing their duty to the people of the city to pass the ordinance, and not worry about whether either referendum is initiated.  It was humorous to me, because I finished up the comment period earlier in the meeting telling the city council that they had indeed neglected their duties and made the May election results on the charter revision process illegitimate because of the negligence of their statutory responsibilities.  The only 'cure' was to put it back on the November ballot:

XLFD:  "I have given each councilor a copy of section 19 of the Home Rule City's Act which states "The legislative body of the municipality unless it is otherwise provided, shall fix in advance of the
election of a charter commission the place of its meeting, the compensation of its members, the money for the expense thereof, and if need be, provide the ballots for election."

I have been at every city council meeting since the council passed a resolution to put the charter revision question on the May ballot, I have read extensively through the minutes and the packets of those meetings and never has this city council fixed the compensation of prospective commissioners or fixed the money for the revision process.  You failed to do your duties before the election that was held 6 days ago and the vote should be deemed illegitimate.

One can infer that the legislative intent of section 19 is for the electorate to understand what the fiscal ramifications of voting yes on a revision will be.  Many voters would have been under the mistaken impression that there would be little or no cost since those particulars were not on the ballot, but the revision committee has effectively been given a blank check by this council's failure to perform their duties.  The last charter revision by Detroit cost $1.5 million to craft and was soundly voted down last year.

Even the city hall reporter for the LDN, Justin Cooper, who has also attended each meeting since the revision resolution, in the same paragraph which he granted me a seat on the commission in last Wednesday's paper, confessed in his article that members would be paid a still undetermined stipend.  You councilors failed to fix compensation of commissioners, failed to fix the expenses of the commission, the vote should be nullified.  If you want to have a charter revision have a new vote in November where you fix those numbers beforehand, and better yet, put them on the ballot so voters can be informed when they vote.  Make the process legitimate, or abandon the notion."

The city attorney would later try to explain at the city manager's urging that the city council effectively set those rates when they passed the 2022 budget, which had the expenses of the committee therein.  After the meeting, I asked for the relevant records he based his claim on and will show why his defense is lacking in a later article.

Two public hearing were held after the closed session, one was to vacate the city's right to the alley behind Lakeview School, which generated no controversy, discussion, or nay votes even with the new owners of that property present.  The second was needed prior to approving a letter of support for the East Ludington Avenue Historic District, an area running inclusively from the 400 to 800 block of that thoroughfare, encompassing most of the area's bed and breakfast businesses.  Cheryl Czcodronski did a presentation emphasizing that the district was for historical designation only, and came with no kind of control over the homeowner's property rights.

Three citizens spoke at this hearing voicing support, one being Ray Madsen who supplied the initiative in getting the designation over several years, after the state historical district was voted down due to onerous controls over basic property rights.  The council approved it unanimously.

In committee generated business, the council granted amnesty for about $10,000 uncollectible debts prior to 2016, consisting mostly of businesses and people that no longer existed and deemed impossible to collect from.  They additionally let the two lots on Monona Street revert back to the Cartier family, the donated lots which had a restricted covenant that they were to be made into a playground.

As the long meeting wound down after the marijuana committee ordinance, they approved their routine authorization of fire service outside of the city limits, changed the 2nd Ward polling location to Trinity Evangelical Church (from the Petersen Auditorium which will be under construction this fall), approved the most popular items voted on for use of ARPA funds (leaving a little over $100,000 open for what projects were left-- to be decided at a future meeting), and approved an easement in Waterfront Park for Consumer's Energy to erect a small structure to house monitoring equipment.

Thanks for the information X. Another comprehensive report regarding City matters. I might add that you provide the public with the only comprehensive reports on Council meetings. You are the Fox news of Ludiington while the LDN is the CNN of Ludington.

Unlike the LDN, I have to be a bit more comprehensive because I always supply the council's agenda packet materials and the video of these meetings.  I would be remiss if I didn't offer similar kudos to the COL for supplying these packets to the public and diligently video recording these meetings for over 10 years-- it shows some commitment to accountability and transparency.

Thumbs up X, another great job done, thanks.