The new hire for Fire Chief is classic Ludington.

Another example of the self licking lollipop.

Am I mistaken or didn't his wife get arrested for beating up a police officer and publicly harassed people on the street that she did not like?

Isn't his daughter the head of the Chamber?

You can't make this stuff up.

Ludington could not do a search and find new blood outside of the county?

Please correct me if I am wrong.

Sad, but true. It's been a force for years and if you dont like it you might as well get out of town because it is entrenched.  What I find ironic ad scary is the unexplained and little-investigated "burning" of the building that allowed for the new resource center.  Sure seems like something internally fishy went on there, causing doubt that they never found the cause or the possible arsonist.

I pray to God that if there is a corrupted force involved, that their sins will catch up with them soon.

I saw this coming a couple of years ago with John Henderson's face on the front page of the LDN, inspecting the details of the building of the new fire house and needing more money before it was done. Some older residents who have known what has gone on in our government have thought that the corrurption of John Henderson's regime goes deep.   He is a force that may look good on the outside and appear community-serving, but, imo, he has deceived many and been the source for our great debt and failure to focus on infrastructure needs, imo. Though he may have started out with some altruistic ideas, he has been twisted for self-serving and glory, more so, imo, and wanting to maintain his control over his pet dreams and probably pushing and grooming his daughter to do so, also to focus on downtown primarily while neglecting the residents and city needs.

He has fought hard and mean to suppress Tom Rotta for exposing lawlessness and corruption.  Steve Miller either played into the same self-serving gratification, imo, and/or was groomed for the position of mayor to continue the selection of John Henderson as a force in our government. 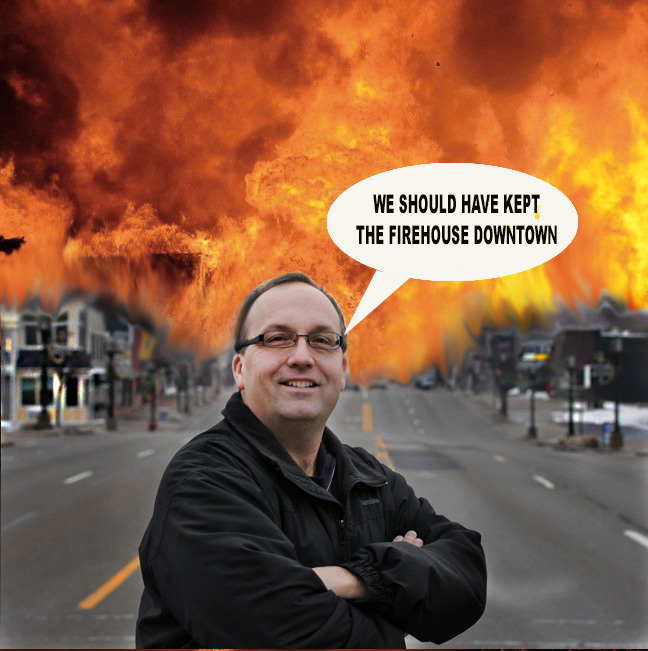 It’s really not that well done but thanks for the compliment, FS.

Does Henderson have any fire chief training?   And to comment on DU WRIGHTS statement on the mayor. From my view the Mayor looks far from being GROOMED. Looks like he just crawled out from under a rock.

Very funny, stump, about crawling out from under a rock!  That would maybe characterize his ethical behaviors, but I was speaking of "being groomed" in terms of "being on the same ticket" not about hairs!

An interesting, yet not unexpected appointment.  Henderson has been on the LFD for 29 years, he's been an officer for the last three years, he has helped train most of the members of the LPD over the last three decades competently, and he was just as competent as a firefighter and fire safety coordinator in the schools.

Yet one cannot ignore the underlying politics involved in this appointment of the former mayor of 12 years, a position he was much less competent at, as illustrated by the scandals plaguing his last two terms.  I see potential problems between the competing egos of current Mayor Steve Miller and Henderson, and fully expect the new chief will take an even more active role in defending corrupted City policy and staff against the XLFD menace.

Interesting comment, commending Henderson on his training and firefighting skills.  Maybe he should stick to fighting fires and not get into politics or financial matters of the city, because those may not be his best skills.  One who puts on a nice face of makeup while the body is dying.  I don't see a possible clash of egos between Steve Miller and John Henderson. Miller has been a puppet placeholder to continue Henderson's pet projects with Brandy Henderson playing a big mouth in every decision.  Only if the mayor wakes up and has an epiphany of whom he really serves will this city have real improvement.  Haven't seen that happen in Miller.  No one, none, except Serna, had the needs of the taxpayer in mind, and we know how Steve Miller treated her, his most vocal and emotional action as mayor, censorship of free speech for the people.

John Henderson's success as a fire chief will depend on how well he avoids over-politicizing the office. One of the understated duties of the fire chief position is to deal with all the politics coming from city hall, the media and the public in general, and a good chief acts as a buffer zone so that the rest of the department is insulated from it as much as possible.  It isn't an easy tightrope to walk, and Chief Funk made some mistakes in that regard, notably in the genesis of what led to this website.

Henderson has been enmeshed in city realpolitik for over two decades, unless he can better manage his ego and has developed some discretionary wisdom since his mayordom, he may ultimately leave many of his firefighters in the same condition as he left his ex-wife.

Whoa!!! X, do you know that former mayor Henderson has recently divorced the former first lady of Ludington?  And if I read your conclusion correctly, that he caused her hot rod Lincoln drinking? Well that has to be quite the conjecture.  If this is true, maybe her drinking led to him filing for divorce.  Quite the big gossip in little town Ludington.  You may be right though as it is not hard to see a bit of a control freak in the former mayor.  But that is sad.