On Thursday, January 7th, I happened to scroll past the Facebook feed of the local Talk of the Town featuring Heather Tykoski and Jen Tooman at a point where they were talking about the synthetic ice rink finding a new home in its third year at Waterfront Park.  When the DDA and certain local businesses bought a bunch of these boards and placed them at the James Street Plaza (home of the future Legacy Park) the Ludington Torch had pointed out that this wasn't the best place for it, because it was open to the elements, the ground was very uneven, and the dimensions allowable were just not conducive to ice skating.

When I was taking pictures down at the plaza two years ago, I confided with my photographer that the rink would be better suited to be at the Waterfront Park pavilion, as there would be shelter from above and from the north winds of winter, a very level ground, and the capacity to widen its dimensions.  I do not know whether that observation trickled down to the administrative staff at the local DDA, but they did make the change this year when the plaza became unusable due to construction happening there.

That morning, I also noticed that the city council was scheduled to have a 'meeting' down at Harbor View Marina's clubhouse that very afternoon, so I visited the nearby rink while waiting for the meeting to commence.  I saw six people around the ice rink, four kids skating on the ice and a couple of adults monitoring them.  I circumnavigated around the pavilion taking mental notes and went back towards the meeting that I could not attend as a citizen due to the City's policy on who is not allowed to be at the marina's clubhouse and my oath to a LPD sergeant that I would not step foot in the clubhouse (since I didn't want to be arrested).

Nobody in Michigan needs to be reminded that there has been a lot of twisted public policies being passed down from the governor and from the state's health department over the last ten months.  Large parts of the economy have been shut down, whether it be barbershops, bars, or bowling alleys.  In the State's latest batch of micromanaging the economy into oblivion, they have made a decree about outdoor ice rinks, because (*sarcasm*) everybody knows that they and their indoor equivalents are super-spreader events in the making.

To those ends, the MDH&HS Director Robert Gordon issued an emergency order on December 18th, lasting until January 15th, that expressly says:  "Gatherings at outdoor ice and roller rinks are permitted, except for organized contact sports, provided that occupancy is limited to 2 persons per 1,000 square feet."  This is also clarified in the second to the last paragraph of their graphic summary of that order.  I revisited the rink on Saturday: 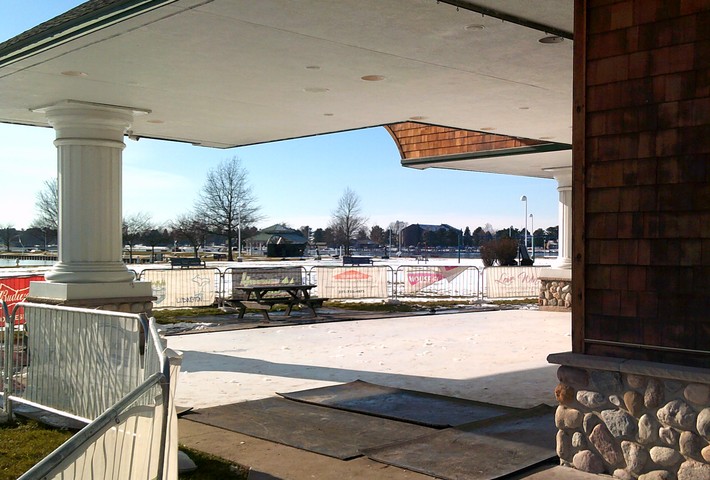 Coming from the east, there is no sign warning the public about the state's limitations on skaters or any other sign regarding other Covid-19 precautions such as wearing a mask while skating.  The ice rink itself is an odd shaped polygon roughly 1000 square feet in area, which would allow only two people to be able to use the rink at a time.  This needs to be pointed out with a sign, as well as the state requirement for wearing a mask enshrined in the 12-18-2020 order. 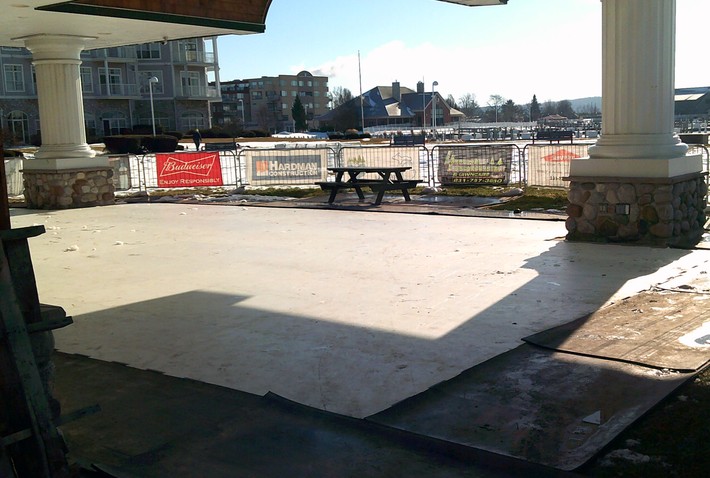 Coming from the west side, there are still no signs, other than the banners surrounding the rink advertising local businesses, several effectively shut down or restricted at this time.  The four mask-less kids gathered at the ice rink on Thursday didn't likely know they were violating the law by overcrowding the rink and for their refusal to wear a mask.

It's typical that a state subdivision like the City of Ludington thinks it can avoid the rules just because the State will not pursue them as if they were a private business.  Witness what happened this summer when the State tried to shut down private water parks while allowing municipal-operated water parks and splash pads to continue operating without harassment.  While Ludington has been operating its ice rink for two weeks without any 'emergency order' oversight, private businesses have had to take great pains to abide by them, such as Johnny's Skate Center in Custer: 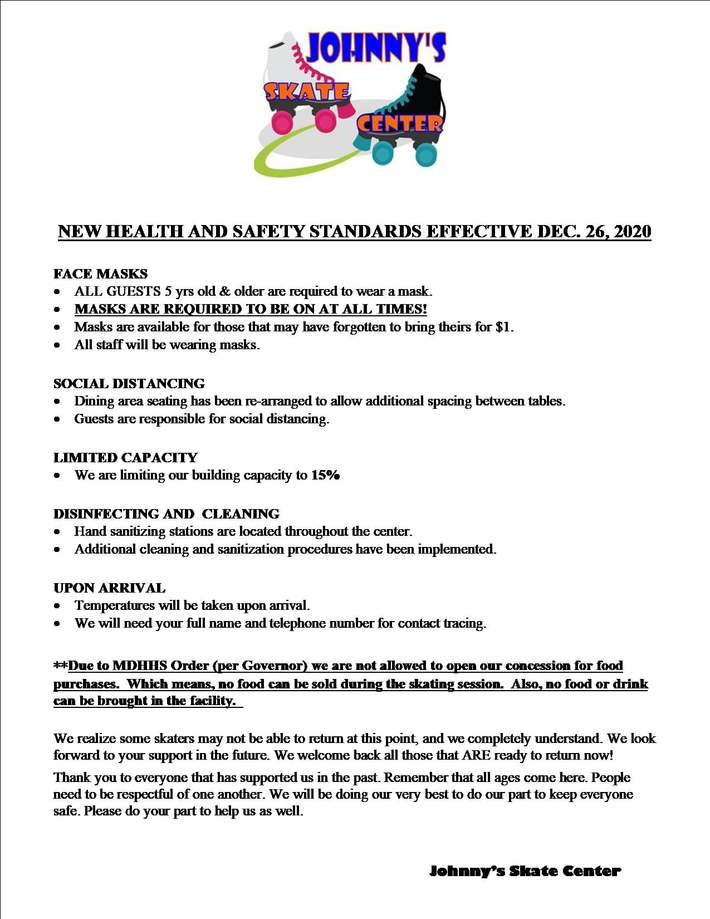 If Johnny's was not abiding by the emergency order rules, as the City of Ludington is currently not doing, they would risk having their licensing suspended and facing stiff fines.  As they obey state rules, the owners of Johnny's not only sacrifice a large amount of potential earnings, but also show they care about the community's commitment to public health while the fiscal health of their business is on thin ice.  The City of Ludington will earn a lot more in property taxes next year regardless of whether their synthetic ice rink has any skaters or whether they follow the rules.

The same mindset in place again: these rules are for thee, but not me, says the COL to the public. I'm sure Mr. Tykoski will be shortly getting a call for more new signage now, without competitive bidding, so he and Heather can reap more financial benefits to all this, sad, but just watch and see it happen again.

Over the last year, we have seen this occur all too often, locally, statewide, and even nationally.  The tyrants in power put a lot of restrictions on the people and their small businesses, while the major corporations and their buddies in the government ignore and profit from those very limitations.  It's surprising that Heather hadn't already drew up a sign contract with her husband's company, as per usual protocol.

That was a good idea X. Using that space for the fake ice rink makes sense. Then in comes the idiots in Government limiting the number of people who can use it. 2 people per 1,000 sq. ft. is just plain stupid. I wonder how long people will put up with this BS.