One month ago, the City of Ludington settled a lawsuit filed by a veteran with PTSD who claimed that the siren located at Copeyon Park, which sounded daily at noon and 10 PM (minor curfew time), was aggravating his condition.  The settlement terms silenced the siren except for noon on Saturdays and had the City pay the plaintiffs' filing fee.  Plaintiffs' attorney James Koning would claim it as a big victory for his client and add:

“This was a victory for everybody, because those that want nostalgia can have their nostalgia, and my clients can hopefully get on with their lives."

Koning seems to think that the community's nostalgia is preserved by reducing the sounding of the siren from 14 times each week to once a week.  But he and other attorneys filing the lawsuit tried to minimize the nostalgic feelings citizens have regarding the siren and maximize the debilitative effect the siren has on their client's PTSD.  Koning had said shortly after filing the original lawsuit:

“What we’re hearing is ‘we like (the siren) because it’s nostalgic, it reminds us of the good ‘ole days.  No one has come up with any sort of reason why it is a necessity or even for the public good other than this nostalgia.  (My client) did two tours in Afghanistan, and one in Iraq, who is suffering from PTSD, and that this is causing severe problems for him."

Over 300 years ago, Johannes Hofer had championed the term “nostalgia” when he made the first concerted attempts to categorize and diagnose the manifestations of acute combat reaction in his 1688 medical dissertation, a term that was used for hundreds of years, even in the American Civil War.  Nostalgia WAS post-traumatic stress disorder in the 18th and 19th century.  Only in the early twentieth century would "nostalgia" be supplanted by "battle fatigue" and PTSD in the language, and gradually become associated with an event triggering good memories.

This then is our first conundrum:  How can the plaintiffs' attorney repeatedly diminish the effects of a full community's nostalgia while simultaneously emphasizing the effects of an individual's PTSD when both are triggered by the same source? 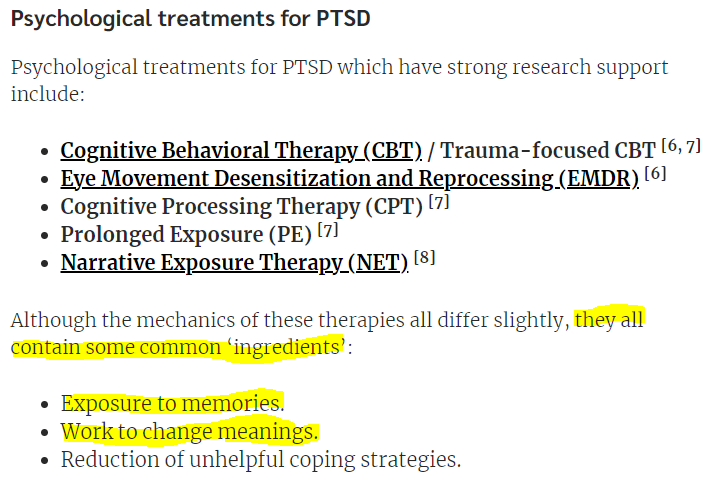 City Manager Mitch Foster, trying to sell this capitulating settlement, noted:  "(The settlement) allows the city to recognize that, even an individual veteran like this, who was dealing with an issue like PTSD, that we’re trying to be considerate of that issue, as well.”

But was this action considerate with the plaintiff's well-being?  In an article from Psychology Tools, the above therapies for treating PTSD all contain three basic ingredients, two of those are exposing the afflicted to the memories and working to change the meanings of those memories.  Thanks to the City of Ludington relocating the siren nearby, the veteran would presumably be triggered into his painful past memories at each sounding and be able to re-associate those memories with the realization that the noise he was hearing was only a harmless notification that it was noon or 10 PM, and that thousands of his fellow Ludingtonians loved to hear that sound before going to lunch or checking to make sure their kids were home safe.

Veteran Nathaniel Rose heard that siren twice a day for half a year before he decided to bring the issue to the attention of the City of Ludington, so apparently, he had developed some sort of coping strategy that wasn't completely successful.  Had he tried to seek a good therapist (rather than eschew such help), one who would instruct him on how to change the meaning of the twice-a-day exposures to a noise that originated from the top of a nearby park bathroom, from a memory of one many hundreds of miles, overseas, and many years from the similar alert that allegedly was the source of his PTSD, then it's conceivable that he might one day associate that sound with nostalgia of being cured of his situational PTSD.  Rose was one good therapist away from getting over his siren-caused PTSD.

That effectively is the second conundrum: now that the noon and curfew siren has been successfully silenced, Nathaniel Rose will be less likely to be cured of his siren-triggered PTSD and is more likely to suffer worse PTSD if he is surprised by that noon Saturday siren or any sort of similar noise.

Permalink Reply by Douglas Robertson on May 31, 2022 at 9:07am
I’m Curious on how long he has lived in our town

Not very long, according to public records.  If you are also curious about how long our Traverse City based city attorney and Grand Rapids based civil attorney (those who heavily influenced our council's vote) has lived in our town, the answer to that is they never have.

Douglas, not that long now, another transient that expects new changes just for him as a newcomer.

Permalink Reply by Douglas Robertson on May 31, 2022 at 5:41pm
I remember seeing him at there business when it was on south James st 5 or six years ago

Let's not forget that the siren was moved from it's "nostalgic" location which nullifies the good nostalgia because of the change in it's geo location. I'm sure there are plenty of people near it's new location that are not pleased with it's close proximity to their homes. There never would have been a lawsuit if the siren had been returned to it's original location. Then again maybe the new condos and apartment dwellers had a role in getting the nostalgic noise maker moved out of their neighborhood. "The siren conspiracy"?

Residents along the Gulf Coast suffer PTSD when hearing a siren, more so when awakened at night. The results of living in a hurricane region.  As natural gas expands in Gulf, residents fear rising damage - Amer...

The decision to end the noon siren was a City Council decision. The plaintive wanted the 10 pm sounding curtailed as it interfered with his sleep much as the sirens along the Gulf Coast triggered the locals when sleeping. Seems he could brace himself for the noon sounding.

Was the 10 pm curfew more of a remanent of a sundown law warning as well as being a curfew courtesy call? Hmmmm.

Another poor decision by the City Council wasting taxpayers' money.

Thanks Shinblind, another great observation and reflection on this matter, well said.