In some municipalities, a new trend is taking place:  removing traffic signals from intersections and replacing them with all-way stops.  A Streetsblog article from 2018 featured recently by other media, point to a book published also in 2018 called "Walkable City Rules" and specifically Rule 76 which simply states:

"Replace Signals with All-way Stops" In many places, stop signs are the safest solution.

In Explanation:  "For many years, cities inserted traffic signals at their intersections as a matter of pride, with the sentiment that more signals made a place more modern and cosmopolitan. Recently, that dynamic has begun to change, as concerns about road safety have caused many to question whether signals are the best solution for intersections experiencing moderate traffic.

Research now suggests that all-way stop signs, which ask motorists to approach each intersection as a negotiation, turn out to be much safer than signals.  Unlike with signals, no law-abiding driver ever passes an all-way stop sign at more than a very low speed, and there is considerable eye contact among users."

The article concludes:  "There is no reason to conduct an expensive study on this subject. For each intersection with traffic that is moderate and fairly balanced, conduct a one-week test of an all-way stop configuration. If problems don’t arise, make it permanent."

Reading further we find that the 'research' supporting this move comes from a study conducted in Philadelphia five decades ago in 1978.  The study's abstract notes:  "The effect on intersection crashes of converting one-way street intersections in Philadelphia from signal to multiway stop sign control was estimated... Aggregate results indicate that replacing signals by multiway stop signs on one-way streets is associated with a reduction in crashes of approximately 24%, combining all severities, light conditions, and impact types." Beyond the issue that 1978 and 2020 traffic and street infrastructure differ significantly, the study has another major limitation.  The signals-to-signs switch were only done to one-way street intersections, where an all-way stop would be a two-way stop.  Despite those limitations, many cities are switching their signals out under the guise of promoting safety and walkability.

One of these cities is St. Joseph, Missouri.  They explored the issue last year after sanctioning a traffic study (which looked at traffic flow, accident reports and wait times) by a private group that suggested replacing signals with signs at most downtown intersections.  Review of internet sources and the St. Joseph webpage does not reveal the referenced study anywhere, but the city's traffic commission voted to replace over 90% of the signals (22 0f 24) with stop signed intersections.

St. Joseph's mayor explained before the council eventually agreed issued the following rigor-free analysis:  “I’m no traffic engineer, so I’ll trust the experts. This is their recommendation and they’re going to put an ordinance before the council."  With the usual grief from the public and the endorsement by downtown merchants thinking slower moving traffic might be more interested in stopping and shopping in a downtown currently mostly closed due to Covid-19, this ordinance eventually passed, and the change has been implemented over five two month phases (phase 3 has just began).

Kingston, NY council virtually agreed to do the same thing in their community in August, with a very incomplete traffic study.  In Michigan, Bay City is set to do the same with a study that is even more incomplete and presumptuous.

“It’s, I think, a really good step in making the downtown a walkable, welcoming place that is easy for people to traverse and get rid of the congestion that is sometimes taking place with the lights," said Bay City Commissioner Kristen MacDonald Rivet.

It appears that these changes are driven by the hope that it will make the downtown more visitable and walkable, but it's not immediately clear whether it would be safer or more efficient for pedestrians at those intersections being switched.   None of the referenced studies at either of the three cities seem to rely on traffic volume data, rather they look at crash data and make the conclusion that high numbers indicate unwarranted signals being used.

Through experience, I can claim unequivocally that four-way stops are a lot less bicycle-friendly than signaled intersections.  It would also seem that pedestrian safety would be compromised at most moderately busy four-way intersections, though fatal accidents may be less. 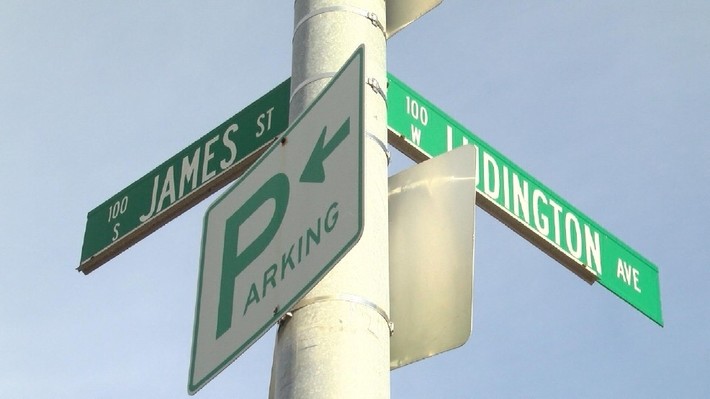 Do you believe that there are any signalized intersections in Ludington that would be better off with all-way stop signs?

That was very interesting.  It's amazing how many varieties of intersection solutions exist and how geometrically beautiful they are.