Well, it appears what we discussed in regard to more cluster housing in Ludington is coming our way. Please read the recent City Council meeting minutes and note the desire to change single family housing zoning to two family and even three family homes on lots that are currently zoned single family housing. Add short term rentals and affordable housing to that mix and we have the Obama Housing Alliance dream (even though Trump has put a hold on it) happening at the hands of a greedy leftest city council. If we do not have some common sense minded Republicans run for local office soon, we are in big trouble folks.

What really bothers me is that if one buys a house in a nice neighborhood of single family homes that have been there since as early as 1900's , with one sweep of a pen from city council you could be living next to a three family monster before you know it. What happens if there is a double lot next to you? Does that mean six units? See where this is going?

And don't get me going on the people who are turning their driveways into RV pads and renting them out for the summer! Take a walk around the outskirts of the city and you see a lot of questionable things going on...

Ludington is in a death spiral.

What is this about RV pads being rented out? Where on the outskirts is this happening? I can't imagine that is a legal activity.

As for the changes the Council is considering; those items were considered by a fairly Republican heavy Planning Commission which gave their recommendation (albeit 6-3). My understanding is that this is already allowed in other areas of primarily single-family zoning, but this expands the ability but still would require a special land use permit. So if the neighbors don't like it, they can go to the Planning Commission meeting and express their concern, and watch the permit be turned down as it was last year with a similar situation on the north side of town. Therefore, if it does get approved, it won't necessarily lead to a massive increase in two- or three-family dwellings overnight without neighborhood input.

I would agree this isn't a 'partisan' issue, in that arguably the most-notably liberal voice on the LPC, Kathy Winczewski, voted against the changes along with a couple of conservative members.

What bothers me is that I know of several multi-unit properties that became single-family dwellings back around 2016 when rental inspections came into existence and the housing 'crisis' then was exacerbated by all of the rental properties that vanished and have never come back.  Now they are offering enticements to have them switch back; it seems inefficient. But you can't qualify for those obtuse grants w/o jumping through the hoops and ruining the organic evolution of a city.

This is the first I have heard of anyone renting out driveways for RV pads. It's a novel idea but I doubt the City would allow it. Anything to make a buck. Many people don't realize how impactful zoning laws can be and they fail to keep up with what local politicians are doing. A perfect example is the can of beans house being built over on Buttersville. 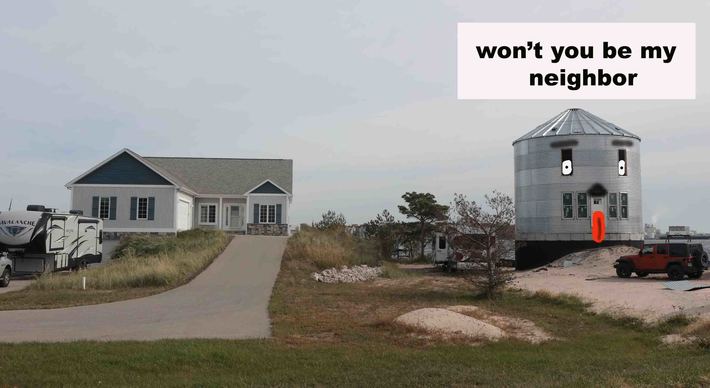 Please message me with addresses or send your own photos, Lake Lady, of places where RVs have been staying for long periods of time.  I don't think this has been an issue widely spread, but I wouldn't mind monitoring those places for a few days.

I was out on the Buttersville Peninsula the other day showing some visitors the sites, primarily the PM Memorial since a couple hadn't seen it since the renovation.  They were still busy working on the silo house.  My guests were young, so most thought it was kind of neat, but they did agree that it does stick out among the other houses.

I am out of town for the weekend ,but will take photos upon my return. Just take a drive up and down the south side of Tinkham and you will see it. I recommend early evening walks up and down the alleys and roads of downtown Ludington. You see all sorts of stuff that will peak your interest in regard to laws and rules of the town governance being sidestepped or completely ignored.

I agree that a property owner can cause a stir if someone wants to build a newly zoned commercial rental enterprise next to them... but then again... that would be if one was informed of such a plan ( Ludington is famous for pushing things ahead without anyones knowledge right?) and...at the risk of being cancelled by the cool kids on the boards for causing trouble.. just sayin...

The trailer pad with  a high end trailer and newly created fire pit on North Robert / Tinkham is the most bold member of the camper in town group but there are many more examples. They  seem to be growing by the week.

Two more on Robert alone, three on Lakeview. These are just two streets. People are clearly living all summer in these campers and some people are renting them out. This has got to be against the single family zoning. It appears that the town is doing absolutely nothing about inforcement and as a result, more and more people are doing it. It is not a nice look for the City in my opinion and not fair to the people in the neighborhoods. Even if it is family living in these trailers, I do not feel it should be allowed for a variety of reasons. I would love to hear what the Bloggers think...

Permalink Reply by Freedom Seeker on August 9, 2020 at 8:27pm
I understand what you mean, Lake Lady. I'd love to make $500 or so a week renting out a motorhome, without having to go through any rental guidelines or fees! (But I wouldnt). I agree it makes the town look shabby.... along with many cars parked in the easements. Trailers on the streets, with stabilizer jacks, cords running across the sidewalks even worse and dangerous for traffic siteline. I thought there was a brewhaha about this last year when Councilor Serna brought it up that there are already codes on the book against this and they aren't being enforced. They Councilor Serna was publicly reprimanded for being sassy at council or something.

Yes, Serna is the only courageous voice of reason in my opinion. She has been censured by the group for going against the group think .They did publicly shame her which was a classless move .

We all know, if you live in the city, we pay an obscene amount of taxes on our land and dwellings. Campers on properties being used as dwellings (  and commercial rental income properties) should have to pay taxes as well in my opinion since they are using the same roads and services we are. The owners that are allowed to do this are taking advantage of us who don't. There are also issues of sewer, water and electricity and probably cable and internet service too. I believe that no one should be allowed to have anyone living in trailers for any reason on their property in the city.

This city council needs to get their @%&* in order and start doing their jobs... We really need to have some common sense people run for City Council office. I would love to do it , but I am out of the city for a few months every winter. Any takers?!!? :) I'll contribute money for signs and a campaign. :)

The city doesn't do anything about the vacation rentals that are now in the city either. They advertise on VRBO and are in the city limits.  They are not the condos . It's easier to turn a blind eye then do their job enforcing what"s on the books.

Permalink Reply by Freedom Seeker on August 10, 2020 at 3:45pm
Isn't that unfair to the person who has to pay a fee to rent out their home? I'm not for fees and more restrictive codes except where there is obvious abuse and blight, but rules should be fairly enforced.

Maybe someone from the city is reading the torch.  I just received a call from the Ludington police dept. about a motor home in my driveway.  Turns out it was at a property that I had sold last year.  I did notice it there  and I do not think he would be renting it out .  It is setting on a concrete drive, not on the grass. So is it against a city ordinance now to park in your driveway?