Violations of Procedure by Ferguson Police Indicate Guilt of Other Violations

Following the controversial fatal shooting of Michael Brown by Ferguson Police Department Derren Wilson there has been a barrage of bullets from both sides of the issue claiming the innocence of their side and the guilt of the other.  The police have claimed that the shooting was a proper use of force based on the overall circumstances of the encounter, and have offered their spokesmen, the officer's record and recollections, and clips from Brown's intense interaction at a convenience store to bolster their position.

The other side has witnesses that say otherwise, point to the inconclusive evidence of the coroner's report, and have elevated the problem into a racial issue, where perhaps one does not exist.  They have took to little more than rioting in the streets and have often reverted to looting and pillaging the local neighborhood, which only served to bring in more police forces to quell, and made both sides look ridiculous in their tactics.

The truth and answers as to what happened may have been solved so easily if Officer Wilson had been equipped with a camera or at least if he was miked when he interacted in this stop.  Barring that, we have witnesses that say Brown was gunned down, and witnesses that say Brown had assaulted Wilson and was shot in self-defense.  Both seem implausible.

But the way the authorities have responded after a couple of weeks has left me with the impression that they were in the wrong.  This is not due to the arrests of journalists or the use of paramilitary gear and tactics; these just show their own concerns of safety over the art of diplomacy, and what is to be expected from today's police forces.  My impression is due to the way they have responded to calls for information throughout the event.  Following protocols and transparency is the key to finding the truth as to what happened in Ferguson, and the police are doing about as good a job in maintaining order in that regard than they have been at maintaining order in the streets.

The following article is printed in its entirety from Charlie Grapski, writing for Photography is Not a Crime showing in a very well presented manner that the authorities in this case have not been upfront and have not been following protocol by a long way.  Holding a bunch of irresponsible lawless rioters, looters and Al Sharpton against the other side makes no sense-- these people are opportunists.  But when the authorities cannot make required reports and follow laws made to make their actions transparent, then that needs to be taken into the equation.  Maybe, just maybe, Officer Derren Wilson wasn't following procedure also. 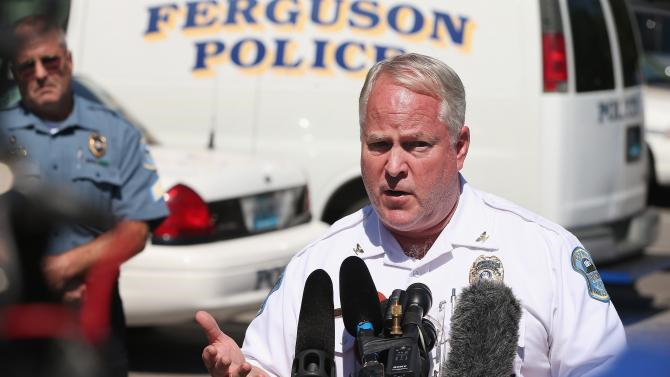 Everyone who is paying attention to the incident in which Mike Brown was gunned down in the streets of Ferguson, Missouri by Officer Darren Wilson is aware that there is no actual “Incident Report” in existence. Well, more specifically, a week after the ACLU requested the report and was told that there was a report but it was being withheld because it was exempt from the Sunshine Law, they produced “an” Incident Report that had no useful information in it.

What we now can state firmly in addition to this is that Ferguson Police also do not have a Use of Force Report that their policies required to be produced – not by Officer Wilson but by the Watch Commander on duty that day.

Ferguson is deliberately violating both the laws and its own policies to prevent any information from being produced and made public that could be used to hold Officer Wilson to account for his actions. This is a serious problem of cover up, abuse of authority, and contempt of the law by both the Ferguson and St. Louis County Police Departments. Given the evidence there is ample reason for the public to have little, or no, confidence or trust in either of these agencies.

I have  detailed the story of how that document was created after and upon a request I made – along with 160 others – challenging the claim that this was exempt under the public records law. It clearly was not. So the St. Louis County Police Department created one almost two weeks after the incident and a day after my request.

It was then produced the day after that – to the amazement of all who looked at it. It contained nothing but the date, time and location of the incident.

Following their lead the Ferguson Police Department then produced a similar document alleging to be the required Incident Report.
But there were other records required to have been produced in this incident that should provide more information as to the facts of those events and that the public has a right to access. In particular a required Use of Force Report – specifically referred in Ferguson Police Policy on the Use of Force as an F-080 report.

Not having yet received the Ferguson Use of Force Policy but armed with their Police Report Procedures – a policy I also had obtained under the state’s Sunshine (public records) Law – I asked for all statements or reports pertaining to the use of force by Officer Wilson. 406.02 (A) 3 clearly states that when there is a “use of force” the officer is required to file a report. [See the Policy linked in this story below]

I made a request for that report on August 23rd and that same day received an email from Stephanie Kerr. Kerr, a private attorney with the firm of Curtis, Heinz, Garrett and O’Keefe, has been contracted by the City of Ferguson to provide them the services of the City Attorney. City Attorneys are not attorneys that represent the City in a lawsuit – but who advise the City on how to be in full and faithful compliance with the law in all their activities. Kerr responded to this request with the following statement:

“The Incident Report has previously been provided to you. The City of Ferguson has no other documents which are responsive to your request.”

[AUGUST 23rd RESPONSE: NO USE OF FORCE STATEMENTS EXIST]

But the Incident Report referenced here, in addition to its not meeting the legal definition of such or being in compliance with the requirements established in the Report policy, was not what was requested. What was clearly requested were all use of force statements – also required by that policy.

Sure enough there was an explicit policy that required that not just Officer Wilson, but because he used deadly force causing injury, that the Watch Commander on the date of the shooting produce an F 080 Report for that Use of Force.

Perhaps, I surmised, they did not provide this to me in the first request because I did not specifically ask for this report – it should have covered all such reports, as I did not confine it to reports filed by Wislon, but perhaps they misunderstood.

So on August 28th I followed up again. This time I specifically requested the F 080 Report.

410.05 of that policy sets out the procedures required to be followed whenever an officer uses “lethal force.”   In particular, under that chapter, section D sets out “Procedures to be Followed When a Firearm is Discharged (Gunshot Wound Inflicted).”

Under that section part 4 states:

4. The watch commander will complete the Use of Force Report F-080 and forward it through the chain of command to the Chief.

This puts an explicit obligation on the “watch commander” – not just the other requirements of Officer Wilson to file reports – to complete an explicitly defined Report – the F-080 Report – and that this report will go up through the chain of command all the way “to the Chief.”

If this policy was not fully and faithfully followed this implicates – beyond the issue of Officer Wilson and the Incident Report – Wilson’s superior officers, from the Watch Commander all the way through the Chief, in wrongdoing.

Thus if the Department were following its procedures fully and faithfully there should be an F 080 Report. Filled out by the Watch Commander. And received by the Chief.

But today, August 29th, I received a response to my second follow up request – specifically seeking any F 080 Report prescribed under that policy.

This was the response I received:

“The City of Ferguson has no ‘Use of Force Report’ relating to the Michael Brown shooting; therefore there are no documents which are responsive to this request.”

In this case the absence of evidence is evidence of absence.  Absence of routinely produced and explicitly filed reports that are necessary if the police are to faithfully fulfill their legal obligations to the community.

If anything positive may come from the tragedy of this event, perhaps it may be a wider knowledge and understading in the public of their right to obtain public records from their public agencies and officials.  And a recognition of the immense power these laws – if respected by officials and enforced under the law – provide to citizens seeking to hold public officials and agencies to account under those same laws they are entrusted to enforce.

For even the response that there is no record as requested provides evidence.  It is an answer to the question, in this case, did the Ferguson Police Department, including the Chief of Police , follow the law and the Department’s policies?

The answer is now clear.

The Chief, the Watch Commander, others in the department, and Officer Wilson do not believe they are subject to the law.

They have, at best, some different set of laws or standard of law that they believe they must obey – just not the laws on the books. Not even their own Departmental policies are binding according to their actions.

This leaves us without any knowledge of just what occurred on the day of the fatal shooting of Mike Brown.  It suspiciously allows Officer Wilson, and the rest of the Ferguson Police Department, to wait until all the evidence against Wilson is discovered and collected, and afterwards to write reports that will neatly fit the evidence.  Rather than to have those required reports serve in the evidentiary capacity that they were intended.

But the absence of records and reports does not leave us entirely in the dark.

We have proof of one thing: the entire department (actually two departments) are actively defying the law and their policies to cover-up the facts of what Officer Wilson did that day.  And to deny the right of the public to obtain those facts in the records the police are required to keep.

In this case, therefore, there is ample reason – in fact actual evidence – for the public to have no faith or confidence in anything these Departments, their officials, or the officers employed therein do or say. And certainly there is no reason to trust that they can honestly and faithfully participate in the process inquiring into and investigating the shooting by Officer Wilson.