What happened in Antrim County this election cycle to make it first appear that this traditionally red, conservative county of 23,000 or so people had came out in the majority for Democratic presidential candidate Joe Biden?

The problem has since been corrected following a hand recount of the ballots, but this came after political observers had expressed shock early Wednesday when the county transferred numbers to the state showing Biden beating Trump by about 3,000 votes.  Antrim is a lot like Mason County where local GOP officials have mostly run unopposed in recent elections, and more often than not, win by double digits when opposed by Democrat challengers.

County Clerk Sheryl Guy, running as an unopposed Republican candidate this year, initially sent in the results to the state without checking the unexpected results.  In 2016, Trump had beat Hillary Clinton in the county by 4000 votes with 62 percent of the vote.  Guy was unclear on whether the apparent errors resulted from a software glitch or human error, but appeared to attribute the problem to a combination of both without any in-depth explanation. Local election officials say the problem occurred when precinct-level numbers were combined into candidate vote totals and transferred to the state.  Late Friday, state election officials said the errors were caused because Guy failed to update election management system software used to combine the electronic totals from tabulators and submit a report of unofficial results.

The county uses Dominion Voting Systems equipment and the results were manually transported on computer cards from the precincts to county offices in Antrim County, where they were uploaded onto another computer, then sent to the state.  The initial results have been compared to the results after the ballots were hand-counted, and one can make out better where the error occurred in some townships: 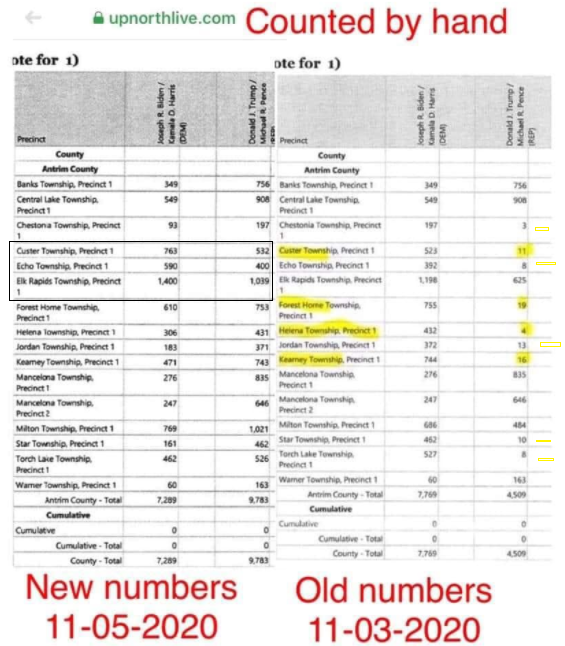 As you can see, in nine townships Biden received roughly the same number of votes that Trump received after the hand-count, similarly the small number of votes Trump was initially credited with was likely that of one of the third party candidates.  This suggests the software tabulated Trump votes as Biden votes, and another lesser candidate's votes as Trump votes.  It still leaves one wondering how no official questioned the results found in these tabulations below that shows how many registered voters voted in the Antrim County elections, and shows that the number of voters in three precincts greatly exceeded that number: 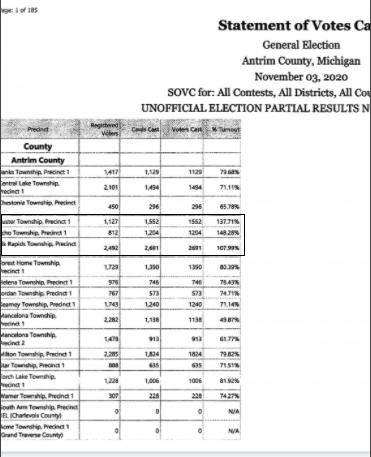 If you read the two stats provided closely you will note that there were only three precincts that had more Biden votes than Trump votes (see black box in original chart), only three.  These three precincts coincidentally were the only ones that had more voters than they had registered voters (see black box in second chart).  This suggest that there may have been some ballot stuffing in these precincts which had Biden winning with over 57% of the recorded vote (including all of those unregistered voters voting illegally).  Only one other precinct had Trump winning with less than 57% of the vote.  Without those three over-voting precincts, Trump won well over 60% of Antrim's votes and Biden had less than 40%.

How does one write this off as a computer glitch or even human clerical error?  It suggests that there was either willful fraud by a Biden supporter/Never-Trumper deeply embedded in a deeply Republican county or something malicious in the software provided for counting the votes.

The latter seems more likely since Dominion Voting Systems has ties with the Democrat Party:  influential CA Senator Dianne Feinstein's husband is a major stockholder of the company, while fellow CA Representative Nancy Pelosi’s Chief of Staff Is Chief Executive of the company.  Likewise, the progressive news media misses many of these issues or misreports other relevant facts, consider WOOD's report:

At 2:00 into the video the announcer notes for Antrim County:  "President Trump trailed Joe Biden by some 45,000 votes at one point."  How does one candidate trail another in a county of 23,000 by 45,000 votes?  This is about as likely as 130,000 votes being cast for one candidate over another in a deeply divided country, or for a well-populated precinct having 100% of their voters go for one candidate, while their peers in the state are voting primarily for the other candidate.

We can fix the issues of this crooked election now, or allow them to fester and ruin any future elections, thereby destroying our democracy.

Permalink Reply by Freedom Seeker on November 9, 2020 at 8:28am
If this doesn't prove there is a problem with the voting process, what will? Good article, X. Change.org is collecting signatures for a nationwide recount. I tried to paste it below.

Thanks for posting this information X. 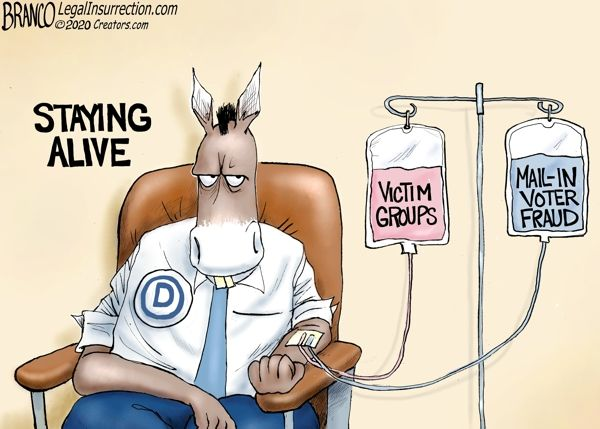