I know this is an old story but if anyone is paying attention it clearly shows how absurd the Left truly is. Brittany Griner received millions of dollars and untold accolades for simply playing a child's game. She is, or should I say, was a star player in women's basketball and was handsomely rewarded for her talent in that sport. However, that was not enough for her. She had to whine about the oppressive U.S. and even called for the cancellation of the National Anthem at her basketball games. I for one am sick and tired of these whiny leftists who are completely out of touch with reality. Unfortunately for her she now is discovering what real oppression is all about. Even tho I believe she was targeted by the Russians, she herself, in all her arrogant glory did this to herself by carrying an illegal substance across the Russian border. Now she wants the oppressive U.S. to come to her rescue. I say let her stew in her new found Leftist Russian freedom for a while. She just might learn something about how the World really works and who the true oppressors are. 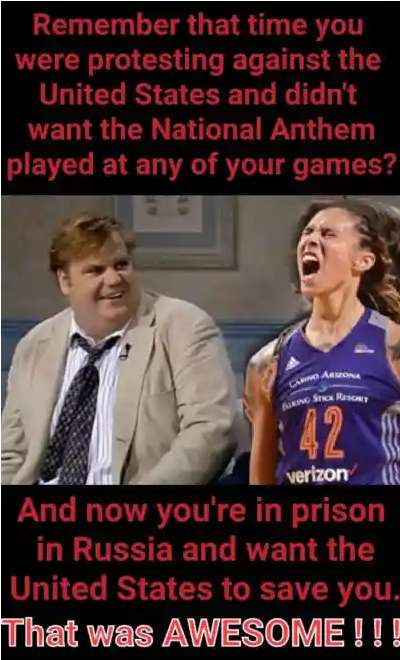 "The WNBA star (and Russian basketball player), Brittney Griner, a Black Lives Matter supporter, isn’t just a kneeler. She doesn’t want the national anthem played at her games and wouldn’t go on the floor during the anthem.

Griner is being held in Russia and faces ten years in jail because of a drug charge, having been found with hash vape pens in her luggage.

She was playing in Russia because she didn’t feel she was making enough money in the States. Griner was playing off-season in Russia for $1 million.

She told reporters at the time:

“I honestly feel we should not play the national anthem during our season,” Griner said, per The Arizona Republic. “I think we should take that much of a stand.”

She kept the protest up:

“I’m going to protest regardless,” she said. “I’m not going to be out there for the national anthem. If the league continues to want to play it, that’s fine. It will be all season long, I’ll not be out there. I feel like more are going to probably do the same thing. I can only speak for myself.”

I'll start giving a flick about Griner's plight once our federal government starts giving a flick about our own political prisoners, those good people still imprisoned for being ushered into the capitol over a year and a half ago and otherwise doing nothing illegal in an operation assuredly crafted by the FBI in order to upend the election challenges taking place that day.  You may have missed this obituary of one of them:

"Matthew Lawrence Perna died on February 25, 2022 of a broken heart. His community (which he loved), his country, and the justice system killed his spirit and his zest for life...

He attended the rally on January 6, 2021 to peacefully stand up for his beliefs. After learning that the FBI was looking for him, he immediately turned himself in. He entered the Capitol through a previously opened door (he did not break in as was reported) where he was ushered in by police. He didn't break, touch, or steal anything. He did not harm anyone, as he stayed within the velvet ropes taking pictures. For this act he has been persecuted by many members of his community, friends, relatives, and people who had never met him. Many people were quietly supportive, and Matt was truly grateful for them. The constant delays in hearings, and postponements dragged out for over a year. Because of this, Matt's heart broke and his spirit died, and many people are responsible for the pain he endured. Matt did not have a hateful bone in his body. He embraced people of all races, income brackets, and beliefs, never once berating anyone for having different views."

Perna was reportedly facing up to 20 years in prison for the "felony obstruction of Congress" charge, an offense which allegedly included a whopping 20 minutes spent taking videos in the lobby of the U.S. Senate.  In comparison, Russia has been merciful with the idiot athlete who possessed illegal substances, knowing the consequences; she is not a political prisoner unlike Mr. Perna was before he had had enough.

I don't understand the people that say that she was illegally arrested, it's like they don't comprehend that she isn't in the US or something, I've seen more than a few post saying things along the lines of "pot is legal in the states".. well  yeah, that's here in the states, not in Russia. She took responsibility by pleading guilty, not sure how anyone with that info can say she's being illegally held. If you're planning on traveling to a foreign country, you best be sure to know what their laws are. Russia is very strict when it comes to drugs of pretty much any kind, you get busted you're going to do time. Back n the 90s some of you will remember a guy, I believe his name was Michael Fay that got arrested for vandalizing cars and stealing road signs in Singapore. He was sentenced to being caned 6 times, they did relent a little and he ended up with getting caned 4 times instead, he also spent about 6 months in prison.

You do the crime, you do the time.