Counterpoint: Freedom is an Entitlement

Scottville City Commissioner Rob Alway recently published a provocatively titled piece declaring that entitlements do not include community events.  Now certainly, as a city commissioner he has probably received some grief from constituents since practically every Scottville summer community event has been shelved, including the Harvest Festival hybrid-- which traditionally has taken place towards the first day of fall, more than 100 days in the future. 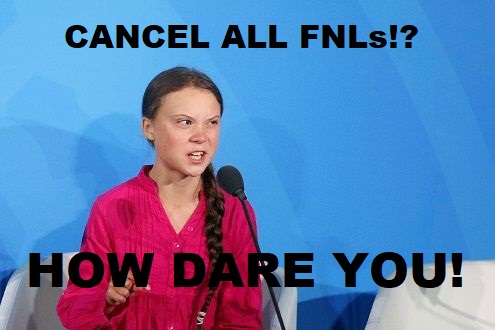 He has also encountered lamentations and outrage when he has posted many of the events cancelled this summer already in Ludington on his website.  Earlier in the day before his editorial, he broke the news that the Friday Night Lives would not take place this summer in an article for the Mason County Press.  This was not well received by many in the comments, as has most declarations of cancellations prior:

All of the griping and moaning convinced him that an editorial was due for those who just couldn't figure things out.  He wanted to make a few things clear in his own pedantic way.  His point will be presented in full, a counterpoint will be presented immediately thereafter in response to his highlighted 'perspectives' and then a summation.

POINT:  Community events are not an entitlement.

I love summer and I love the many events that take place in our community. I have participated in many of these events in various functions: as an attendee, as a journalist and as a volunteer. Most of these events are funded through donations. They are planned by volunteers who begin planning the events months in advance. These volunteers organize these events because they love our community.  Naturally, when we read about the cancellation of one of these great events, due to a pandemic, we get upset. And, it’s OK to be upset. But, let’s keep some things in perspective:

A pandemic is defined as a disease prevalent over a whole country or the world. It is not isolated to Mason County.
Community events are not an entitlement.
Making the decisions to cancel these events are not easy decisions.

The people who organize these events care very deeply for our communities. I would dare say they care much more about our communities more than those of you who sit behind your computers and spew out negative comments on social media about “how dare ‘they’ cancel this event or that event.”
Speaking about that previous sentence, when our society returns back to “normal” I would like to challenge more people to step up and volunteer around our communities. At the minimum, take a moment to thank the many people who bring you those annual community events [END] COUNTERPOINT:  The above diagram was constructed in late February, before the World Health Organization (WHO) declared Covid-19 a pandemic so it could do more.  Covid-19 and influenza (flu) are both viruses with minor differences.  The differences noted at this time imply that Covid-19 was 20 times more deadly than the flu, and other things were unknown.

Since then multiple tests have shown that a significant portion of the population has antibodies for Covid-19, meaning that they have made contact with the virus and survived, often with few or no symptoms.  Recently, Israel announced that tests for Covid-19 antibodies indicate that 200,000 Israelis have the antibodies, yet only 290 have died, rounded to the nearest tenth of a percent, that's 0.1% which is the same fatality rate of the flu-- which has its own vaccine!  Antibody tests made in the US have shown similar rates, some even less.

Influenza season is effectively a pandemic every year, the above graph from a 2009 Wall Street Journal article notes that the CDC estimates that the flu is involved in 15 times more death than it is given credit for each year in the US.   Which means that in 1999, about 50,000 people died as a direct result from the flu, but another 700,000 had the flu and died from something else being diagnosed.  Being that those types of deaths would be labelled Covid-19 deaths this year due to the new protocols, we see why the deaths totalling over 100,000 could be nothing more than a reclassification statistic for a new seasonal strain of flu.

[EDITOR's NOTE, 6-10-20:  on review of this chart, the CDC estimated 50,000 deaths in 1999, there were only around 3000 reported deaths, this weakens the argument used in the previous paragraph.  What follows is an alternative way of observing the anomaly of 100,000 Covid-19 deaths].  If 5-20% of people in the US get the flu each year, then one should expect those that survive should have antibodies in their system.  Roughly 700,000 people die in the US every three months of all causes, if we count the 5-20% that have that year's flu antibodies in their system as flu deaths (even if that's not the cause),  then 35,000 to 140,000 deaths will be from the flu since post-mortem tests would be positive.

So why are we cancelling summer events held outside and outside-the-flu-season while using pandemic hysteria as a rationale?  It's not difficult to see that downtown Scottville and Ludington are in crisis because their freedom of whether to stay open or close their doors were taken from them in early March by a governor willing to shut them down as non-essential parts of our community.

Precautions are fine when you don't know how bad a new virus is going to be, but Governor Whitmer used a model where 70% of Michiganders would contract the virus, and the death rate would be twenty times what it has turned out to be.  These are unfathomable numbers to most epidemiologists  looking at the available data at that time.  Even when more data started pouring in, she kept Main Street closed in Scottville, it's now coming up on three months.

Scottville Commissioner Rob Alway not only permitted the oppressive hand of the governor to clench the commercial throat of Scottville, he condoned Scottville police chief's closing of an essential service being provided by Five Cap Inc. for a specious reason of having non-essential work being performed in providing food and services for the area's needy.

Reporter Rob Alway never pondered why it was safer for just a few stores like Wal-Mart to remain open under reduced hours, and thus be more densely packed, while all of his Main Street for three months was forced by the government to remain shut under penalty of fine and arrest-- when they could have remained open and operated safely, even if Covid-19 had turned out to be more virulent and deadly than the flu.  This includes the Fivecap building on North Main that he passes everytime he goes downtown from his house, the one business his local government made an example of with a special 'community event' of closure.

Community events can bring communities together, but few would mind missing them if there was good cause; only an out-of-touch politician would equate these with being entitlements when Scottville's government has been actively complicit in choking the life out of its people's ability to earn a living with their businesses and jobs.

Freedom is an entitlement that you have helped take away from your community, Commissioner Alway, remaining silent on tyranny from above while perpetuating the myths of an overblown flu pandemic to keep Scottville merchants gasping for breath under your knee.  How dare you!

Woodsman, Rob's philosophy is that if he has a choice to defend his position honestly or delete a comment, he'd choose the latter.  As a government official, a city commissioner no less, his disdain for people's free expression is very troubling (it already was as a 'journalist').  This latest example of 'how dare you think that way' shows a troubling bit of elitism.

Permalink Reply by stump on June 14, 2020 at 11:08pm
You know we just have to think a little different now. If we call these summer events PROTEST thousands of people can come , there could also be food and other activities. No problem with Protesting apparently for large crowds. Some criminal passes away? BIG PARTY, multiple cities, the whole nation, hell, world wide , thousands show up with no criticism.Just have to think differently.Can we protest no 4th of july fireworks? The proposed parade route?