Why do the police go against their training and community standards in harassing good people and turning them into criminals when those people are only innocently exercising their rights as an American?

Two instances of this were noted today, one happening recently, the other only coming to our attention now because of the falsely arrested victim of brutality coming forward with a lawsuit.

Jonathan Jones was out near the street carrying a handgun in a holster on his side when police drove by and saw the bulge. The gun was partially covered by his shirt. He was handcuffed, arrested and taken to jail.  According to officers, Michigan is an open carry state, but the gun has to be completely visible; they further note that they have no discretion in the matter.   They have to make the arrest and the case can be mitigated by the prosecutor’s office. The prosecutor has issued a felony gun charge. 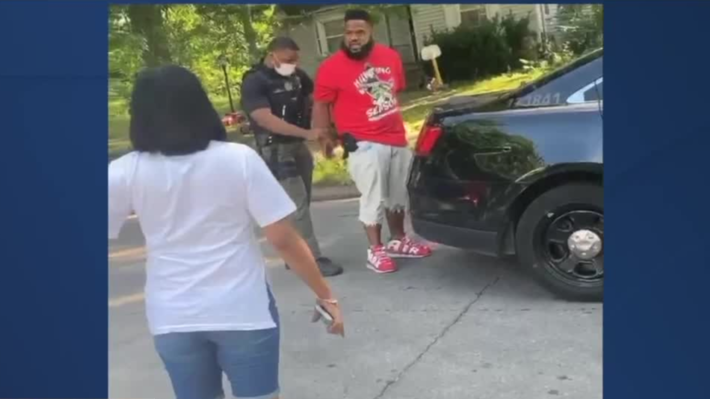 The police actually have plenty of discretion in these cases as to whether the gun was concealed, whether there was any intent to conceal it, and whether arrest was warranted.  Mr. Jones' fiancé pondered: if police saw in passing enough of the bulge to determine that it was a holstered gun, then how could it be concealed.

Surprisingly enough, the case law in Michigan that is most widely cited regarding concealment was PEOPLE v. JOHNNIE W. JONES  12 Mich. App. 293 (1968).  Over a half century ago, a man with the same name was convicted and sentenced on a charge of carrying a pistol concealed on his person without a license in Flint.  The appeals court reasoned that "a weapon is concealed when it is not discernible by the ordinary observation of persons coming in contact with the person carrying it, casually observing him, as people do in the ordinary and usual associations of life." 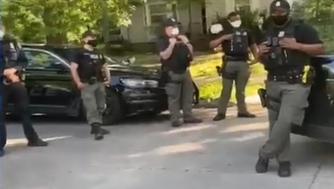 Police casually observing him as they went by, saw enough to determine that the 'bulge' was not a cell phone, pager, or other harmless device one finds attached to a belt to form a 'reasonable suspicion' that a gun was half-hid, which would allow them to stop and search Jones.

Yet in getting to the point of reasonable suspicion, the police must have seen enough to give them more than a hunch that it was a gun-- thus one could easily make the case that concealment in the legal sense was not attained here.  It's incredible the amount of additional police (see some of them in the picture) that showed up just to arrest somebody abiding by the law (the gun was purchased by and registered to Jones and in a holster on the outside of his belt) and arrested for a bogus charge that should be dismissed.

The police showed WXYZ the bodycam videos of the officers involved but couldn't air them because the police decided to make them exempt from disclosure as part of an investigation.  When the police do this, the videos inevitably turn out later to be evidence against the police doing their job properly and professionally.  It's a certainty.

The needless escalation in this case by police and the prosecutor could easily be viewed as racially profiling and racially intimidating, since they are being disingenuous about their discretion and the law.  But turning innocent men into potential felons happens to white folks too.  Consider this Colorado incident where a good Samaritan gets assaulted, arrested and charged with crimes by a cop who somehow believes that he has the power to make anybody answer his questions.

Preston Sowl is suing the Loveland Police Department after he says officers forcefully and wrongfully arrested him when he refused to answer questions as a witness about a motorcycle crash last fall.

Pardon about the rough language and commentary in this video of what happened:

He and his wife were leaving Charlie L's pub that afternoon when they saw a motorcyclist laying under a fallen motorcycle. The crash was blocking the parking lot exit. Sowl and other bystanders went to help the motorcyclist, and another bystander lifted the bike off the man, who was bleeding and visibly injured.

The encounter quickly escalated after Sowl demurred from answering any questions, with Loveland Police Officer Paul Ashe telling Sowl that he had to talk to him, then threatening to arrest him for obstruction. Sowl repeatedly refused, which was within his constitutional rights.

Ashe and other officers then arrested Sowl, twisting his arms behind his back to cuff him after he wouldn't put his hands behind his back. The footage shows Sowl yelling and cursing in protest during a struggle, and the camera's view is obscured for about 20 seconds. When the visual footage returns, Sowl is face down on the ground with his hands cuffed behind his back. As officers lift him from the ground, he yells in pain.

According to Sowl's lawsuit, his shoulder was dislocated during the arrest, and he suffered bleeding cuts on his head, knees, legs, arms and wrist. He also re-tore the rotator cuff he'd recently had repaired through surgery. He later had his shoulder replaced, which Schielke said was a result of injuries from the arrest.  The unabridged body cam video is below

Like the first incident, this wasn't just the failure of one cop to do what he should be trained to do.  There were at least 8 other cops around the Jones incident, here there are at least three officers arresting the good Samaritan for obstruction, just because he knew the law protected his right to remain silent as a witness (after the fact) and even as a suspect, had he been one.

One could easily dismiss one officer's gross misinterpretation of a person's rights as due to being poorly trained, but when there are a whole squad of officers and other emergency workers watching what goes on and allowing injustice and violence to happen to wholly innocent individuals who they are supposed to be protecting and serving, there is something definitely wrong with their training and their mindset.  If police don't want to be defunded, they will need to learn better how to de-escalate situations and not make innocents into victims of their own incompetence.

As long as you have police unions that protect the bullies on the force this will be a problem as all public sector unions are designed to protect the lowest common denominator, whether that be an incompetent or a sadist.

A police chief is powerless in this situation. What can they do? Write him up? The offenders pay is predicated on the contract and any withholding of salary is only a temporary situation. They are also protected by blanket insurance policies that further enable them proceed without fear of retribution.

How to correct this?

A good first step is to ban all public sector unions but I see political will to do this, until the time that changes we will all be at the union's mercy.

Good tie-in to what we've discussed before.  Police unions and other public service unions are part of the swamp we hear about, however:  Republicans generally like police, dislike unions and Democrats dislike police and like unions.  Result is a political stalemate within parties, and so nothing gets done politically.

Permalink Reply by Freedom Seeker on July 3, 2020 at 5:46pm
Good discussions X and shinblind. Sounds a little hopeless, but, maybe if the movement takes notice nationwide, there will be more pressure on the unions in union states. And another option is individual lawsuits for excessive force which can at least slow down municipalities.

These kinds of arrests do nothing to help the cause that the police are just doing their jobs. If this is how they were trained then the public has a lot to worry about. In each case a nothing situation was turned into something by a complete over reaction by the officers. This is why there is unreasonable legislation that is being proposed that will further restrict the police. Every officer needs to be licensed and take a test annually to show they have knowledge of the law. Along with that requirement each officer needs to be certified that they are mentally stable to continue in law enforcement.

As a former teacher, I am NOT a fan of unions. I was forced to pay dues to an organization that did not represent me or the students for that matter. Just the political will of the Democrat candidates. I suspect the Police and Fire Unions fall prey to the same kind of power grab.

I would rather see better training for police instead of constant bashing hurled their way.

Imagine having to do their job everyday?!

Basically, they are dealing with the bottom feeders of society , go to their shift everyday wondering if they will die, and getting cursed and spit at... and even worse. It is like going to war these days. They def should be screened often for PTSD type reactionary behavior, but deserve our respect. Does anyone really want the alternative of having fewer police and less protection? Not this Lady...

Trying to hold police accountable for their actions and the actions of their fellow police officers is not bashing police, it's one of the checks and balances that thoughtful citizens have.  People may conflate my many years of police criticisms with those of BLM and other organizations that have risen in the wake of George Floyd's incident, but these have shown themselves to be radical groups whose best solutions are either to defund the police or adopt a bunch of 'progressive' ideas that improve nothing.

In both instances provided here, the responding officer(s) created two criminals without any underlying crimes being committed.  They assaulted an old man for being a good Samaritan, not respecting his rights to NOT talk with police in such situations.  Multiple cops, fire/rescue people saw that and did nothing to stop the bad cop from assaulting the man, they are part of the problem, just like those 8 or so back-up reserves in the first case who never suggested that they let the law-abiding man with a lawful gun go with just a warning, instead of feeding the media the BS that they must charge the man with a felony.

This is why the 'few bad apples' theory is suspect.  There are too many incidents when the cop fraternity fails the public in their duties; those must be addressed with meaningful reform, not leftist solutions that only make things worse.