Four days after Halloween, a dead person from Ludington and who would be 119 years old, came back to life and voted in Mason County. 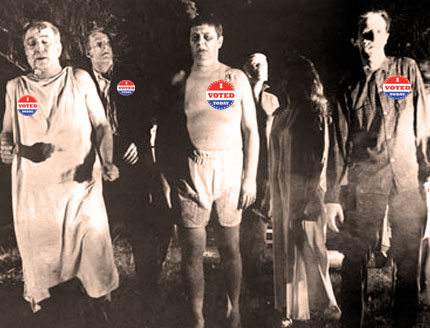 Technically, Donna Brydges is still resting in peace, but some surrogate for her, through the magic of unsolicited mail-in ballots and willful fraud on their part, voted on her behalf.  According to the Michigan Secretary of State Jocelyn Benson's website, this surrogate sent in a ballot application on July 29, was sent a ballot by the local clerk on September 24th and sent a filled and signed ballot back on September 30th.

Donna is not alone in her ghost-vote, June Aiken from Jackson County who would be well into her 120th year (a dodecagenarian), sent her ballot in on October 8th, after receiving her ballot a month before.  William Bradley, 118 years young and dead since the last millenium, allegedly sent in a ballot application on September 11th, received a ballot eight days later, and sent it back on October 2nd.  No man in history has lived longer than 116 years.

How are these dead people born over 115 years ago able to vote throughout Michigan?  The table was set earlier this year when the aforementioned SOS Benson sent out ballot applications to everybody on Michigan's voter's rolls, while these rolls were filled with not only of people that had moved or never existed, but also composed of many people that were mostly or fully decomposed.  This only encouraged the widespread voter fraud that was perpetrated on the lawful voters of Michigan who were disenfranchised on Tuesday and beyond by the cheaters working for the political party that Benson, the attorney general and the governor swear allegiance to.

It should be noted that when George Washington ran for President in the eighteenth century, his acclaim was so high that he ran unopposed both times after declaring his candidacy.  He would have likely had a hard time forecasting the division of America that led to the Civil War and to our current cultural war.

Being a fan of statistics and probability, I can't fathom other people with similar knowledge not coming to a conclusion that fraud was perpetrated in states with lax voting procedures allowing partisan officials to manufacture enough votes to allow their candidate, Joe Biden, to win.  Mounting evidence continues to come into being against election integrity in the battleground states where Democrats were in charge of the election process.  America is done for if we fail to get to the bottom of the cheating performed that appears to have stolen and invalidated the November 3rd, 2020 election, and then fail to remedy that situation with a lawful and orderly process.

The Presidency was won by the Medias pick. Watching the political TV shows this morning , their still at it giving the Democrat guest their say while interrupting and  challenging  the Republicans  view .  My son stated the other day he watched a Fox news broadcast , must have been the first time for him as he stated all the lies that were told . No, that's what you get when you watch CNN.    I just want to know where my remaining $8800. stimulus check is. Three trillion dollars divided by 300,000,000. people = $10,000.  each.  I guess I just have to chalk it up to Democrat pork for non covid operating cost.