Mens Rea in the Mens Room?: Mystery of the Schoolhouse Stalls

Last night an anonymous guest at the Ludington Cares Facebook announced that shook up the local parents and students by its implications:  some student at LHS had made some kind of threat at school  and it didn't appear to be handled properly-- from the viewpoint of the anonymous poster: 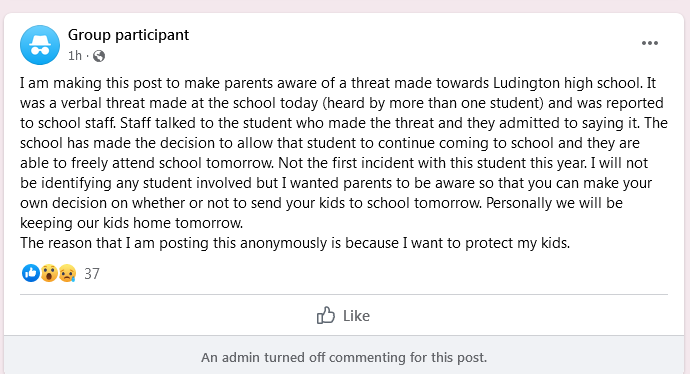 Many parents and students had a right to be worried, as this same day a tragic shooting in Texas had taken the lives of 19 Fourth Graders and two adults.  Unsure whether this may be some concocted hoax, gospel truth, or somewhere in between, I immediately took to my emails and did a public records request to the district, looking to see all public records associated with this incident and subsequent investigation.

Before I received my response late this afternoon from a very responsive superintendent, Kyle Corlett had already crafted a letter briefly explaining the incident and the school's perception at this point in their investigation.  It went like this:

Yesterday, an alarming statement was overheard in the boys bathroom. This was brought to the attention of administration who identified the student and began an investigation. Law enforcement was contacted immediately. The student’s parents were contacted and, out of an abundance of caution, were asked to keep the student home until the investigation was completed. At this time, we would not consider the statements a credible threat.

Unfortunately, LASD and schools across the country are receiving reported threats periodically. We appreciate all students and staff who say something when they see something. However, each one of these reported threats are not shared with parents and community when they are not identified as being credible. Each time, law enforcement is contacted and a thorough investigation and threat assessment are conducted and students are kept home until it is completed.

The tragic events of a school shooting in Texas and the devastating events at Oxford, Michigan earlier this year has everyone, including us, on heightened alert. Our thoughts and prayers go out to those families affected. We treat every reported threat seriously to ensure that our students are safe.

The moderate tone was comforting, and Superintendent Corlett quelled a little bit of the false information that was anonymously put out concerning a supposed apathetic school response.  The response I received illustrated the school's investigation was much more than apathetic.  It read very much like one of those logic puzzles, and indeed, it presented a logic puzzle in itself over what really may have happened in the high school bathroom earlier that day that has resulted in a temporary suspension of the student alleged to have made a cryptic threat. 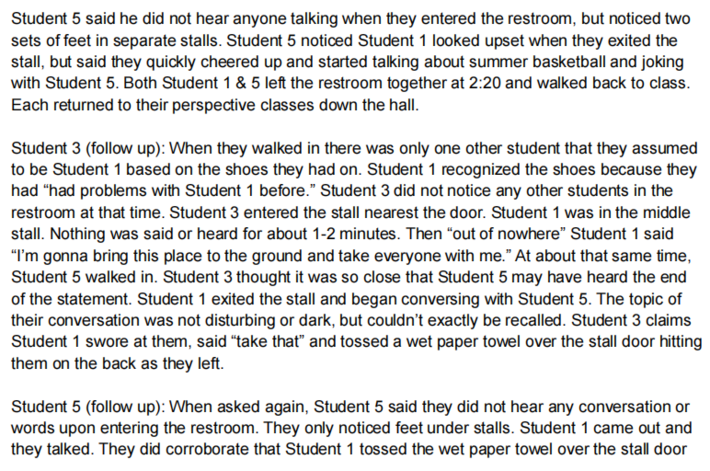 If we presume that the investigators have reported everything accurately and apparently confirmed them with cameras that caught the entrance and exit of that rest room in the relevant times, it appears that someone is not telling the full truth.  I have a hard time just looking at it one-dimensionally, so let's look at this in two dimensions by plotting students versus time and doing it as a bar graph that shows the times that each student was in the bathroom.  Additionally, let's adopt the added assertion from Student 3 that the troubling statement was made at about the same time Student 5 entered the restroom and put that as a dark red line: 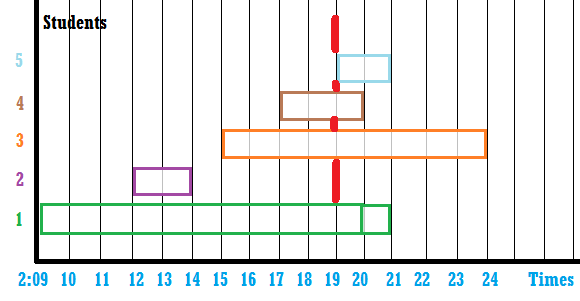 The unfortunate thing is that we don't have the exact times in seconds that each entered and left, I have therefore maximized times that each student would have been in the restroom (i.e. Student 2 comes in at the beginning of 2:12 and leaves at the end of 2:13) but it seems apparent from the investigation that Student 4 should have heard the statement.  But not necessarily if times are minimized (i.e. Student 2 enters near the end of 2:12 and leaves at the start of 2:13), we see a gap where Student 1 and Student 3 would be the only ones in the restroom: 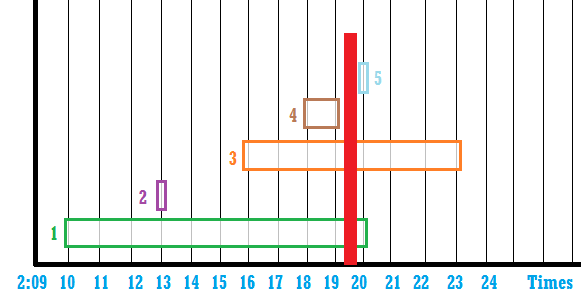 It's clear that whoever investigated this crime and made the document should have reported exact times by the second, they had that information from the cameras; it makes a big difference in determining what happened and when it happened.

One of the things that comes out of the investigation is that Student 3, the only one who heard the vague threat admittedly had "problems" with Student 1 and would have likely been upset with Student 1 for throwing a wet paper towel over the stall onto him that afternoon-- a fact he decided to leave off in his first interview (and one Student 3 never admitted to).  One wonders why Student 3 decided not to point out the bullying type of behavior when he reported the threat, which sounds as if it could have been a line from a movie or video game.

With this additional information, I hope students and parents are able to make a better threat assessment of their own for what happened here, even though it seems that either Student 1 or 3, or both, are not telling the whole truth.

My first though was who was the 1st student talking to ?  Himself or someone on his cell phone ? Did anyone think to check his phone for a recent call ?  Apparently this kid needs some help as many of these threats come to light and nothing is done until the threat is carried out.  I would say the investigation is not over with.

I understand that there is a fear of a student going off the deep end but that is no excuse for denying a student their rights because of an alleged comment which may or may not have been said. How can a resolution to this situation be reached if we have to guess which student is telling the truth? Having said that, I have a real problem with the "Investigation of comments" report and it's overuse of the term "they".  Since the word "they" can be used as plural or singular it would seem to me that it's overuse in the report only adds to the confusion and does nothing to clarify who said what or who did what. Who ever put this report together needs to take a class on communications. It's almost as if the person who wrote this report was trying to be politically correct and doing their best to make a gender neutral  document. It would have been far more helpful if a particular student in the report had been  referred to as "he" instead of "they". Read the report and substitute "he" for "they" when referring to a singular person. The report seems to make more sense and is easier to read.

X, your graphs are very helpful in understanding the time line

It's a very good second point you raise, there is some confusion as to who is referenced with each "they' used, but most seem to be used for the singular student, where "he" would be a better choice-- we're dealing with a washroom that only has males using it.  Stump properly indicates that the investigation seems to be incomplete.

The other point you mention, that the rights of the student should be considered in such instances is also well taken.  One of the reasons zero-tolerance policies fail in regards to school threats situations is that it was so easy to get even with a fellow student by raising a fictitious allegation against them that could neither be proved or disproved.  Schools and police are reluctant, however, to punish proven fake accusers because of their perception that it may suppress other students making genuine accusations coming forward.

Also glad to add visual aids to help with understanding, I did it originally for myself and felt it might help others understand the facts visually.