Earlier this Independence Day evening, I was out patrolling the local beach at Stearns Park and heard somebody playing their music awfully loud.  As I travelled north, it got a bit louder and it was clearly someone who was tuned to the local radio station WMOM.  In the distance, I saw a pair of elevated amplifying speakers belting out tunes just beyond one of the park's rules signs, you know the ones that says no loud music is allowed. I remembered looking at a May 12 Parks Committee set of minutes that effectively had the committee turn down WMOM from broadcasting from Stearns Park.  Councilor Winczewski said she found only 3% of the people she talked with were OK with WMOM doing this, with her and Committee Chairman Rozelle not seconding Councilor Cain's approval.  The motion died.

The issue came up once again at the next council meeting on May 24.  Those minutes reflect that Stibitz said that the committee did not receive enough support to WMOM's proposal to move it up to the council for approval.  Neither of the two June meetings of the city council touched upon this issue; it appeared that WMOM's request to broadcast live from the beach had failed to get city approval, which can only come from the city council.  On April 21 in committee the original proposal was laid out, which looked an awful lot like it did earlier this evening.

The city has not approved this park use, it has not come up to the full council and effectively died in committee, but somehow it was revived outside of the process.  There are two possibilities.

For one, the city manager can grant a special written permit as the park director for WMOM to broadcast and amplify their music.  Under the park noise ordinance (section 38-76), this seems to be an unlikely path, since City Manager Foster admitted this was effectively dead if it wasn't voted up by council.

The other possibility is that WMOM decided that they would declare their own independence from a city council that wouldn't consider their 'reasonable' request, and rebelliously hoisted up their speakers and blasted the beach area with amplified music.  Sure, that's unlikely too; more likely is that both WMOM and the city manager went around the wishes of the elected city councilors who have the ultimate say in how Stearns Park beach operates.

Permalink Reply by Logik roberts on July 5, 2021 at 1:01am
I’m gonna be complaining about this! Wmom is fake news first of all and secondly it isn’t above the law!!

This has come up on Facebook in our sister group, the Ludington Pitchfork, and the Concerned Locals of Ludington page.  According to WMOM, they piggybacked on the Jaycee's beach firework permit, which was passed in that May 24th meeting linked to above.  Nothing in the permit says anything about them having a third party come in and blast out amplified music at Stearns beach, which is inherently against the law without a valid permit.

Five years ago, I was prevented from hosting a food give-away event at Stearn's Park on September 29, because City Manager John Shay and the Ludington City Council stonewalled my request for over a month, it would have went even longer except that it was too late at that point to plan a costly event that could be cancelled by Shay on a whim, as he threatened.  It looks as if WMOM was invited by the Jaycees to set up at the beach late last week, when nothing in their permit gave them that ability.

I got a response back from the city manager today saying:

"After reviewing emails, there is not any documentation regarding the permission for WMOM to broadcast at the beach. I had given the Jaycees group the permission (after consultation with Chief Kozal and Superintendent Stickney) to play music at the beach prior to the fireworks and during via a phone call as they were offered the system from a community member. As I did not find their request unreasonable, I gave the permission for the music playing (including themed during the fireworks show) until the fireworks show completed. It is only afterwards that we learned that WMOM was the company that supplied the music itself, not the equipment and some of the concerns associated with the music that was played prior to the show."

This varied somewhat from what Aaron Thiel of the Jaycees said and what the DJ of WMOM were saying.  Shortly after posting what the city manager reported on Concerned Locals of Ludington on Facebook, WMOM retaliated-- not by explaining why they erroneously reported their version of facts or explaining why Mr. Foster was wrong, but by silencing me on their own Facebook page and remaining mum on CLL.

I'm going to have to approach Logik Roberts' campsite and report that WMOM is not a reliable reporter of facts.  They are fake news. 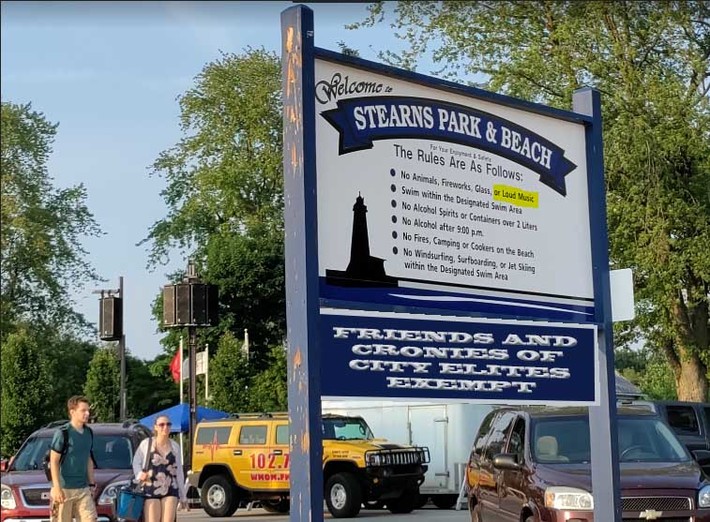