At the December 20th meeting of the Ludington City Council, councilors voted unanimously (without any meaningful discussion) to spend $260,000 to fix the finger pier to the north of the Loomis Boat Launch.  The walkway on this pier had been severely undermined over the last few years, featuring high water and stormy seas, with the last segment of it sinking into the harbor a couple of years ago. 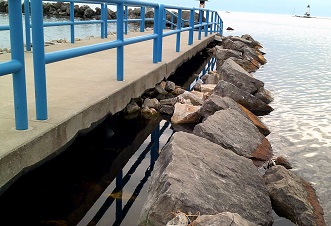 Over twelve years ago, Ludington's city leaders, few of which still serve today, had an idea to save some money by making a solid breakwater parallel to the Loomis Boat Launch and a few hundred feet offshore in order to stave off dredging that area every year.  Because 3/4 of the project would be paid by the state, they figured it would effectively pay for itself in just a couple of years by dint of the savings in dredging costs.  They had also sought a state grant for that now-damaged finger pier, presuming that it would be protected by the breakwater and the generally quiet harbor it was in.  One councilor at the time was reluctant to buy into the projects, stating budget issues and sizes of stones: 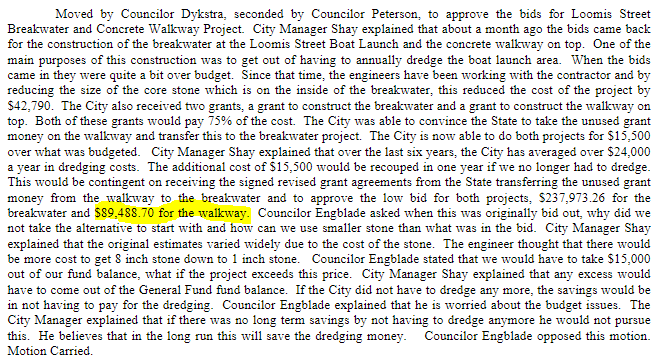 As you can see, the walkway project cost just under $90,000 in 2009 dollars; if one factors in the inflation rate since that time (29.6%), one finds that such a project would cost about $116,000 this year.  Yet, we see that just making repairs on that walkway will cost quite a bit more than twice that.  One wonders exactly what they are doing to repair the walkway as it is not clearly explained in the meeting's agenda packet, nor in the Public Safety Committee meeting's notes where it was discussed.  It was briefly explained at the 12-20-21 meeting, however:

The 2022 construction will effectively remove the last 20 yard section of walkway, replace it with armor stone, and reinforce the armor stone already existing along the structure to hopefully prevent future erosion and undermining.  One wonders why the City of Ludington would have so much confidence in the engineering team (Prein & Neuhof) which engineered this disaster in the first place, rewarding them not only with new fees for their services, but entrusting them to do all the work in seeking competitive bids and only finding one bidder.  All for repairing a finger pier that could be built anew for less than half the cost of the repair.  The state's not paying 3/4 of it this time either, the local taxpayers are being given the bill.

This time no councilor asked any of the uncomfortable questions, perhaps because they have gotten so used to spending money on optional projects on the shoreline that only serve to draw more money for maintenance than for what they are worth.  I would say look at the $600K West End Project, around for three summers mostly unused and ignored by our visitors and citizens alike, but you'd need some heavy equipment to clear the sand off so you could take a look at it.

I think you hit it on the head. This thing was not properly engineered. Anyone with common sense should consider ice build up and damage when constructing anything in the water. Your photo reveals that. The situation with the small rocks was right on the money and as far as I'm concerned if this had been built as an ordinary breakwaterl this never would have happened. This entire problem happened because the boneheads running the City at that time wanted a sidewalk installed and because of that a normal breakwaterl was not erected. A huge waste of money, AGAIN! Just like everything the city progressives have been involved with the last 15 years or so. Below is a picture of the walkway I took on 2-16-2019. It shows the end of the sidewalk to still be standing so it stands to reason that the collapse took place after the ice melted. How could any engineering company miscalculate the power and weight of ice build up. So, back in 2009 to 2021 we saved about $180K in dredging. Now we have to spend over $340K to just try and fix this absurd $350k excuse for a walkway and top walk? Plus, Prein & Neuhof's further faulty engineering costs of ($100K +??). There seems to be no end to the continued wastes in thinking and engineering these past few decades in COL city councils.

Sorry for my delayed response, I've been busy with some projects lately and either the computer or the Ning software is acting up, such that I can't write up articles without it likely crashing when I add a link or photo, which increases not only the time to write up these, but my frustration level too.

I think you probably have the engineering costs over what it would be, it's usually less than 20% of bigger projects like these.  I am no engineer by trade or line of study, but I had noticed degradation of the base of this walkway over the years, even before the high-water level years, and wondered why it wasn't built to last.  Now we can build back better.

Maybe the council should use the rocks in their heads to shore up the walkway. It never ends , it's easy to spend someone else's money.

What shouldn't be lost in the discussion is that the functional part of the two structures is the breakwater, the finger pier walkway was a structure without a function other than serving as a shorter pier to walk on than the lighthouse pier or the other finger pier west of the coast guard station.  I'm no engineer, but those other piers on both sides of the harbor containing the Loomis pier render that construction as useless as Joe Biden.  The Loomis pier walkway does nothing to prevent the need for dredging, the breakwater itself is sufficient for that.

Effectively, Ludington taxpayers are spending $260K to patch up a structure so it is no longer a major liability issue for the City or the City's engineers, the latter making sure the cost is sufficiently high, no doubt, because they didn't supply the City with a transparent bidding process. 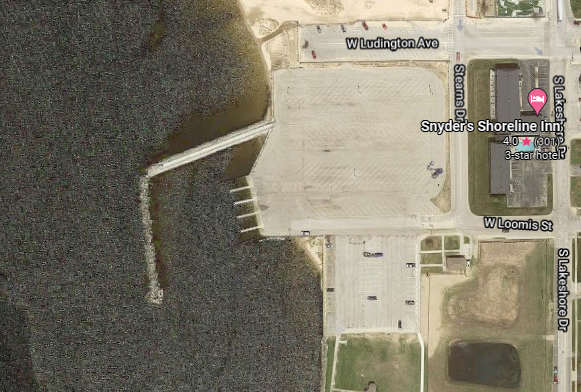 Another thing to remember is, they built this walkway/pier to fish on. The rocks on each side alone prevented that because they are hugely wide, accumulated moss, and are far to cast across, also are slippery and dangerous. Besides that, the COL did NOT want walkers or fishermen to go on that other breakwall outside this walkway to fish on, or walk on, and it was being done everyday in the summer anyhow. It is and always will be a HUGE LIABILITY for the COL regarding injuries, possible deaths, and huge lawsuits. So, why fix it at all? Simply stated, demolish it now.

Good points Aquaman and X. Also my understanding is that the stones removed from another wasteful project, the City Marina transient dockage, were used to build the wasteful project sidewalk breakwater and that is where the original idea for the walkway came from. "Let's see, what do we do with those damned stones? I know let's waste more money and put them in the harbor as a phony breakwater, then add a sidewalk for the tourist, That will give us a good excuse to waste more tax dollars." That's an additional good point, Willy, and it begs the question of whether the cost-cutting move to recycle the rocks was made at the cost of reducing the structural integrity of the walkway pier project.  One may surmise that when the rocks were originally put into the marina, they did not use 'armor stone' because the marina is protected from wave action from the big lake, unlike the walkway pier.

I would love to have a qualified marine engineer without any conflict of interest in the matter to weigh in on this topic.