Poor Accommodations at the Local Courthouse

Two years ago, I and my co-plaintiff argued about the lack of handicapped infrastructure at Copeyon Park as an incidental issue to our main point of the City of Ludington failing to follow the Open Meetings Act in the process of approving a splash pad at that park.  We ultimately lost this point of Americans with Disabilities Act (ADA)-compliance due to the concept of ripeness and standing, but Judge Peter Wadel indicated this very well could be revisited again if the City doesn't cure the several ADA problems they have at Copeyon in the near future (and they haven't).

Ironically, the City is now going to the courthouse in order to enforce better compliance with the ADA.  This time there is no lawsuit involved, it's just the LPD Chief Tim Kozal developing a traffic control order (TCO) that will likely be approved this coming Monday (April 26th) at the Ludington City Council Meeting.  The TCO (on p. 55) will establish one handicapped parking space in the parking lots to the east and west of the county courthouse; the records indicate that no TCO has ever been established for those two street-side parking lots. 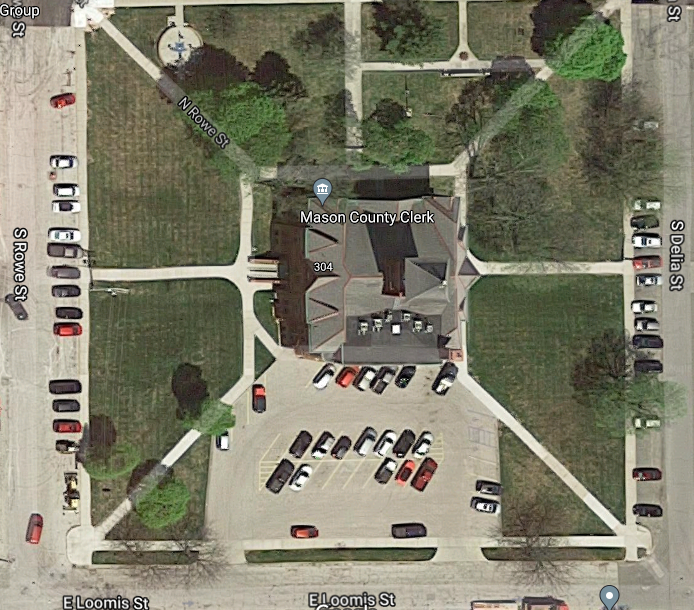 It's easier to see why Judge Wadel did not take the ADA issue too seriously when one looks at all of the ways that the courthouse does not currently comply with the ADA and that Chief Kozal's solution does not come close to correcting the issues making it tough for the disabled at the courthouse. 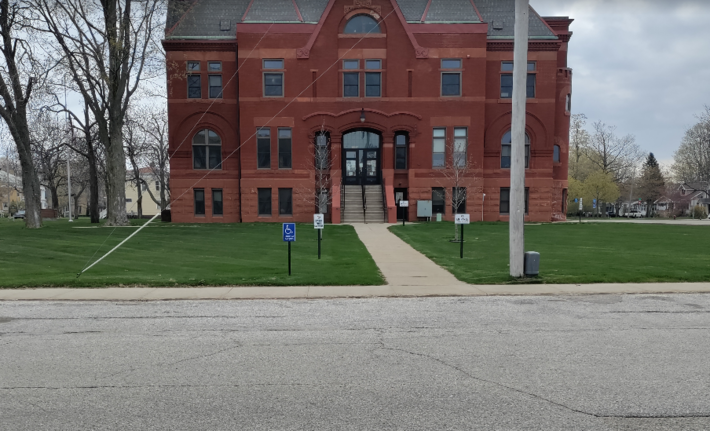 As you can see, the west side of the courthouse has no pavement marking for handicapped or regular parking.  It does have a low-profile sign, this extends for the full length of the block: 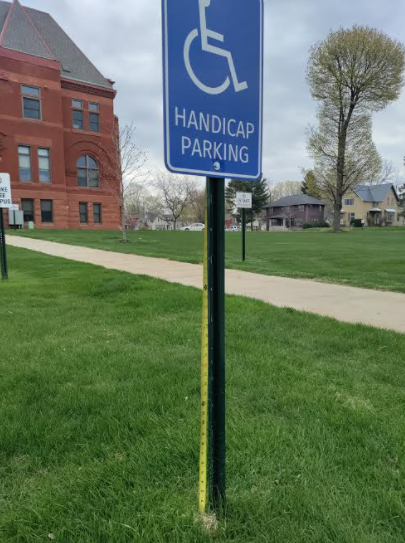 When one looks at the federal and state rules for handicap spaces in parking lots, one sees a lot of rules being violated here.

All accessible parking spaces should be painted with hatch marks or similar signage to prevent accidentally parking into them. When mounting signs on a parking lot, the lowest edge of the sign must be at least 5 feet above the ground to maintain optimal visibility for drivers and pedestrians, not less than 3 feet as they have it now.

Additionally, the two parking lots are approximately 330 feet wide, if parking spaces were made with the standard eight foot width, 41 regular parking spaces would be on both the east and west parking lot of the courthouse.  If a parking lot has between 26-50 spaces, there has to be 2 handicap parking spaces, with at least one van-accessible space.

The solution posed by Chief Kozal offers one space on each side, without a van-accessible marker or the promise of any pavement paint to assure vans aren't blocked out.  We note that the situation is exactly the same on the east side of the courthouse in this picture, with no striping, another 3 ft. high sign that does not offer van-accessibility, and only one space when two are needed. Since this side is the only way to get into the courthouse during the pandemic, one could suggest that two more temporary van-accessible handicapped spots could be created out of three regular spaces, like it is in the court's southern parking lot or at this other Ludington locale.

If court officials haven't figured out that the courthouse's parking is extremely non-compliant with the Americans with Disabilities Act for decades, how can we expect them, or the city police chief, to correct all those errors with a simple insufficient traffic control order?  The Ludington Torch will work with the City and the County in order to get them in abidance with the law.

Seems of you bring it, it goes nowhere until the next step brings it up...

Good call X. If I were in charge I would have the handicap spots as near as possible. The photo below shows the locations I would pick. Not only are they closer but those spots are flatter and they do not have an incline from the street to the Courthouse as the street locations have. Someone with a walker or wheelchair could have more difficulty going up those inclines.

The south lot is already in compliance and striped, with around 40 spots and with the far east portion having two handicap spaces (you can barely make them out in the overhead Google view).  Even though it is not marked on the entrance, many consider this lot to be reserved for county and court officials along with police, some of those prime spots are reserved for such officers.

The three courthouse lots are separated, so ADA rules would likely treat them separately-- not that it would make much difference, they would still need 5 or 6 spaces in total if they weren't, but they would likely be situated in this southern lot, where some reserved spots would be lost.

Thanks for that information X. As far as I'm concerned the handicapped taxpayers should be first on the list for accessible parking, so, the photo below shows where I would establish all handicap parking. 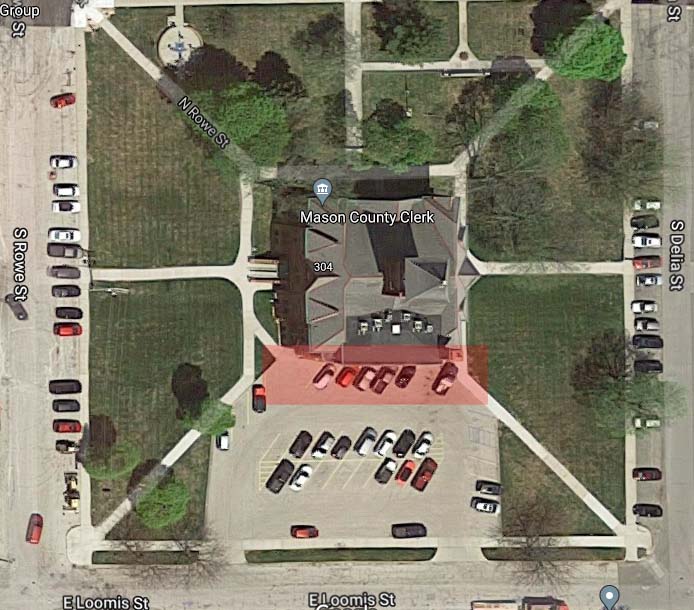 The whole parking lot off Loomis could be handy cap , I didn't even know it was there. I always park on either Rowe or Delia. Now figure out how to direct those people who need to the proper parking .

According to officials at last night's city council meeting (where the insufficient TCO was passed w/o amendment, naturally, even though I commented about those deficiencies), that south parking lot belongs to the county and the on-street parking is the City's responsibility.

Therefore, the county's lot is ADA compliant as it has two van-accessible parking spots.  Neither City lot is near ADA compliance now, nor will it be much closer following the traffic control order and the expected pavement striping.

Aren't the court house handicap parking ideas getting WAY too close to the drinking zone? It will be great sport to watch the people with walkers and motorized carts as they navigate the drunk bridesmaids in the street singing " Sweet Caroline" and skipping down the road grasping their 10 dollar beers. This will happen during the day in the summers for sure.

On a side note... could it be true that the city never looked into a drunk zone having to get permits to operate on a state road? Seems like they never do their due diligence and have to go in reverse to get the correct permits etc . The question is... Is this by design or is it incompetence?

Either way, the town manager is starting to appear to be in lock step with the Council and Mayor.

Your post brought funny images to my feeble brain LL. 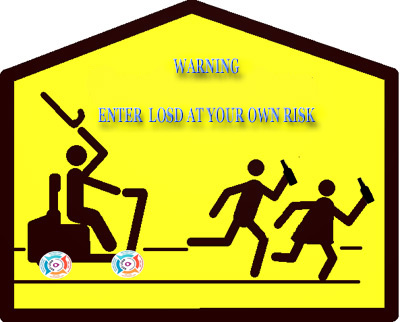 This sign is brilliant! Hilarious... you outdid yourself this time Willy.

Thanks LL. Sometimes the only thing to do is sit back and laugh at what's going on.