A small western Michigan school district has received a federal civil rights action lawsuit from one of their students alleging violations of the First and Fourteenth Amendments and other statutory laws.  Plainwell is a city about half of the size of Ludington in Allegan County, but the unconstitutional actions of four of their school district's employees has created a big problem, a problem that could rear its ugly head in any school district where administrators and teachers decide to work against the basic rights of their students in order to promote their own agenda. 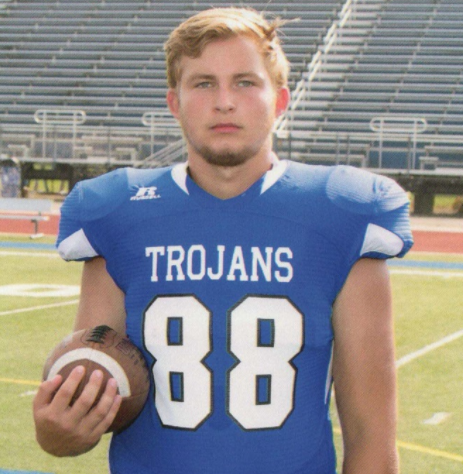 The Great Lakes Justice Center filed a complaint on January 27th in Federal Court in the Western District of Michigan on behalf of high school junior David Stout (pictured above).  Stout's attorneys note in his complaint that he was suspended for three days last fall for stating his Christian beliefs in a private text conversation and in a hallway at school. The school also punished him for not policing and reporting other student’s inappropriate jokes.

The Defendants’ (which includes the district, the high school principal and assistant principal, along with two band directors) further instructed David that he must stop posting his religious comments on all his social media platforms. David was also disciplined because of some offensive behavior by others, in which he did not participate and was not aware of, at a football game last October.

David is requesting a declaratory judgment that the Plainwell School District violated his rights as stated above, injunctive relief, reversal of the disciplinary action in his school record, damages, and attorney fees.

David’s father, David J. Stout, stated: “We have always taught our son to be respectful of everyone’s opinion and to be polite to others, as he was here. However, tolerance is a two-way street. David is entitled to properly express his faith and beliefs without being disciplined and suspended by Plainwell schools. We trust the court will uphold David’s constitutional rights and his school record will be cleared.”

The case arose when student David Stout was suspended for three days for expressing his Christian beliefs and opinions in private conversation with a like-minded person on school property and in private text messages outside of school with friends.

In his talks and text messages, Stout expounded the biblical teaching of God’s love through Christ for sinners and expressed his own love for his peers. He shared the Judeo-Christian doctrine that homosexual relationships are sinful and that God created only two biological sexes, male and female.

Before he was suspended, Stout claims he was asked by a band director why he “didn’t come forward” about sharing his religious and political beliefs with fellow students in front of school authorities.  He claims that the director told him that he should stop all religious conversations with other students because if they were overheard, they might feel offended and unsafe, and that he could not talk about religious or political beliefs for fear of hurting someone’s feelings.

When summoned by, confronted by, and diminished by the principals and his assistant of Plainwell High School, Jeremy Wright and Deb Beals, Stout made an assessment that it all was a one-sided method to shame, intimidate and silence conservatives and Christians on campus.  The two allegedly explained that Stout was responsible not only for stopping offensive comments and behavior, but also for preventing such behavior.

The two administrators warned him that anything he does or says at school, outside of school, or on social media could negatively impact his future job prospects — a statement Stout interpreted as a threat.  On October 25, 2021, Stout’s parents received notice that their son had been suspended for three days, in the midst of high school football season.

Stout asked the court to issue a declaratory ruling that the Plainwell School District violated his rights under the First and Fourteenth Amendments, as well as his civil rights under the Michigan Constitution and other state laws. He asks to have his suspension removed from his school record and seeks compensation and/or nominal damages, court costs and attorney fees.

This is a terrible violation of this student's rights. It is totally unacceptable for school authorities to use their position to intimidate any student. They should be fired. Separation of church and state does not mean students are not allowed to talk about their faith, that is not in the constitution.  As a matter of fact desperation of church does not appear in the constitution at all.

Secularism and atheism are religions onto themselves.  In situations like the one in Plainwell, it would be instructive for school administrators to figure out whether they would be disciplining the speech and religious ideas of an atheist or even a Muslim in the same way they are doing to the Christian in this instance.  If the complaint is factually accurate, school administrator/band directors overlooked the actions of others to focus on Dave Stout and scapegoat him for a violation of their own broke-woke moral system.

BTW, I like the 'desperation of church' phrase you used.

The Communists ruining the Plainwell school system should be fired immediately. Why do I refer to them as Communists? Because they are practicing and promoting the Communists ideology.

§ 89. Why religion and communism are incompatible

'Religion is the opium of the people,' said Karl Marx. It is the task of the Communist Party to make this truth comprehensible to the widest possible circles of the labouring masses. It is the task of the party to impress firmly upon the minds of the workers, even upon the most backward, that religion has been in the past and still is today one of the most powerful means at the disposal of the oppressors for the maintenance of inequality, exploitation, and slavish obedience on the part of the toilers.

Many weak-kneed communists reason as follows: 'Religion does not prevent my being a communist. I believe both in God and in communism. My faith in God does not hinder me from fighting for the cause of the proletarian revolution.'

This train of thought is radically false. Religion and communism are incompatible, both theoretically and practically.

Every communist must regard social phenomena (the relationships between human beings, revolutions, wars, etc.) as processes which occur in accordance with definite laws. The laws of social development have been fully established by scientific communism on the basis of the theory of historical materialism which we owe to our great teachers Karl Marx and Friedrich Engels. This theory explains that social development is not brought about by any kind of supernatural forces. Nay more. The same theory has demonstrated that the very idea of God and of supernatural powers arises at a definite stage in human history, and at another definite stage begins to disappear as a childish notion which finds no confirmation in practical life and in the struggle between man and nature. But it is profitable to the predatory class to maintain the ignorance of the people and to maintain the people's childish belief in miracles (the key to the riddle really lies in the exploiters' pockets), and this is why religious prejudices are so tenacious, and why they confuse the minds even of persons who are in other respects able.

" The school also punished him for not policing and not reporting other students inappropriate jokes"   That's a joke all in itself.  Is that in the schools student manual?  These people are the ones that should be suspended.

This is a very strange and shocking find X, and thanks for bringing it to our attention. I agree steadfastly with all four of the commenters so far, this is really pushing the boundaries of reason and the constitution to the max. on this young athlete that deserves no such treatment. He should be a winner in court, and those administrators should all be fired immediately. I hope his case is heard very soon, so he can go forward on a positive foot, and get his school record cleared of this nonsense.

I see the Story. was picked up on NEWS MAX today. From what I gathered he must have said something about the LGBTQ group either on his Facebook page or at school.