If anybody is still unconcerned with the direction that Scottville city government is heading during this decade, then please read on and please submit a defense on their behalf if you can make a reasonable case for city official behavior.  We will look at longstanding city policy, consider any shortcomings or defects in the existing policy, then look at the proposed changes to that policy and consider the problems and defects that arise should these changes be passed into law by the city commission. 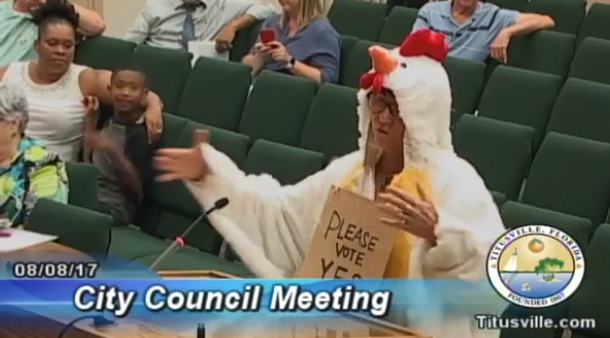 Citizens of Scottville have approached the city commission many time over the last three decades to get city hall's permission for raising chickens.  The legal authority that defines the process goes back at least as early as 1993, a process which hasn't been amended over those 28 years with tweaks or major changes.  It's fairly straightforward and open-ended as can be seen in the city code:

Domestic animals as defined in a prior section includes what one basically calls farm animals which would require a shelter, but excludes what one normally considers pets, like cats, dogs, hamsters, etc.  The process, as involves chickens, involves drawing up a plan that minimally requires fixing a place where you'd put the coop and chicken run, describing the distance it would be from nearby streets and neighbors, and fixing the number of chickens you plan on having.

One would submit this plan to the commission, informally you might just be able to give it to your favorite commissioner, and he could submit it to the city manager and full board for consideration at a meeting.  The city manager would look it over and make a recommendation, at which point the Scottville City Commission (SCC) would decide the issue based on whether the number of chickens and place was reasonable.

The process could take as little as 15 days (one SCC meeting, CM research and recommendation report, next SCC meeting) and offers great legitimacy since the city commission will have effectively endorsed it and the neighbors have an opportunity to publicly express their concerns or approval at either of the meetings.  The permit process is free, considered to be part of the daily city business that the city manager performs.

It sets very few restrictions which one might think would lead to people abusing the process over the years, but one can look at the number of people who have had their permits formally rescinded by the commission over the 28 years (none).  Back in 2010, the Patulski's were denied a permit from the city commission to raise up to 10 chickens at their Second Street house, primarily because the Planning Commission ruled against them.  One wonders why that outside agency was involved, other than even back then, the elected city commissioners were too chickenshit to say 'no' themselves.

Could the process be better?  Perhaps one could add minimum distances away from buildings and streets, perhaps one could add Planning Commission review to ensure these and other standards are kept and neighbors are aware of the plan.  Before we see what city leaders plan to do to the process, let's take note of the fact that the current process has worked and does not bankrupt the city or make it laden with chicken plagues.  I have walked through Scottville numerous times this year and I have yet to notice any chickens by sight, sound, or smell.  As already stated, the permits given out have not been rescinded at later dates.  The commission has yet to state a reason for the new ordinance or a problem that is fixed by it.  The ordinance, after first reading: 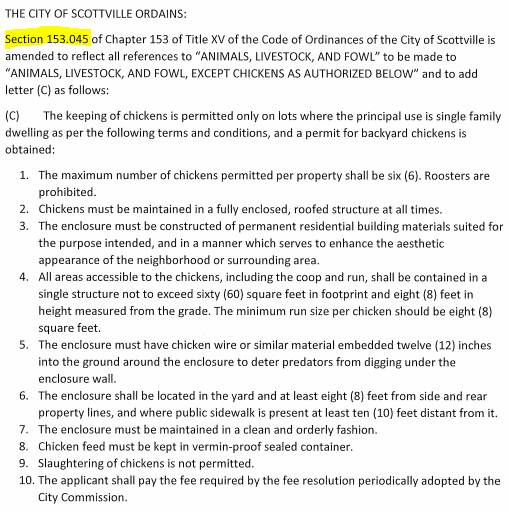 One should notice a fatal flaw right off when you see that it amends section 153.045 rather than section 91.16 already shown.  Chilean fee-chaser Carlos Alvarado has not figured out that chicken permits are not zoning issues; minimally, he is preparing the city code to have conflicting provisions.  Generally, a new ordinance will have a mechanism on it to rescind conflicting provisions, this has none, so if you try to get a permit using the established process you should be able to do so without seeing the Planning Commission who would be called to interpret a conflicting part of a zoning code against established policy.

Otherwise, let's go through the new ordinance line by line and compare it with what currently exists:

1) This sets an arbitrary upper limit on chickens of 6, the other allows discretion.  Truly, 6 chickens may be overmuch on small lots, whereas remote lots near the city limits may be able to hold more than six.  No improvement, discretion is better.

2) This measure seems very inhumane, your chickens have to be kept inside at all times in a fully enclosed, roofed structure; your kids will be breaking the law if they hold chicks in their hand, you will be if you permit your chickens to strut around your fenced in backyard.  Current law prohibits your chickens from running at large in the city.  No improvement, sadistic and unfeeling.

3) This is unnecessarily restrictive in that there are some very nice looking chicken coops made out of materials that aren't generally considered permanent residential building materials such as plastic, wire and plastic, PVC and wire, etc.  Likewise, it is rare that a coop will add to the aesthetic quality of a backyard, it would be better to say that the coop does not detract from that quality.  The city has not shown that the current coops being used are somehow defective in materials or aesthetics.  No improvement, limits responsible choices.

4) This offers more arbitrary restrictions without any basis from current chicken owners exploiting the current lack of coop dimension guidelines.  Current policy allows for variance among coops, the new policy would make a maximum sized coop for six chickens have 48 square feet footprint for a run and only 12 square feet for nesting/living.  That could be seriously crowded.   No improvement.

5) A chicken owner would be expected to protect his flock, so mandating burrowing predator protection seems a bit of government overreach when there are many other ways to protect chickens than burying flimsy chicken wire for predators that may not even be able to get to the coop in the first place due to other fences.  No improvement.

7-9) These provisions are covered in large part by state law and the health department, some explicitly in other sections of the city code.  Like many of the other sections, they should not be in an ordinance for chicken permitting, as they refer to conditions after the permit is granted.  No improvement.

10-11) This is the biggest indignity, as the city council plans on going from a totally free process to a totally fee process.  How does the commission justify a $35 or more fee to be paid yearly when they have been doing these one-time chicken permits for at least 28 years for free?  A nominal one-time fee may be appropriate, for this does have official review and a permit issued, but the yearly feature is uncalled for.  One also cannot decide whether existing permit owners would have to pay for this yearly shakedown scheme, because the ordinance is so poorly conceived.  Not even close to an improvement.

12) If section 12 wasn't clear enough, section 13 tells you your permit is not transferable.  One wonders if the coop adds to the aesthetic quality, why wouldn't a property buyer insist on the seller leaving it?  If the permit holder does a title transfer with a family member or a buyer that wants to keep the chickens and the coop, why can't the permit automatically transfer?  No improvement.

14) This section effectively takes the city commission out of the process unless the city manager denies a permit and the applicant wants to suffer more rejection.  This section actually is almost as bad as number 10.  For if your neighbor in Scottville is seeking to have chickens, you may never hear about it until that coop is erected about 10 feet from your house and you hear the clucking. Currently, two city commission meetings take place where the request is received and considered, covered by local media.  No improvement at all, other than for those who want to sneak in chickens.

In summary, the current chicken permitting process is free for those seeking to have chickens in Scottville.  The city commission receives your mapped out plan, they pass it to the city manager who decides whether or not to recommend it at the next meeting, the commission votes on your plan at their next meeting, where your neighbors can voice their approval or concerns.

The proposed chicken ordinance charges you a $35 or more fee for applying (not guaranteeing acceptance), you show the city manager your application, he decides your fate.  If he approves, you can immediate set things up without having your neighbors any the wiser, and look forward each year to an ever increasing fee.  If he disapproves, you can take it up before the commission, who will be very wary of approving it out of their fear for offending their employee, so in the end, you're out $35 or more.

This proposed chicken ordinance is bad for all concerned, unless you work for the city and like the free money rolling in each year from citizens looking to get farm-fresh eggs on the cheep-- and failing because of their greedy local representatives.  Like chicken hawks, these avaricious city leaders will go to war over current sound policy in order to approve an ordinance which will directly conflict with (without rescinding) Scottville's rules for chickens.  And you can't even tell them that it's wrong, because they don't give you a time to comment against it before they conduct their questionable business and pass it at their next meeting.

Love that photo you posted above X. This is one of the best articles you have posted. Your analysis is spot on. Not only do you point out the contradictory portions of the ordinance but also the silly, bureaucratic, busy body way Scottville does business these days. I don't mean any offense to the City officials who thought this fiasco up but it's almost like reading an ordinance right out of Hooterville's City Hall. If someone was not familiar with Scottville one would expect City officials to be walking  around wearing straw hats while chewing on a piece of straw. Almost like a watching Hee Haw reruns.

Your are absolutely correct in wondering why the ordinance is being changed and why the added fee. What is going on in Scottville? The public is not receiving good representation and just like Ludington, there needs to be a change for the better. 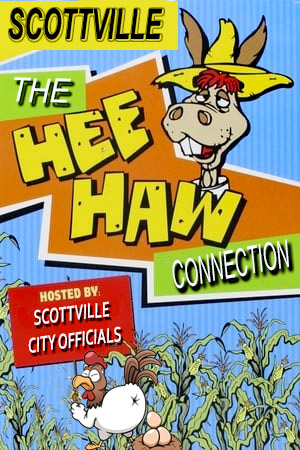