The Real Kidnapping Plot Against the Michigan Governor

Yesterday was the anniversary of what may have been a very dark time in Michigan history.  A credible attempt at holding Michigan's governor (whose initials were GW) hostage was carried out by some desperate criminals.  If not for the quick thinking and action of some government officials, the governor would have been in serious mortal danger.

If you think I'm talking about what happened in 2020 with Governor Whitmer and an alleged plot hatched by a ragtag group of malcontents called the Wolverine Watchmen, guess again.  Remember I said this was a credible attempt, not an FBI-scripted, meticulously choreographed effort to deflect the profound public dissatisfaction with a state administration that removed almost all rights and aim that anger towards a bunch of gullible dupes.  If you are still wondering why the first round of trials against these patsies worked out badly without any convictions, and that there doesn't appear to be any hope for the remaining charges against the others, then you haven't been paying attention.  The FBI was the agency doing bad things there, posing rather than interposing, instigating rather than investigating.

In actuality, the Michigan governor who effectively was held as a hostage (albeit shortly) and was in grave danger of being killed, suffered that danger 72 years ago, not 2 years ago.  Gerhard Williams was elected Michigan’s 41st governor in 1948. 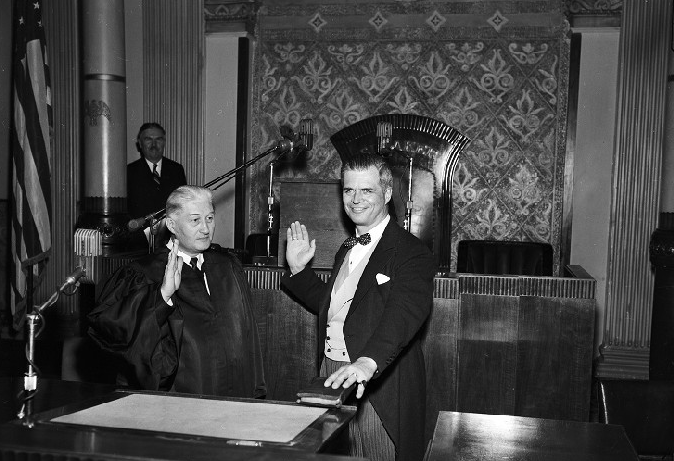 Before leading Michigan, G. Mennen (Soapy) Williams graduated from Princeton and received his law degree from the University of Michigan. He worked for a law firm before serving four years in the Navy during World War II. As an air combat intelligence officer in the South Pacific, Williams rose to the rank of lieutenant commander and earned 10 battle stars.

One of Williams’ first proposals as governor was to update the state’s prison system. Williams accused the state’s prisons of being overcrowded and dangerous. He fought for bills to reduce the crowds and provide pay increases for the prison guards; the legislature did not agree and actually took more money away from the state's correction system.

In July 1950, Williams’ team planned a trip to the Upper Peninsula to meet with some supporters. Among them, Emery Jacques, the warden of Marquette Branch Prison.  According to an article from Marquette Monthly, Jacques had lunch with Williams at a nearby hotel. There, he explained that one of the ways to adjust to the budget cuts was to find cheaper food, cutting the cost of inmate meals from 58 cents to 55 cents per day.

Naturally, the inmates weren’t happy with the cuts and things had become more contentious at prisons across the state. Williams requested a tour to get a first-hand look at the prison and how the cuts were hurting the facility.  Warden Jacques obliged and Williams and his team returned shortly before dinner time. Alongside the governor were State Representative Louis Mezzano, Williams’ personal bodyguard, MSP Corporal George Kerr, and the governor’s pilot.

Governor Williams wanted to eat the same meal as the inmates: ham and lima beans. But as they approached the kitchen, things went sideways.  Inmate Ralph Stearns rushed out of the door and grabbed Williams, holding a butcher’s knife to his throat and dragging the governor into the kitchen. Two other inmates, John Halstead and Jack Hyatt, waited inside. Their plan was to hold Williams hostage and use him as a shield so they could escape.

Trooper Kerr and a prison guard immediately rushed into the kitchen after Stearns. They encountered Halstead, holding a shiv, and Hyatt holding a large metal potato masher.  The fight unfolded in a matter of seconds. The men never made it out of the kitchen.

Prison staff went after Hyatt, Kerr went after Stearns and Warden Jacques blocked the door so no other inmates could get in.  As he lunged toward Stearns, Halstead stabbed Kerr in the back twice. Injured but not out, Kerr was able to pull out his handgun and fired one shot, hitting Halstead in the stomach. He then turned the gun on Stearns and threatened to shoot if he didn’t drop the knife.

Stearns was seemingly more upset that his escape plan failed than any desire to kill Williams. The Marquette Monthly claimed Stearns yelled that he could have killed Williams if he wanted to, but he didn’t “deserve it.”

An Associated Press report said Williams appeared to take the scare in stride, appearing calmly and crediting Kerr and the prison staff for their bravery.  “The very fact that I’m still alive shows the warden knew how to handle the situation and had discipline in good shape. I won’t be demanding an investigation."  He would later use the incident to more successfully advance his prison reform measures.

Hero of the day Kerr survived his stab wounds and was shortly promoted to sergeant; one prison staffer suffered a head injury and another broke both of his arms.  Uninjured, Hyatt and Stearns were thrown in solitary confinement. Halstead was rushed to a nearby hospital where he died days later of his gunshot.

G. Mennen Williams would go on to serve five more two-year terms as Michigan’s governor, most notably approving the construction of the Mackinac Bridge and starting the Labor Day tradition of leading the Mackinac Bridge walk.  Eventually, he served with the JFK administration and wound up on the State Supreme Court before retiring.

I've never heard about the plot against Williams. Very interesting story. The Warden and others put an end to this situation immediately without calling in a "swat team" or locking down the prison. Maybe because most of those involved served during WW2 and acted like men when it was necessary, unlike the wimps now days who quiver if their gender is not acknowledged. What a difference between then and now. No wonder masculinity is under attack. It's a threat to the screwed up left.

The articles linked in your post come out of USA Today and they alone need to be criticized for the idiotic way they reported this story about Whitmer. If a person did not know what has been going on about this situation they would have been scratching their head wondering how was it possible for any of these men to not be convicted. The way the story is put together it seemed to be a slam dunk for the prosecution, but that's not what happened. The mindless USA Today never explains, in detail, why the defendants were aquitted. Very poor job by USA Today reporters.

Williams was before my time so I didn't learn about this until I was researching some other things and thought I would relate it to our readers, and do a little comparison and contrast with the 2020 farce.

If you think the USA Today article was wrote for consumption by 'progressives'-- which it is, of course-- at least they present it more fair than other lefty outlets that leave you in the dark completely about the why.  The one person who testified in their defense, was absolved of all four charges against him; I think the others would have fared as well if they had too since the prosecution rests almost primarily on a confidential informant who appears to have been paid for getting these people convicted by making a narrative and getting the others drunk and high to cheer him on.  Classic entrapment, this is your FBI nowadays, making criminals out of those they disagree with politically while failing to bring forth to prosecute their political, criminal friends.