Back when the Ludington Torch first reviewed 'reverse angle parking' in March 2015, the concept was not being considered for Ludington.  It was, however, something that I foresaw was coming around the bend in the road.  With the latest revelations of the City of Ludington (COL) and Michigan Dept. of Transportation (MDOT) collusion in forcing the Ludington Avenue Road Diet (LARD) upon us citizens and our visitors, this aspect of the reconfiguration deserves a new and updated look, to show that it will make the transition from 5 lanes to 3 lanes even less desirable. If you recall, reverse angle parking (RAP) differs from angle parking in that once a parking spot is found, you signal a turn, stop beyond the spot and back in, this is why it is sometimes called back-in parking; angle parking involves one step of slipping into the spot, just like parallel parking when two or more adjacent spaces are available.  Otherwise, RAP is marginally easier than parallel parking between two other parked vehicles.

As noted, Paw Paw adopted RAP in their downtown and nine months later the citizens were up in arms.  This southeastern Michigan city spent $100,000 on the update that drove residence and local businesses crazy.  According to WWMT Channel 3, "an overwhelming 93% of people surveyed" wanted to do away with the reverse parking situation, even with the knowledge that it would cost more than $100,000 to 'reverse' it back to normal.   The village president, noting it as a costly mistake, wished more people would have spoken out against it when it came before the council. In a public record the COL tried to suppress from being publicly viewed by violating the FOIA to do so, the use of RAP between William Street and Rowe Street (5 blocks, both sides) was depicted clearly on the restriping.  Since changes in the law made in 2013 gave MDOT more say on the matter, they issued this executive memoranda in 2014 declaring the tenet of Traffic Safety Note 705-A:  "Pull in angled parking will not be permitted on state trunkline.  Only back-in angled parking will be considered."

It should be noted the 2017 Ludington Ave Capacity Analysis does not explicitly or implicitly factor in the addition of RAP into the matrix as it should if this change is being considered.  This is proper at this point because the Ludington City Council has not had a resolution to allow MDOT to do another capacity analysis based on the proposed change. 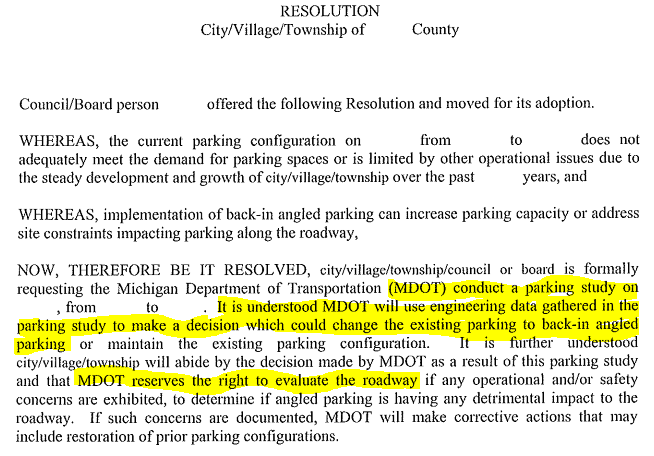 It is quite probable that this resolution would be quickly evaluated and passed by the COL if they vote to go ahead with the lane reduction from 5 to 3 in this five block area, since the city manager and DDA members have said one of the benefits for this change would be to possibly create more on-street parking spaces than the current parallel parking arrangement.

There are no existing comprehensive studies or experiments dealing with comparing the relative safety between angle parking and RAP.  The limited amount of studies that have compared the two have been very limited on their focus and conclusions.  The studies did not identify the causes or types of accidents, did not measure traffic flow, and did not measure the impact on business and they often used invalid comparisons, typically comparing reverse-angle parking to parallel parking rather than to head-in parking.

Most of the proponents for RAP concentrate on the safety benefits of leaving the parking space rather than other factors, involved in parking.  Few would argue that it should be safer/easier getting back on the street with RAP, or putting things in your trunk.

It would also be inarguable that angled parking is much safer/easier than doing the three-step original parking than RAP.  It does have many other distinct advantages regarding safety and health issues in a downtown setting like it would be in Ludington (noting that cars often park and idle in summer/winter to power the AC/heater):

* Less chance of scraping paint with parked cars when parking

* improved  possibility of parking within the lines

* outdoor dining will be greatly inconvenienced with exhausts pointed at tables

* avenue side vegetation will be damaged by exhaust fumes

* in summer, stores with open doors will have increased exhaust exposure

Many people will be tempted to cross the median and park head-in on the opposite side of the street, a maneuver which most locals will learn not to make over time with proper signage and enforcement, but tourists will make these very dangerous maneuvers during the summer.  Medians are often called for, but a turn lane will prevent installation of same.

Unknowing tourists will also not be expecting somebody to stop in front of them between two intersections and start backing up.  It should also be noted that a vacant parking spot will be harder to see until you pass that parked truck or van concealing it, meaning that some will be forced to make a rather quick stop to get that parking space.  If they don't stop quick, the vehicle behind them will have advanced far enough to prevent them from making it.

Safety, health, and convenience factors seem to point away from RAP when compared to head-in angle parking, and even compared to parallel parking.  But the biggest effect may be the one most people don't see at first:  the effect on businesses that happen to lie along a RAP street.  In Austin, they looked at this aspect a few years ago:

And back in Paw Paw, Sheree Knopp, assistant manager of Lori's Hallmark Shop at 219 E. Michigan Ave., said the reverse angle parking had made customers unhappy in the ten months it was available in her city. "It's really hurt our business," she said.

"Most of our customers are elderly and they tell me they are not even going to attempt back-in parking," Knopp said. "They are circling around, circling around, trying to find a spot in back. We would like to see it changed back to the way it was before."

In Paw Paw, the city council and city manager came to their senses after their $100,000 experiment failed miserably.  Let's compare our situation to theirs and learn from their mistakes.

Even when you take the nuisance collisions with grandma and other pedestrians on the sidewalk out of the equation, riding the sidewalk is more likely to get you hit by a car going into or out of a driveway or smashing into you while you're on a crosswalk because you're invisible and moving a lot quicker than motorists expect for sidewalk traffic.  Try to ride a bicycle 12 mph or greater all the way up or down a South James Street sidewalk during the summer.  Better yet, don't because it's so dangerous at every cross street and driveway, and everywhere else it's dangerous for you and other sidewalk traffic.

If you're a little kid learning the basics, use a 'safe' sidewalk without driveways and alley crossings; otherwise the street's safer.

The rest of the bicycle community even comes to the same conclusion. This Cornell report may not be totally conclusive, but makes the case and cites some other studies.

As I see it there is only one solution to this problem if they are truly serious about altering the traffic flow. My solution would solve all the problems. Make Ludington Ave. one way heading east. Hopefully when the Council, Mayor and Manager leave City Hall they won't be able to find their way back.

Good one Willy, and oh so true nowadays, shame it's this way now.

I wonder how much of back-in parking is fallout for having an inadequate amount of parking spaces for the Bowling Alley Scheme Apartments.

The city will be losing about 40 spaces in its current city lot.

There will be about 85 spaces created. However with the ground floor retail establishments about 24 spaces will be needed for their customers and employees beyond the 10 spaces along south Robert Street. That leaves about 60 spaces for apartment residents.  Add on the fact that roughly figuring there should be about 1.3 spaces for each 1 bedroom and 1.6 parking spaces for each 2 bedroom apartment and suddenly they are short about 30 spaces.

Is this entire reverse angle parking just another downtown scheme to try to create some additional parking spaces for those that will be lost?

Can the apartment developer get financing while have inadequate parking?

Will the real reason that the former Maude's Garage location is slated to be razed is to provide additional parking and not as stated the condition of the building is beyond repair?

Shouldn't the developer  be forced to install a multi level parking garage in order to have adequate parking?

Hello city commissioners, do you have a clue to what you are doing?

Permalink Reply by Guidothesemipsuedocaptitalistpig on January 7, 2018 at 10:48pm

Just as a casual observation, trying to parallel park in my time in Ludington. It is almost impossible to get the current traffic to observe a vehicle with a right turn signal trying to park as it is now. Why in the world would it be better to force reverse angle parking? Do we have any examples of this parking anywhere else in the state? I was seriously thinking of moving back to Ludville, but things like this seem more like induced demolition derby tactics than serious improvement. I can see a few accidents happening when those not familiar with this scheme panic and think they entered a one way street the wrong way. And did you say 2 lanes each direction but no longer a turn lane?? A can see a car traveling at 25, the posted speed limit down town, T boning a car just pulling out without clearing traffic. A very possible condition with all of the alcohol serving businesses in the downtown.

After having reviewed some of the experts' work product and opinions on the matter, I am more likely to trust a casual observation than theirs.  Ludington Avenue will be three lanes for its extent rather than five (or four where there's no turn lane).  If RAP is not invoked, there will be no parking gained, the 'extra lanes' will just be untraveled shoulder.  The only thing to be gained either way is much slower traffic, more dangerous conditions, and a lot of upset tourists and commuters.