The Stolen Ludington Election of May 2022

May elections are notoriously used as a means to pass school millages, school bonds and other local initiatives that would have a very difficult time passing on the November ballot.  This is because only about 20% of the registered voters turn out in May, but about 60% of the voters (three times the amount) come out in November.  Schools realize that if they can get out most of their people and advocates in May to make up a large part of that 1 in 5 people voting, they can pass something that would never pass muster in the fall.

That explains why the Ludington schools sinking fund renewal was on the May ballot, and why the renewal question was pretty much kept quiet for the most part.  The fund is supposed to be used for maintenance, but the district should have minimal maintenance with a new school and massive reconstruction of the middle/high school complex.  Had people looked at the list of projects on the school's projected uses of this fund, they would have likely wondered why it was really needed and why the district had twelve years of projects for a ten-year renewal.  But a main bloc of voters were just looking for money for the schools and would vote for it regardless of whether it was needed.

The stolen election, however, did not happen with the sinking fund's renewal.  The City of Ludington had a very simple question on the ballot, it will likely turn out that the question was just too simple.  It asked, without supplying any explanation:  "Shall there be a general revision of the charter of the City of Ludington?"

It also prompted voters to vote for not more than 9 charter commissioners, listing four who went through the petition process to get on the ballot and nine other spaces for write-in candidates.  Again for the poorly informed voter, there was no explanation of what the charter commission was or whether such a vote was contingent on the other vote.  That is, if one had voted against the revision, many of those voters might bypass voting for a commissioner, let alone nine with at least five write-ins.

I (using my Christian name, Tom Rotta) had been one of the 'official' write-in candidates, meaning that if I received enough votes, I could actually serve on the commission because I did the necessary paperwork.  Other than an April 4th article on this media urging people to vote against the charter revision, but to write my name in, just in case the revision passed, I didn't waste any money or twist any arms to get people to vote for me.  I actually engaged in suppressing votes for me and 'no' votes against the revision by telling my loyal readers in my May 3 election guide that the revision vote was meaningless due to the city council not performing their duties.

Nevertheless, in Wednesday's newspaper, Justin Cooper duly reported that I had finished fourth among the write-in candidates, eighth altogether, thus making me an elected commissioner: 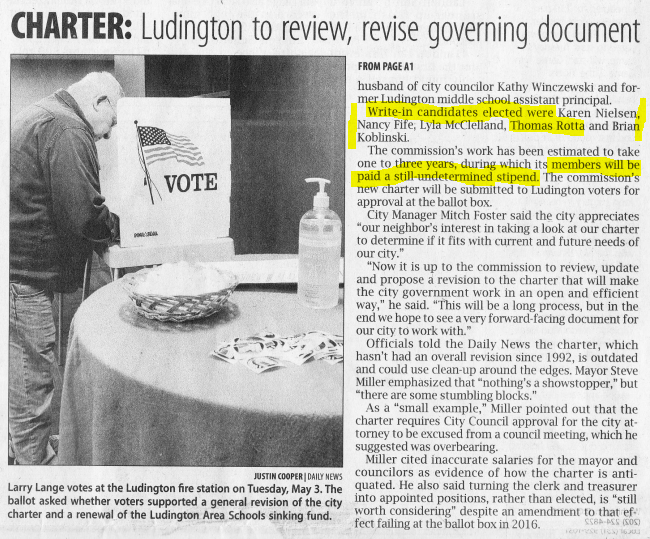 I actually wasn't all that concerned about the election results since I was in the belief that it would be found a null vote, I didn't actually hear anything about it until I ran into Probate Judge Jeffrey Nellis at the tennis courts coaching on Wednesday night, where he congratulated me on being elected to the commission.  He was actually at the courthouse when they were counting the votes.

I went to bed dreaming of telling the city council about how I could not serve on a commission that was not lawfully created, but shortly after waking up, I had an email from the county clerk, Cheryl Kelly, telling me she wanted to talk to me in person.  My dream was shattered shortly thereafter.

I met her at the courthouse, and she, Ludington City Clerk Deb Luskin, and I sat down in a conference room, where they explained to me that the COLDNews reporter had gotten an unofficial result and that they had actually overlooked several write-in votes in the First Ward which moved me from 4th place among write-ins to 7th place.  The COLDNews would do a correction in today's (Friday's) paper: 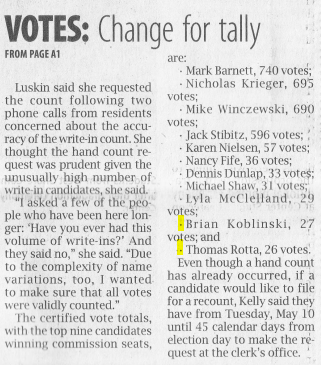 I was able to review some of the material at our face-to-face meeting, it was clear that some mistakes were made, but the two clerks were suitably contrite.  Interestingly, I had been the highest vote-getter among write-in candidates in both the Fourth and Fifth Ward.  But again, I was gracious in accepting my defeat since I'm confident that the vote will not matter in this stolen election.

Because the election was stolen from the people by the city council not doing their duties.  One can look at the 2022 Budget.pdf (passed after they passed a resolution to put the revision question on the ballot) for the City of Ludington and not see any money set aside for what may be a potential costly revision process.  In the Wednesday article, Reporter Cooper notes that the commission board members will be paid a 'still undetermined stipend', he could have added that there is a still undetermined projected cost of what the revision process will take.  The law says the compensation and costs must be fixed before a vote can be taken:

The legislature's intent is to make sure that voters are aware of how much a charter revision will cost them.  When the City of Detroit created a charter revision committee in 2018, just six years after their prior CRC, they budgeted $1.5 million over three years.  They properly related that number before the vote was taken.  The commission likely spent that and more and gave this fantastically progressive product to the voters three years later:

Even though it offered amnesty and reparations that would have cost billions, more than two of three Detroit voters sensibly said no.  A lot of money and time was spent with no results, but these commissioners got their money for their meetings and made a lot of attorneys happy.

This therefore is the theft of the May 3rd election, where the city council bandits failed to fix the compensations for the CRC and fix the costs of the CRC before the election where it passed easily.  Many of the 'yes' votes were unaware of the potential costs of the simple proposition and the compensation of the members, which, through statements made at meetings, will not be free.  I would not be serving on a committee created contrary to law, and I expect other dedicated candidates would not do so either.

Permalink Reply by Freedom Seeker on May 7, 2022 at 7:11am
This is surreal. Like a dream. I appreciate your ethical judgment to not accept an election due to the failure to establish compensation of the CRC before the election. But, how was there such a decrepancy in the tally that you were acknowledged by the LDN and Judge Nellis?

From what I was told by the clerks, mind you that the actual ballots and final tallies were under lock and key at this point for security reasons, and the non-official tally was all that was available to me, it had a suspicious absence of votes for three different write-in candidates in the First Ward.  With every write-in candidate getting at least 20 votes in six wards, three people getting zero in a ward was statistically improbable-- not as statistically improbable as what happened in Michigan overnight on November 3rd, 2020 with Donald Trump getting practically zero votes against 140,000 for Joe Biden-- but improbable nonetheless.  Thus the reason given (missing votes for the three candidates on the back of the 1st Ward sheet) was plausible.

If I honestly thought the revision vote was legit, I would likely ask for a recount because I was told that there were some votes for Xavier Luft (my Facebook persona which many there think is my real name) and others that were disqualified because they wrote in my name (or others too) and didn't darken the corresponding oval.  My understanding of Michigan legal precedent is that the intent of the voter for write-in candidates need to be adjudicated by the canvassing board.

I would guess that the vote now is correct as I am sure they would know  " YOU " would request a recount. Previous election recounts came out right on the count .  Will be interesting to see how many votes Mr. Luft got.

My intention is to nullify the election because it was held in violation of the law, failing to inform the electorate of the cost and compensation of a revision process that appears to be free on the ballot.  The ballots can then be better inspected to see whether the canvassing board actually did their job correctly.

I would only do a recount if for some reason I get nowhere with the plainly-stated law which assigns a duty to the city council to fix the parameters.  I don't see that happening, but public officials can sometimes surprise me when they choose not to follow laws on the books.

This was either a blunder beyond blunders or inept personnel or just plain corruption. I know that you explained it X, but with the bad smell from the 2020 election still hanging in the air, Ludington now has their own version of nastiness in how an election should be conducted. How could those in charge and those that reported the election get it so wrong. In my opinion if the name, Tom Rotta,  had not been a write in we would never have had this malfeasance. Then again, how many times has this happened and we never heard about it. With the local crooked politicians and the crooked news agencies the voters could have been easily duped in all past elections. I have a bad feeling that this was of course done on purpose and that they are confident it will remain their secret. I think that they have discovered a loop hole that will allow their so called mistakes regarding how this charter deal was put toghether to withstand a court challenge. Either way the citizens will be the losers. The attorney's for the City are going to make a bundle again.

I was actually impressed with the amount of data the school put out regarding the $101 million bond, Superintendent Kennedy had compiled that on the school's website in a fairly easy to navigate section.

The problem was, that few people who voted knew of the information posted and many of those didn't actually analyze the data if they knew because it was so comprehensive.  What people saw was the school and their proponents (typically those who would benefit financially like the local bank, the architects and other contractors) offered misleading propaganda and actively worked against those who felt it was a bad idea to move the school to the hinterlands and spend a load of money to do so.