Decades before massive wind turbines were erected in the communities of southwestern Mason County an ambitious and more costly project involving multiple turbines was created in that same neighborhood.  Between 1969 and 1973, the Ludington Pumped Storage Power Plant was constructed, consisting of an oblong reservoir 1 mile by 2.5 miles long and 110 feet deep elevated well above and connected to Lake Michigan by a series of six penstocks, each of those terminating with a massive turbine that can generate over 300 megawatts.

It's likely that if you grew up in Mason County around that time, your school would have made a field trip out to the facility to observe the incredible civil engineering feat that cost $315 million and was the largest of its kind made at that time.  You may not have understood the concept of how and why it was constructed, but you definitely could appreciate the scale of it and know it was working by the humming of the turbines when you went through the plant.

It works effectively as a giant battery, using some power to draw water uphill with pumps to the reservoir and through the reversible turbines during periods of low energy demand (night), then releasing water downhill as needed during peak use times, when gravity supplies all the needed energy to turn the turbines and make lots of power.

Two years ago, when Consumers Energy was in the midst of costly upgrades, including replacement of the turbines, they decided that one of these 336-ton metal turbines might make a good conversation piece if they displayed it outdoors.  This was a dream that was recently realized by the creation of a 'Turbine Monument' just off the roadside on South Lakeshore Drive, visible as you crest the hill just south of the bridge where you pass the penstock tubes. 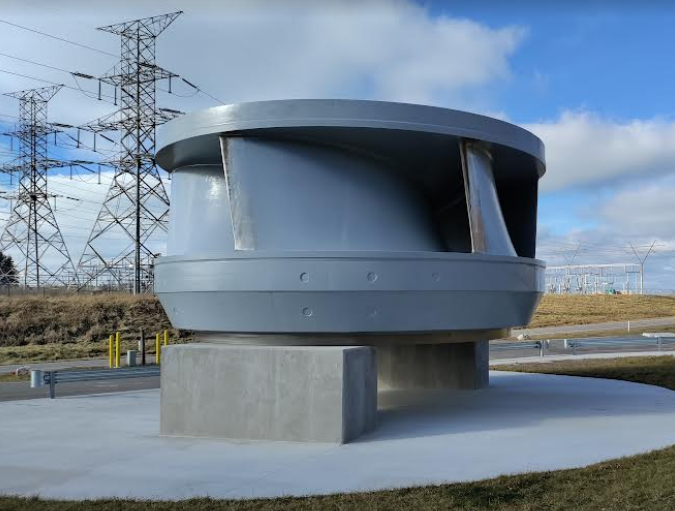 Just completed this month, the Turbine Monument offers an additional sight to see at the plant which has a park, disc golf course, scenic overlooks, among other nearby points of interest.  As you can see the heavy turbine is mounted on sturdy concrete blocks set on a sturdy concrete foundation. The arrangement allows for folks to look underneath these humongous turbines and see their fairly simple design which supplied many gigawatts of power over their half a century of operations. 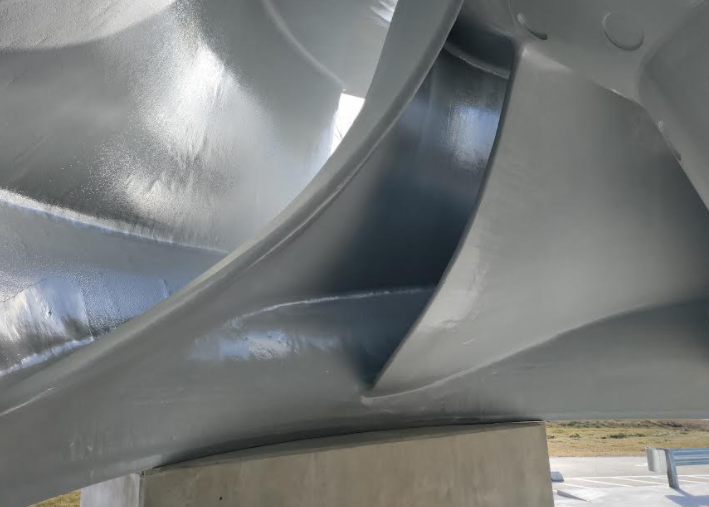 “There was a decision made to create a monument out of one of the old turbine runners instead of cut it apart, in order to save what I will call our iconic history at the station,” said Jason Durand, plant manager, “What it stands for and what energy it provides. To help provide the general public, whether it be kids in an educational platform or just the average party doing a sightseeing tour and wonders what the station is all about.”

The new turbines, found under the circular white structures near the lake, will continue supplying the area with power at least until the latter parts of this century.  Consider visiting this new monument the next time you're in the neighborhood.

Permalink Reply by MED on December 18, 2021 at 4:46pm
A few years ago, we toured the place with a friend who worked there. It was fascinating to me to see all the screens in the control room showing the price of energy as it fluctuated. And walking way below lake level to stand next to those turbines running.
And the entire "wind farm" that was erected could not even spin one of those turbines!
Seems to be a very efficient way to add to the power grid. Oh, and they control all the dams in the state from there.

I don't remember a whole lot from when our MCC class went to the PSP in the '70s, but I was given a refresher course when I was on the Ludington Fire Department.  The PSP had a couple of fire alarms in a relatively short period which required firefighters in air packs to investigate the subterranean levels of the facility.  Very hard to think or communicate in such situations because the alarms continue until an area is confirmed to have no fire, and it would be difficult to fight a fire because of the time it takes to get around that remote area and leave enough time to get back out without running out of air.

Shortly thereafter, at one of our LFD meetings we had our own field trip out to the PSP and were given a tour so that we would be able to be best prepared for subsequent alarms.  I can confirm that impressive control room.

One of these days I hope to take a tour. It is a fascinating piece of engineering. I have often wondered how in the World does it make any sense to go to all of that expense just to provide more electricity for day use by filling the lake at night then releasing water in the day time. I was told that electricity costs were so low at night that a profit could be made by selling the excess energy created during the day at inflated day time prices. Anyone know for sure how this projects costs have stayed in the black.