Governor Whitmer (in multi-colored mask) ironically rubs shoulders with protesters of the abuse of white power and privilege.

Two points that should be noted with this continued usurpation of power from the people and their representatives in the state legislatures, not to mention their judicial officers.  The first is that not every state declared a state of emergency, nor has any one governor used it as tyrannically or arbitrarily as this governor has used it (if anybody wants to nominate some other state dictator for that distinction, I will gladly debate you).

The second point is that the concerns behind the original state of emergency no longer exist.  On March 10th she said upon declaring an emergency:  “Ultimately these recommendations are about slowing the spread of the disease to ensure that medical facilities have adequate staffing and resources for vulnerable populations and those who are sick.”

As of June 15th, hospital bed occupancy in Michigan hospitals is at 66%, as seen on this state census: 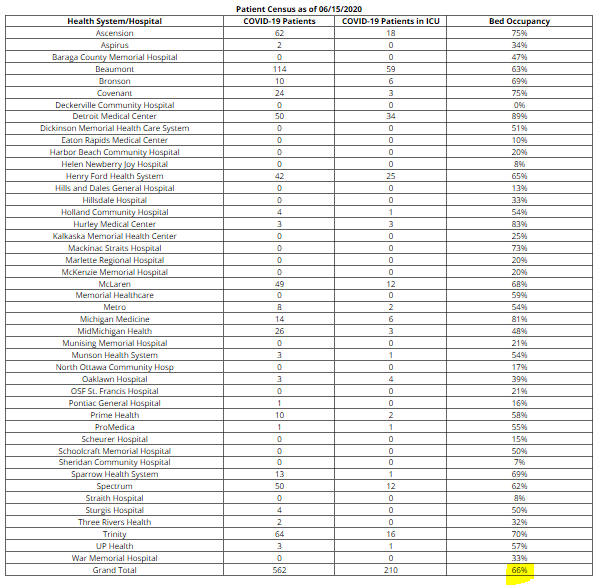 This is totally in-line as to the hospital bed occupancy during the lean times, when no 'pandemic' is around, the CDC reports that occupancy rates in Michigan hospital beds have been either 65 or 66 percent since 1990.

Since the state of emergency was declared so that our hospitals would not be overwhelmed with coronavirus patients, why are we keeping the state of emergency ongoing when the bed occupancy is normalized and all data points to the USA being on the far end of the epidemiology curve?  If you can't realize the obvious, it's because our governor wants to retain her unearned power that will surely be taken away at some point-- if not by a bunch of weak-willed legislators, then by the people suffering under her leadership.

Thanks X for the statistics. I can verify the statistics for Sparrow Health System. I was talking to a friend yesterday, who works at Sparrow Hospital and I was told that only 1 serious case of Covid19 was housed at the hospital. People who are trying to predict a 2nd coming of Covid19 don't seem to realize that like the common flu season, it never ends. There are flu cases well into the times of the year not considered flu season. It's only natural that any virus keeps circulating until it runs out of victims. The left are going to try their best to duplicate another shut down before the November 2020 election and we can expect anything to happen that will cause upheaval. Lucky us that the pea brained voters elected  a radical Governor. During some of my wanderings around the State I have noticed many yard signs thanking Whitmer for her leadership. These people have the brains of geckos. I agree about the weak-willed Republicans who have yet to challenge Michigan's wicked witch of the left and remove her power over the people of Michigan. The insanity continues. 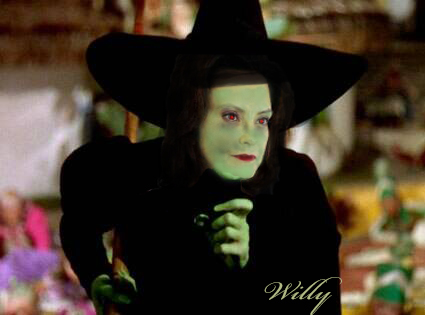 Whitmer's next executive order, ''It puts the lotion on its skin or else it gets the hose again.''

As long as the media only props up bad science, this will be a never-ending virus.  Let me run through it once again.  Over 2.8 million Americans die each year from any cause.  Let's say there is a dominant strain of flu called Covid and that it kills about 40,000 this year-- if we just look at a normal 0.1% fatality rate, that means 40 million American survivors have the antibodies in their system, or about 12% (40M/330M).

If people have antibodies or the virus in their system when they die, they are labeled a Covid death this year even if their real cause might be something much different, thus the amount of people dying from covid is 40,000 actual and 336,000 (2.8M * 0.12) false deaths from Covid in a year's time.  If we just consider the three months that passed us realize it is the dominant flu season, we should expect 100,000 deaths.

Whitmer's next order after that, shinblind, will be to put the f-king lotion in the basket.  Makes me crave some liver with fava beans, definitely with a chianti.