Mere weeks after defeating Hitler's Germany in World War 2, Michigan's legislature passed  Act 302 of 1945, the Emergency Powers of Governor Act (EPGA), giving the governor the power to declare an emergency and act without much restraint until the governor declared that the emergency no longer existed.  The EPGA was actually created in response to 1943 riots due to lack of housing for imported labor for wartime defense plants in Detroit, as multiple newspapers of the time pointed out: 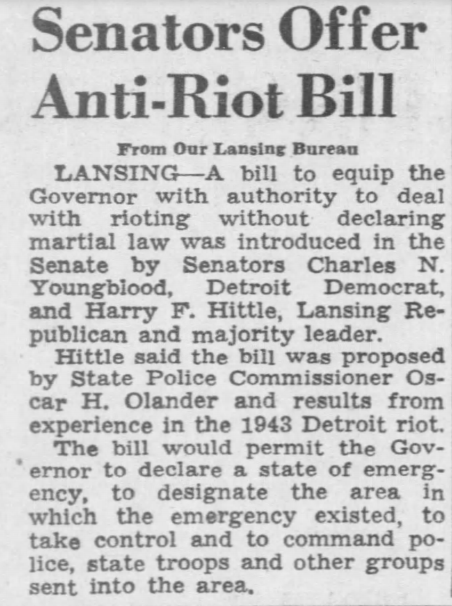 At the end of our country's bicentennial year, the legislature revisited emergency situations by passing Act 390 of 1976, the Emergency Management Act (EMA), a much more involved template of emergency procedures with 23 subsections in total, as compared to the EPGA's three.  Rather than allow the governor to determine when the emergency was over, the EMA required the governor to get a resolution from both chambers after 28 days in order to extend it for a specific number of days.

The difference between these two laws has led to a lawsuit filed by the Michigan legislature against the governor, for Governor Whitmer has relied on the 1945 law, which wasn't specifically repealed by the 1976 law, but legislators insist that the governor required a resolution of extension 28 days into the declared emergency (April 10th).  Since the governor and congress of Michigan are opposition parties and at odds over many of the governor's decrees, it was unlikely the resolution would have passed.

Whitmer won the first round of the suit in May, when Michigan Court of Claims Judge Cynthia Stephens called the legislature's lawsuit "meritless" because state law gives the governor "sufficiently broad power" to respond to public crises like the pandemic.

On August 21st, after hearing arguments earlier in the month at a hearing, the Michigan Court of Appeals declined to say whether Whitmer exceeded her powers under the EMA. The 2-1 majority opinion said the question is moot, since she was empowered to take the same actions under the EPGA.  "We hold that the governor’s declaration of a state of emergency, her extension of the state of emergency, and her issuance of related executive orders fell within the scope of the governor’s authority under the EPGA.  We further hold that the EPGA is constitutionally sound." 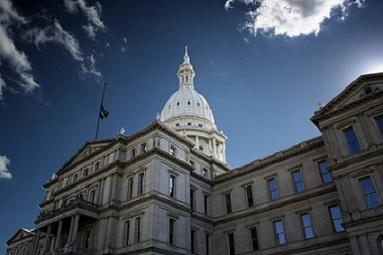 On September 9th, the Michigan Supreme Court has set a hearing for arguments on the legislator's appeal of the rulings.  Whereas the loss in the lower courts may be setbacks, the court of appeals ruling has a silver lining, a well-written dissent by Judge Jonathon Tukel spanning 21 pages.

Tukel claimed it was not accidental that legislators specifically included the term “epidemic” in the 1976 state of emergency law that, unlike the 1945 law, precludes a governor from seizing unilateral control of the government with no end date.

Tukel argues that because the 1945 law does not include the term “epidemic” and the 1976 law does, the governor must rest her emergency powers authority on the 1976 law “with its associated time limit. “We assume that when the Legislature crafts legislation it knows what the existing law is, and takes it into consideration."

Judge Tukel points out that the court's majority interpretation gives the governor full legislative and executive authority during any proclaimed emergency for an unlimited time, which violates the separation of powers doctrine, making the EPGA unconstitutional.

He concludes:  “This result by the majority constitutes anything but a harmonious construction; it is a completely discordant result which does not even attempt to reconcile the inconsistencies between the two statutes, but simply lumps all of the various aspects of them together, throws up its hands, and concludes, essentially, “Who are we to say that the Legislature did not intend to nullify its own work?”

Frankly, the opinion of the majority seems rather weak on legal terms in comparison to the dissent by Judge Tukel.  Expect the Michigan Supreme Court to find that the later, more precise, law will take precedence, but don't be disappointed if they issue their opinion towards the latter part of the month.

I'm no attorney but it seems to me that as long as the 1945 law is on the books, the Governor can enforce it's regulations. It's up to the legislature to remove the old law from the books and that is why everyone needs to get out and sign the petition UNLOCK MICHIGAN. This petition instructs the Legislature to cancel the 1945 law so that the 1975 law will be the only legislation Whitmer can enforce regarding the Covid19 lockdown.

I'm no attorney either, though I've had to prosecute the law on numerous occasions, but I think the plaintiff legislators failed to present the legislative intent of the 1945 law where they were never envisioning the use of it for a statewide epidemic.  Nor did they attempt to compare the two worldwide pandemics that occurred between 1945 and 1976, the first happening in 1957-58 killing 116,000 Americans, which would be the equivalent of 230,000 Americans in 2020 with our increased population.  The 1968 H3N2 killed 100K Americans (roughly 170K with 2020 population).  Neither governor at those times used the EPGA to assume absolute power.

Perhaps that's why the legislature added the explicit term "epidemic" in the 1976 law, to allow for emergency powers to be utilized during times of a supervirus or superbacterium.  When two separate laws can apply to a certain situation and it's taken to court, most judges defer to the most recent law, because it is understood that the lawmakers knew of the prior law's application.  One could argue that since the first law isn't repealed, that it could still be relevant when figuring out what applies-- that's what the governor's lawyers argue, the majority ruled on, and what you've acceded.

I just think it's a weak and counter-Constitutional view, which is why I think the Supreme Court will knock it down, using reasoning much like Judge Tukel used in his voluminous dissent.

You should be an attorney. That could be your next project because your reasoning is much better than most attorneys.

I think the key word in all of this is "epidemic". I have found that in most cases when laws are in conflict the most restrictive law would apply. Since the 1976 law mentions "epidemic" and not "pandemic" then it would follow that the Governor is acting on a situation that is more widely spread and more serious, thus calling for a more aggressive response. Since officials have ruled Covid19 a pandemic this has given Whitmer an excuse to use the 1945 law.

"An epidemic is defined as “an outbreak of disease that spreads quickly and affects many individuals at the same time.” A pandemic is a type of epidemic (one with greater range and coverage), an outbreak of a disease that occurs over a wide geographic area and affects an exceptionally high proportion of the population. While a pandemic may be characterized as a type of epidemic, you would not say that an epidemic is a type of pandemic."

If I should be a lawyer, you should be my assistant, because you always bring up very good points, like you did here, that challenge my legal theories.  We should note that the legislature has filed a civil suit, and not a criminal suit in this case, that means quite a bit actually to the court.

In criminal law, the rule of lenity requires the court to resolve any statutory ambiguity in favor of a criminal defendant.  Were this a criminal prosecution, one would be inclined to give the defendant, in this case the governor, the benefit of the ambiguity/doubt and rule in her favor.

But in civil law, where a statute is ambiguous, well-established precedent says a court will defer to an "agency’s" interpretation of a statute it is tasked with administering, so long as that interpretation is “reasonable.” Chevron U.S.A., Inc. v. Natural Resources Defense Council, Inc., 467 U.S. 837 (1984).   In civil cases, courts may be more apt to promote the remedial purposes of a statute (or two ambiguous/conflicting statutes) rather than construe it narrowly, as a court would in criminal cases.

As for your distinction between epidemic and pandemic, both of the two epidemics I mentioned were pandemics, like covid-19, and thus more serious epidemics as you note.  An analogy:  let's say your harbormaster has a strict rule that he will not let you take your boat out of the harbor when there is gale force winds.

If there is actually hurricane force winds do you think that would allow him to let boaters take their vessels out?  It's reasonable to assume that these are just stronger gale force winds and require a boating ban, but if you were reading the rule strictly, you could justify letting them boaters test their seamanship when it's went beyond gale force.

I don't know X. I don't see these laws as being ambiguous. Both clearly state the Governor can declare a state of emergency if she deems it necessary. With the help of other officials, in this case, being medical experts, she can say she is relying on medical advice from professionals.

There are 3 ways that I can see this going. The first option is upholding the Governors authority given to her under the laws in question. This is highly probable and might be the only way to work within the Constitution.

The second option is for the Court to declare the 1945 law unconstitutional but if that were done then that would mean the 1975 law would also be in the same boat.

The third option would be that the judges would throw the suit back in the Legislators lap in order for the  Legislature to fix the legal entanglement of having 2 similar laws. This is something the Legislative branch should have done when they passed the 1975 law.They should have just repealed the 1945 law back in 1975.  After all it's not up to the judges to make or alter the law, that is the Legislatures job. I think the Republicans did not choose to repeal the law when Whitmer revealed her Fascists roots because  being the cowards they are, they did not want to take the heat just in case the virus ended up being a true pandemic so instead they tried to have the courts do their dirty work for them so they could tell the voters how much they are trying to put the reigns on the Governor. I believe option 3 will be the courts choice. Just a guess.