Cite the Rider, Then Cite the Media

An SUV-motorcycle crash near Coopersville illustrates a couple of interesting points.  The picture below is where the crash took place where 56th Avenue crosses Wilson.  Those who know Ottawa County roads should be familiar with their nomenclature pattern:  north-south roads are numbered avenues, east-west streets/roads are named after successive presidents.

So when two trusted news sources claim a biker is traveling eastbound on 56th Avenue where it crosses Wilson, you know something they're reporting is wrong.  When these same two sources claim that there's a stop sign on 56th Avenue, the above picture clearly shows that's also incorrect, the stop signs are on Wilson. 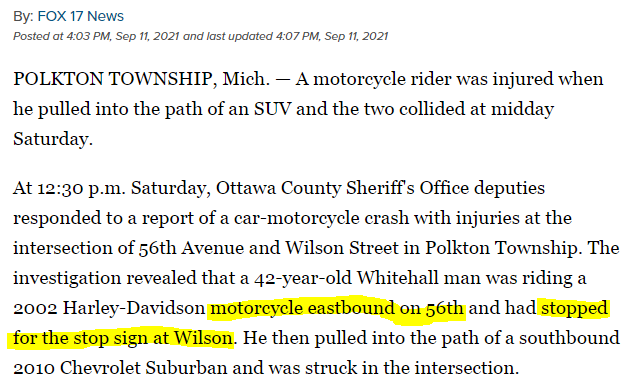 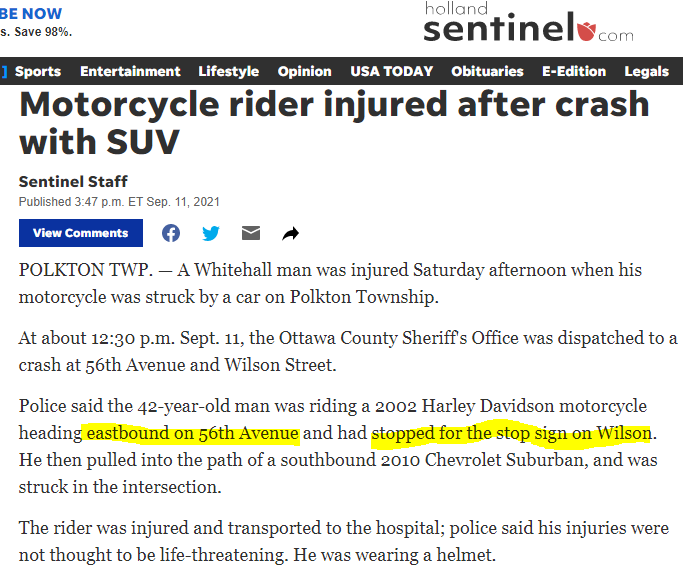 Fortunately, at least three other media (Mlive, WOOD TV, and WZZM TV) also covered this accident and reported that the biker had actually been travelling east on Wilson, stopped at the sign, and proceeded into the path of the SUV heading south on 56th Street.  Had one only read either of the first two sources, they might have thought that the media was erroneously reporting the crash so as to deflect the fault away from the SUV, for had the SUV actually been on Wilson, it would have had the stop sign and would have been definitely at fault for not yielding the right of way to the motorcyclist.

If we advocate for SUVs being cited for seriously hurting and killing motorcyclist by pulling out or turning in front of them, then we must also advocate that the same punishment is warranted if a biker makes that mistake, and injures or kills a driver.  Chances are, when the biker makes that mistake, the vehicle driver will be unhurt, and they will suffer much more than any fine or jail time he/she would possibly get.  But if we eventually want justice against vehicle drivers that kill and critically injure vulnerable users of the road, the law should be fairly applied in both situations.

Cite the rider, then cite the Holland Sentinel and FOX 17.