This is the extent of Exhibit J of the Rotta v. Henderson, Holman, et. al lawsuit regarding willful violations of the Open Meetings Act by Ludington officials.  It begins with a FOIA request sent after the City moved for summary disposition after laying out its case, saying that it did not violate the Open Meetings Act, because City Clerk Luskin posted the notice on May 7, 2013 and swore under oath about that on May 21, after it was pointed out that it was missing before the May 20 meeting.

The camera has been in the lobby for awhile, I noticed it when I was sitting at the desk just left of center of Exhibit I's photo (seen below) way back in 2011.  A close look at the camera angle indicates that the external door is the center of its focus, which makes sense for this security camera. Here's my original request and the answers with files where appropriate, notice the dates: 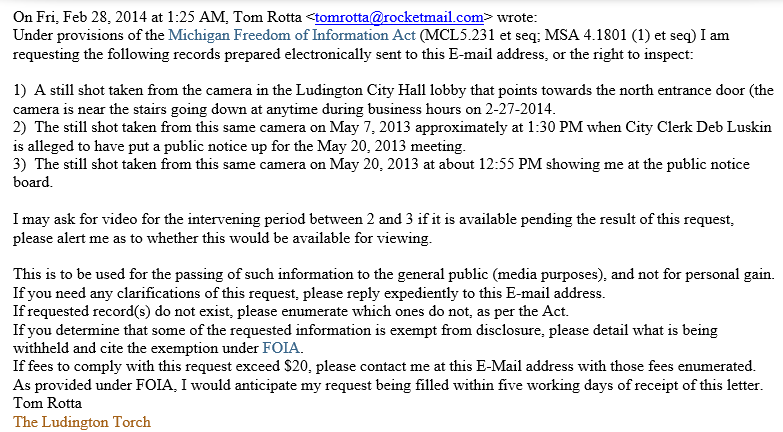 And the Ludington City Council denied me the right to speak at the next meeting, and the judge effectively had no discussion over why they were denying it after the City Manager acting as prosecutor introduced it (56:50 in).  The City Attorney agreed with the reasoning, and Councilor Holman made a comment as to the number of FOIA requests that the City has got from me and others (227) over the last five years.

I am responsible for close to 200 of those requests, less than one request a week for an investigative reporter who has to make a lot of extra requests due to stonewalling and finessing by the City's FOIA Coordinators going out of their way to make the information hard to get.  Which is what they did here.  I could get no 'still shot' from the footage, nor could I get a video file; I was restricted to inspecting the video, which is not what I wanted, not what would help lay out the case in my brief that the City Hall had the means to confirm the City Clerk's affidavit, and the means to find out what foul play took place to remove that notice from the board, and potentially to get me on a misdemeanor if I had the poor ethical judgment to remove it myself or through proxy.

It is ridiculous to decide that a 'still shot' of a video that is a public record is not a public record in itself.  You are not creating a new record, just a 'copy of a writing' as defined by the FOIA.  This is a whole new deviation against the word and spirit of FOIA legislation , and it becomes a very valid criticism of Susan Sniegowski's judgment for if she becomes a Circuit Court judge, she is creating a very dangerous precedent here in showing how she may rule in future FOIA appeals.

I have been invited to watch videos with Chief Barnett before; I reluctantly accepted.  He disallowed me, citing no lawful authority, to bring in any audio or video recording equipment as he flipped through the records with Captain Harry also present.  I was disallowed to get a copy of the public record then, and I was not allowed a copy this time either.  The public has a right to copies of public records in accordance with FOIA.  The City of Ludington are just stewards of those records who should willingly give the public access if they are not exempt from disclosure.

To make the decision to deny the public these public records during Michigan's Sunshine Week, is a slap in the face to the community, and one more sign that this city's officials are living in their own self-imposed Dark Ages.