When City Manager John Shay and the City's primary attorney handling the FOIA appeal, George V. Saylor III, came to court on September 10, 2012 and handed the two plaintiffs a list of fees they were seeking for FOIA requests it left us plaintiffs a little flabbergasted.  It covered 9 separate submissions to the City of Ludington FOIA Coordinator (Shay, since replaced in that capacity) spanning 12 individual requests, all of which were never fulfilled.  The closest to being fulfilled was one that was sent, which did not fulfill the request, was not in the most inexpensive format and sent via mail which also wasn't requested, and so wasn't paid for (#46).

These will all be covered in this group one at a time, because they are instructive in seeing the variety of ways the City of Ludington went out of its way to try to withhold records from the public through a variety of means.  The fees they wished to charge were not generally legal via both the state and local FOIA, the most economical, or often believable.  I welcome any challenge to this assertion, as long as they respect the following part of the state FOIA law:

MCL 15.234(3)provides that “a fee shall not be charged for the cost of search, examination, review and the deletion and separation … unless failure to charge a fee would result in unreasonably high costs to the public body because of the nature of the request in the particular instance, and the public body specifically identifies the nature of these unreasonably high costs”.  MCL 15.234(3).

The first chronologically that the City of Ludington went for was a charge for $1.35 for what they called "inspect Rotta's personnel file, LFD meeting notes, manual" made on 9-21-2009.  When one considers how much time went into quibbling over this one item for just the trial date-- let's say ten minutes-- the costs for the judge's, City Manager, the court reporter's, and Attorney Saylor's time combined would dwarf that amount by at least fifty times.  To put it in perspective of public money that was wasted here by our City and County officials to get this result. 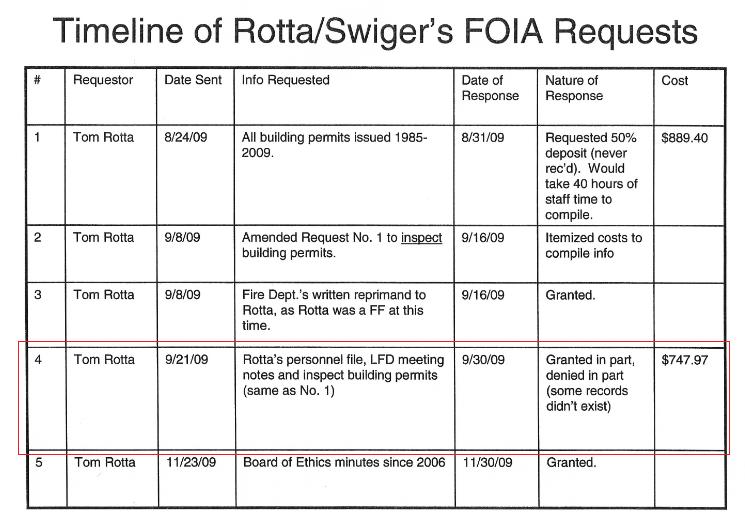 Not exactly an itemization of this $1.35 cost, but then the costs to inspect the building inspector's annual summaries of building permits came with the prohibitive figure eventually explained by Shay as being the cost to have the building inspector watch over me while I go through all the city's address files, which wasn't the request.  This was the extent of my requests in 2009, and that was reflected in their original court conterclaim, which asked for thousands of dollars for a lot of different thing even they would vacate later:

And thus it remained in their final brief, and after that seven more months until the morning of the trial where we were still unsure as to what the City of Ludington planned to charge us for, as in our little minds, there wasn't any unpaid fees.  But the new chart we were handed after the trial began, looked a bit different than the $747.91 used above, here is the snippet from that chart:

It went down to $1.35, a number that I still was unfamiliar with for that request.  My memory and my existing records, had me get the one-page LFD meeting notes, but I never inspected my personnel file or received the manual, so it would have been a $.15 cent charge at most for the one record, as that was the copy rate then.

This recollection is backed up by the city's own exhibit L which showed two FOIA receipts for records I paid for in 2009. 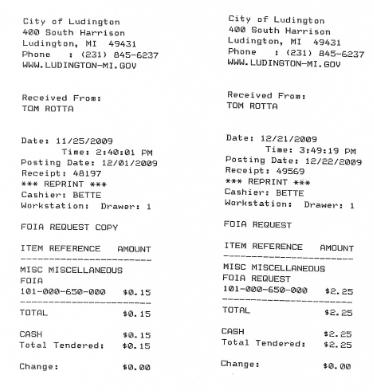 The bill on the right is for FOIA #6, made after the other one which happens to be for only $.15, the amount I remember for this request, even though their date is way off of when I paid it, but before the date of the response for #5.  So by elimination, it must be for the one page of the LFD notes.  If I was given this fictitious table before the hearing actually started, a courtesy generally recognized by courts and attorneys to other litigants and lawyers, plaintiffs could have showed this was a bogus request for a FOIA reply that was already brought and paid for in full.  Here was the court testimony: 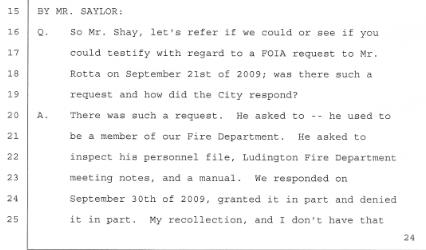 This was the extent of the City Manager's testimony under examination by the city attorney.  I implied the new material the City introduced was new to the discussion and not introduced until today, but Judge Wickens apparently thought this new table of costs actually was the same as the one brought out in the complaint, or just didn't think it was that important to establish an actual debt. 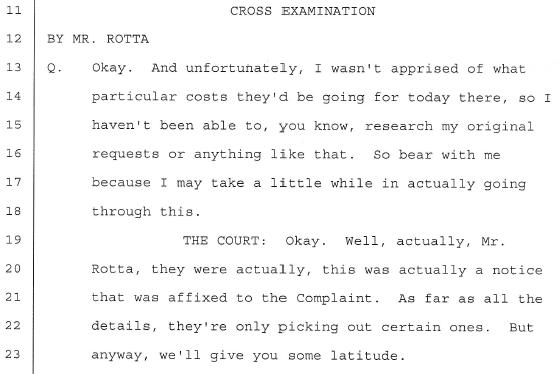 The City Manager was tight with details when I asked about this reply: 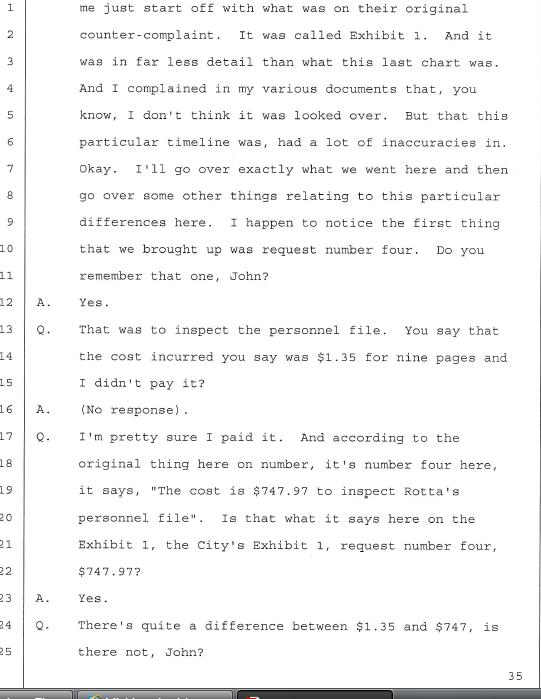 And, of coure, there wasn't any explanation given or surprisingly, expected by the judge, who didn't seem to notice the difference.  So there was never a billing for the $747 or the $1.35, at least that I could find upon my records, Shay, without "having the actual request in front of him", can swear under oath that the request cost the City $1.35, but needs no documentation, except a chart that differs substantially from his previous chart of expenses.  The City had a receipt from 2009 for FOIA from me that could only refer to this request.  The only question one has to ask is if John Shay can lie in court, willfully or accidentally, about a $1.35 charge the City was entitled to, what else is he capable of lying about?  Quite a bit, if you've been paying attention.

Why hadn't the City went after this three year old (at the time) 'debt' (using any method)from me anytime before I had filed a complaint in circuit court?  Quite simply, because there was never any debt, until I filed.