"You can't arrest somebody for not wearing a mask?" says the videographer, yet in LOGAN OHIO a young woman gets TASED AND ARRESTED for not wearing a mask. At 1:37 in the arresting officer takes his mask off (perhaps to smell the burnt flesh from the taser he would use), and the second responding officer has no mask. Outrageous, and this will continue getting worse if all good people let it.

No, the school district cannot require a dress code. I don't know many males who would wear one.

If all the bleacher people would have removed their masks then what would the tyrants have done. 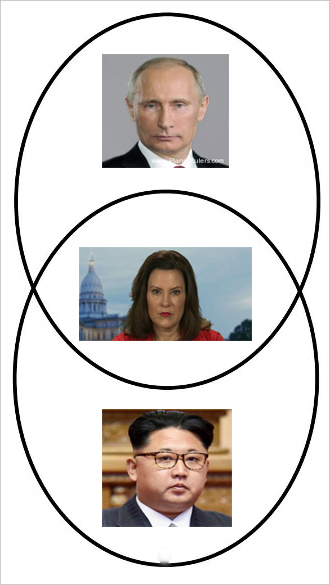 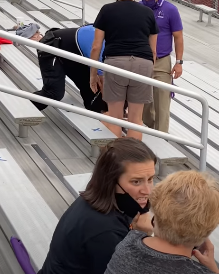 It would be an interesting video if he did, but if he does, I bet it malfunctions.

If I were the guy in the foreground or this woman down there taking her mask partially off to show her friend her concern, I would have been intervening in less than a minute.  Of course, I wouldn't be wearing a mask either, at that point claiming a medical exemption, and telling the officer this young woman had one too but was embarrassed about it.  My intervention would have likely saved the local taxpayers a couple hundred thousand or more-- or got us both arrested and then the cost would double.

Does the cop have a camera on?

Can the school district require a dress dress code for games?  Certainly

Can I bring some women in string bikinis to the game?  Not if I see them first.

Could a mask be considered dress code?  Some schools have that in their dress code for 2020-2021.

Better arguments, but they still fall short of the law strictly requiring masks.  The latest Ohio EO has several exceptions for people not to wear a mask, the OHSAA setting the rules for this too, (see p.11 & 20):   "The following are acceptable reasons to not wear a mask as outlined by the Ohio Department of
Health:  ○ Facial coverings are not advisable for health reasons."

You will find the 2020-2021 Student Handbook does not have anything requiring masks in it, feel free to look. Nothing regarding masks is in their website regarding their own policy, meaning that the guidelines for this event came from the OHSAA, and I have read further sources indicating she was questioned about whether there was a reason she was not wearing a mask.  The SRO was out of line in accosting her and desecrating her health further by electrifying her.

Can the school district require a dress dress code for games?  can I bring some women in string bikinis to the game?  Could a mask be considered dress code?

Anx, you should change your name to "Funny Guy" because you're a laugh riot.  The internet is a vast array of information should you decide to look for it.  I know firsthand that trespassing on public property differs from private property.  Back in 2011, I was sent a letter of trespass for the city hall/LPD complex and a private residence I had never been to before.  The groundless ban from city hall prevented me from going to city meetings, voting, and doing a host of other things.  My attorney filed a federal lawsuit, I became $15K richer because of this indiscretion by the city council and almost all other city hallers, and had the ban lifted and the 'law' amended.  I'm still banned from the private residence, but I hear that a grotesque ogress lives there anyway so why would I want to be there anyhow?

Police do not have absolute authority to control public spaces w/o the law backing that up, that line of reasoning shows why you do not give any credit to the ejected girl who was not violating any law, especially trespassing, which does differ quite a lot when you're dealing with public and private property.  And my skin is thin for people that get tossed out of public spaces without a reason.

BTW, I only have one other identity here on the Ludington Torch, and that is Haiku Confucius, for when I feel poetic, or when I'm testing new features out for the membership.

How is this different from the breakwater and getting a trespassing ticket there?  I think the same concept applies.  While you are able to take risks and put your own life in danger, you are not allowed to put others in danger because of your "freedoms."  The breakwater may seem like a personal decision and harmless to others until a rescuer is hurt trying to help them because they did not heed the warnings. The people that went to the event knew what the rules were.  She was the only one that thought she was above the rules put in place.  This is a classic Karen situation.  The other people went there expecting others to be wearing a mask and have a right to not be put in danger because one person wants to defy the stated rules.   She violated the rules of this event and resisted arrest its plain and simple. Think of it as a dress code.  In the history of the US how many kids have been refused entry into Prom due to a dress code violation? Its public property and by your argument not allowed.

XLFD your argument does not hold water.  Yes it is a "public" place but that means absolutely nothing when applied in a trespassing situation.  Police are able to tell you to leave just about anywhere.  Police have the absolute authority to control public spaces.   So you are saying nobody has control over the behavior on this "public" land?  Please help me out here.  I am pretty sure there are plenty of homeless people that have trespassed on public land and been arrested for it.

I also have no need to delete my posts, hide my IP address (as falsely accused by your hero), or use multiple accounts to talk to myself or garner false support for my arguments nobody cares about.

How does this have anything to do with Whitmer?  You are so deranged and obsessed you have to bring her into all aspects of your life.  This happened in Logan, Ohio.   The girl was also likely not a minor as reported in the original post being that her name was released and she has a large trashy tattoo on her leg.

I am confused.  Are you saying property rights do not exist outdoors?  That would mean anyone can come on your property all masked up and there is nothing you or law enforcement can do about it?   Would you be supporting "tyranny" for setting rules and enforcing them on property you are responsible for?   I did not see anyone 400lbs either.  I seen a cop that was about was maybe pushing 300lbs do his job and now because its a white women and black cop the script is flipped.  Does MAGA support police or not?  All police or just white police?

The person responsible for this site files a lot of lawsuits against the city for wrong doing they bring on themselves.  How hard is it to understand that there are people using the same methods and techniques he does in a malicious greedy manner. As a taxpayer do you want to be paying for a BLM (leftist, Obama loving, Whitmer loving, Antifa, government assistance using)  protester's medical expenses because no prevention measures were taken and the school district got sued?   I am sure I already know the answer.

Since Anxious Guy might delete his very incorrect post here's what he offered:  "I used to think this site produced truth and wanted the truth to be known. Here is the non-political story!!  In this event the women refused to where a mask on private property.  Someone within the school district requested she wear a mask or leave the premises.  She refused to wear a mask and was then told to leave   When she refused to leave, she informed she was trespassing, and told she was being arrested.  She resisted arrest and was zapped.  I could see one group of people feeling like she was lucky she just got zapped and not shot for refusal to "show' her hands.     This arrest did have to do with a mask and refusal to wear one but she had a choice and she made it.  She could have avoided this by simply following the rules put in place to allow these kids to have some fun.  Its people exactly like her that have made it hard for decisions to be made and kept the season in jeopardy to begin with."

Producing truth is complemented by correcting untruths.  You are incorrect in your line of thinking.  Here's a link to the Logan-Hocking School District-- guess what?  Their football field "the Chief" is owned by the school which is a public school.  How was she declared trespassing on public property, except by a misapplication of the law by Officer Brutus and his unmasked partner?

This young woman is outside social distancing with others, other than her family, and Ohio rules (which prevail in a school district, unless otherwise enhanced by them lawfully):   "All Ohioans are now required to wear a face mask or covering in indoor public spaces and outdoors when unable to maintain a 6-foot distance from others. There are exceptions for children under 10, those with medical conditions that would preclude the wearing of a mask, and in other situations where wearing a mask would be unfeasible." Read the full public health order pertaining to Level 3 counties here, and an addendum to the face mask mandate here.

This is nothing more than police brutality and ignorance of the law by both officers.