The Ludington Torch has argued for police reform over the last dozen years, in one form or another.  But even in our most libertarian, anti-statist phases, we have never argued to 'defund the police' which a small minority (under 20%) of people from both extremes seem to back.

It is nigh impossible to reform police to any degree because of the existence of police unions. Liberals and conservatives alike have identified police unions as a barrier to positive, meaningful reform after the death of George Floyd. “The unions, at least in New York City, outright just protect, protect, protect the cops,” retired NYPD commander Corey Pegues wrote in his memoir, Once a Cop. “It’s a blanket system of covering up police officers.”

Police unions work like any other public sector union.  In summary, a public entity creates a monopoly (in this case, a police force). The monopoly forces taxpayers to fund those workers, whether they do a good job or not. The union then coerces workers to pay dues regardless of whether or not they want to.  Some of that money goes to defending poor work performance or inefficiencies, the rest of those dues  help fund political advocacy that perpetuates their monopoly and the union's influence. In other words, it's classical racketeering.

Private sector unions came into being organically in order to get workers better wages, reasonable hours and safer working conditions.  Public workers should be able to get favorable wages, hours, and conditions commensurate with their area through a fair political process from the public entity they serve.  Franklyn Delano Roosevelt was a fervent supporter of private unions, as have the vast majority prominent Democratic officeholders since, but FDR in 1937 told the nation what the position of his administration on public unions was:

"All Government employees should realize that the process of collective bargaining, as usually understood, cannot be transplanted into the public service. It has its distinct and insurmountable limitations when applied to public personnel management. The very nature and purposes of government make it impossible for administrative officials to represent fully or to bind the employer in mutual discussions with government employee organizations. The employer is the whole people, who speak by means of laws enacted by their representatives in Congress. Accordingly, administrative officials and employees alike are governed and guided, and in many instances restricted, by laws which establish policies, procedures, or rules in personnel matters. Particularly, I want to emphasize my conviction that militant tactics have no place in the functions of any organization of government employees. Upon employees in the Federal service rests the obligation to serve the whole people, whose interests and welfare require orderliness and continuity in the conduct of government activities. This obligation is paramount. Since their own services have to do with the functioning of the Government, a strike of public employees manifests nothing less than an intent on their part to prevent or obstruct the operations of Government until their demands are satisfied. Such action, looking toward the paralysis of Government by those who have sworn to support it, is unthinkable and intolerable." 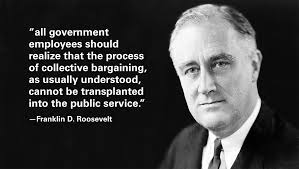 But like a virus, public sector unions, including police unions, started to organize and gain footholds  after Roosevelt's disclaimer.  If an actual attempt to defund the police were to be tried, the police unions would be front and center to defend the police, and do so with the zeal of somebody trying to save their career.  With a conservative-leaning Supreme Court, there may be some hope for reigning in public sector unions, as they did in 2018 with Janus v AFSCME, which disallowed a public union from collecting dues from non-members of the union.

If police unions were dissolved by legislation, it would be much easier for police management to get rid of the bad cops, like Minneapolis bad boy Derek Chauvin, who had multiple strikes against him in his career.  It would allow governments to set better standards and fair discipline for their police forces, and do so out in the open, not in some closed collective bargaining discussions where deals are made with little concern for the public's opinion.

Ideally, we could do this for all public sector unions, so that public workers can get fair wages and benefits that are appropriate for the region they serve and the position they hold.  Will this be difficult to achieve?  Anything worth it usually is.

Americans do not want to indirectly fund public organizations that undercut initiative and achievement to slide employees into safe, pre-determined slots regardless of ability or work ethic.  Retaining bad cops, bad teachers, bad firefighters, bad letter carriers, etc. does more harm than good overall and the costs of keeping the inefficient system the way it is has become prohibitive.

Dissolving the various police unions through legislation could be potentially a proposition desired by both parties, even if their reasoning differs, and lead to a high degree of reform in modern policing.

An incredible poignant piece X. While I am a believer in a functioning government which includes a police force similar in action as it is now, the idea of public sector unions has always bothered me. It should be the individual and their actions that determines their outcomes in life and their jobs, and not the protection of a system that prevents the more successful from improving their standing. Similar to FDR, I believe that Private Sector Unions can play a crucial role, in the public sector, employees are already in the limelight and thus do not need a union to bring their concerns to the light of day.

Excellent article X. I have never been in favor of public employee unions especially the most damaging union of all and that being the Teachers Unions. Add on the fact that students are being indoctrinated with leftist ideology and we have a brew of brain washing never experienced in America before.

Thanks, Epictetus, we try to stretch the bounds of poignancy here, at times to the point of being repoignant to some.

Police unions are an interesting political animal.  On the right, police are mostly revered and unions are mostly in disfavor; on the left it's the reverse.  So both political parties have some ambivalent feelings on the issue; thus only when the stars line up right, you may have some bipartisan movement against police and other public sector unions.

I don't see that alignment coming into play in the politically-charged environment of the campaigning season, nor does it seem to be a significant topic of discussion going on at the national level to cure the perceived problems.  Neither party is going to strongly go against police unions, because it will offend too many of their own party.  Next year, maybe.

Great video, Willy, short and to the point.  I agree that public teacher's unions are just as worthy (if not more) as police unions to be disbanded.  By September, public school teachers in Michigan will have been effectively idle for six months and during that time will be bringing in significantly more money than many of our areas full-time essential workers get for a full year's work.