If you're a long term follower of the Ludington Torch, you may likely know our origin story, but I will briefly summarize it here.  I was riding my bicycle the final mile of a forty mile trek out to Victory Township and back on August 25, 2008 when I cruised through a stop sign located on Loomis where it intersects William Street after slowing down and having made sure there was no traffic on William Street anywhere near.

A Ludington police officer, David Krause, driving his Tahoe a block south on William noticed my deceleration before and subsequent acceleration through the intersection.  He decided to conduct a traffic stop on me for not stopping at the stop sign, and one block away I was pulled over.  After asking me why he stopped me, and telling me I failed to stop at the stop sign, I let him know that it is much safer for a bicycle rider to roll through stop signs and of some of the problems they encounter when they don't.

I do not know whether that was enough to get me a ticket, but when he asked for my driver's license, I slapped my spandex shorts and admitted I didn't have one (and didn't need one), while trying unsuccessfully to not laugh at this portly policeman.  Officer Krause decided to write me a ticket as if I had drove a car through a stop sign (which would add points to my driver's license, up my insurance, and be a lot more than a general bicycle violation of $60).

I was irritated by his idiocy and told him I would keep riding my bicycle in the safe manner I always have, and he was free to follow me the rest of my way home and write me up even more tickets if he was so inclined to.  I eventually fought the ticket, LPD Chief Mark Barnett and the local district court fought back, and a dedicated Ludington firefighter became a diehard community activist fighting the deep set corruption in the local governments so that others would not suffer similar fates.  A year later, the Ludington Torch came into being.

Twelve years later, Barnett and Krause are gone, the extremely corrupt city manager, John Shay, is also gone, replaced with a more sensible one called Mitch Foster.  Foster is a bicycle rider himself, and gets a lot of ideas from a group called Strong Towns, he was even able to get their founder, an engineer called Chuck Marohn, to come to Ludington this winter and give inspirational and thoughtful advice in towncraft.

Strong Towns has a presence on Facebook and runs about five articles a week on various topics concerning towns.  Two days ago they ran an article about bicycling in a world made for cars called Stop Comparing Cycling and Driving Violations, which contained this helpful chart for converting the common cyclist violations (or perceived violations) into their motor vehicle equivalents. 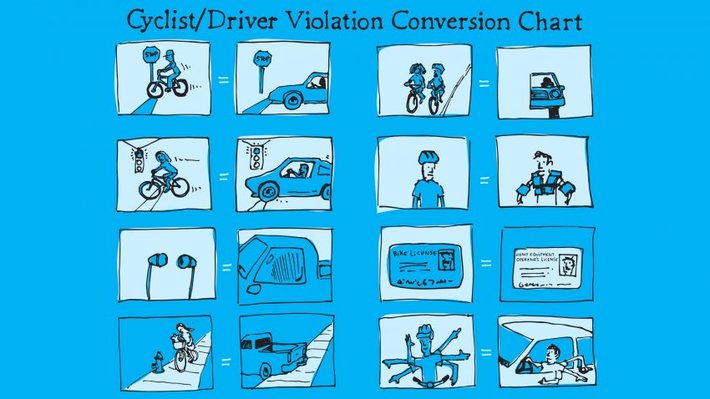 It continues:  Let’s get real: drivers never really come to a complete stop. The truth is cyclists typically roll stop signs at the same speed most motorists consider to be “stopping.” Meanwhile, a cyclist rolling a stop sign can typically bring a bike to a stop with two fingers on the brake lever in a matter of inches.

The article is mainly tongue-in-cheek, but if you ride for any length of time you will know that there is no purpose served as regards safety or traffic flow by a bicycle coming to a complete stop at a stop sign when there is no traffic coming, noting bicyclist can see, hear and feel traffic coming because of their intimacy with the road and slow rate of travel.  Stopping without reason is when you get hit from behind from a rolling stopper, overcome by a right turning car while you try to overcome inertia, or get hit by cross-traffic at an intersection because you're traveling ungodly slow through it.  And, as noted, you can stop on a dime whenever needed.

But that wasn't the only Strong Towns article that vindicated the points I would bring out at my 2008 bicycle traffic stop.  Three days before, Chuck Marohn himself advocated the position of ending all routine traffic stops.  One would believe this includes stopping bicyclists traveling safely down the street trying their best not to get killed by careless and distracted drivers encased in their steel cages.

In It's time to end the routine traffic stop, Marohn describes a friend who was stopped for rolling his car through a stop sign, he believed he hadn't.  Marohn would later talk with the police chief and found out he encouraged his officers to be aggressive with traffic stops, and 'fish for bigger things'-- bragging that he nailed some real bad people this way.

Marohn acknowledges that traffic stops are dangerous for all concerned, the statistics show that, and many of the problems existing that causes many of these stops are traffic engineering problems or ones that can be better enforced through technology.  He ends with the simple statement:  Let's end the traffic stop.

That may be overly optimistic and simplistic, we still would like to keep impaired drivers off the road, along with other drivers acting recklessly.  But let's consider some of the routine traffic stops in our area in recent times that worked out badly for those not actively disobeying traffic laws, a short list:

And let's not forget Chief Barnett through one of his officers using a false and dangerous traffic stop as a method for an unnamed high school student to pop a question about going to homecoming.  Almost exactly one year after this, Trooper Butterfield would be shot dead and the three people in the car stopped would have their lives forever affected all because of a 'routine' traffic stop.

If our city leadership takes the Strong Towns approach to heart, they would discourage our police from making 'routine' traffic stops and most definitely when it involves a bicyclist trying to do their best to survive in an automobile-centric universe.

Interesting article X. The only problem is that the police would have little to do if they didn't do their "routine traffic stops".  I would be curious to know just how much of their time is spent performing these stops. Also, are these stops a modern police tactic or did town sheriffs pull over horse wagons and buggies in the old days? I can just picture police way back in the past hiding behind a tree waiting for unsuspecting drunk buggy drivers. 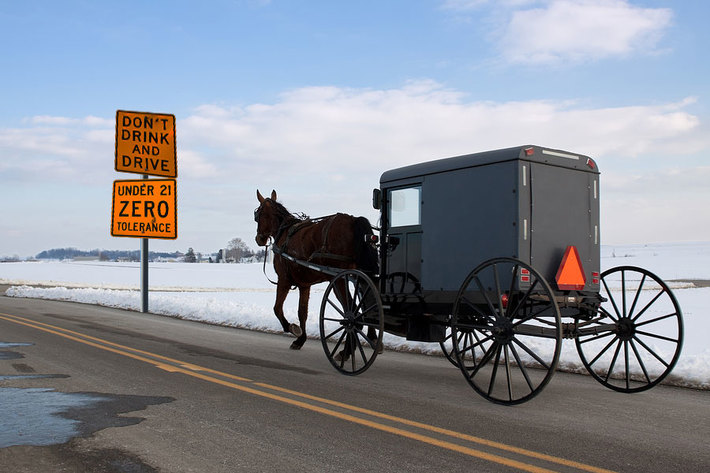 It's still interesting to look at, what with the LPD recently spotlighting a 400+ page manual of standard operating procedures, and the new chief adopting a couple of new protocols over the last two meetings (police lines at July 13th, recording interactions scheduled for July 27th).

Police now have the capability to use a database to check on whether your car is insured, I have been told by a couple of reliable sources that this is what precipitates several stops in the county (think I triggered this myself when I had been tardy with my insurance).  Sometimes these databases are not up to date or wary of every single insurance carrier, so you may be stopped (possibly under some other pretense) and get an expensive ticket.

What if, they obviated the need for a stop by taking a time-stamped photo of your vehicle on the road and sent you a citation by mail whereby you would have to offer proof to the court that you were indeed insured (and or registered) on the day in question?  Likewise, fix-it tickets could be sent out to those with noisy mufflers, non-functional lights, etc., so once they get noticed for it again within a year they would get officially cited.  If they catch other minor violations on video, they could likewise cite you without stopping and send you a link to your bad-driving video.  There would still be plenty of non-routine traffic stops permissible, but such a policy could reduce them significantly.

Doing things this way could make it safer for the police (and the drivers) and offer better protection for the Fourth Amendment rights of all of those in the car stopped.  As noted in Marohn's article, some PDs are using traffic stops to try and get you for bigger things.

The computer has been a boon to efficiency but has become a threat to privacy and personal freedom. People willingly give up their personal information without batting an eye and now each one of us has a large cache of our personal lives and information ready for the taking by anyone who has a computer and the knowledge of how to access that information. Whether their intentions are evil or for good, this situation  does not bode well for a free society. I'm afraid we have digitally screwed ourselves.