Ludington school administrators have been trying very hard to choreograph a regular school board meeting so that the board members can sit back, pass whatever comes before them without arguments betwixt themselves, and review positive presentations that affirm that they are doing a really, really, really, great job and the district is running perfectly.   That ideal meeting never seems to come to pass, however, since they continually make or support bad policy that does not improve the public school or the parents and students it supposedly serves.

The May 16 meeting of the school board (minus Mike Nagle, who was absent) featured not only two positive presentations, but the first realization by the school that their sinking fund was renewed for another ten years.  Additionally, the action items to be considered appeared to be non-controversial, including a vote by the board to effectively give their blessing to a trip to continental Europe (France) by Susan Shoup and up to a dozen members of her French class.

The thirteen action items were indeed, quickly discussed and routinely passed, with only one eliciting any sort of angst.  Board Member Scott Foster wondered how their consultant could have failed so miserably with traffic studies at the new elementary, dropping the ball and making a $124,000 expenditure on a turn lane approaching the Bryant entrance to eastbound traffic.  Foster often appears to be the one member who doesn't totally believe the myth of the board's infallibility and unaccountability. 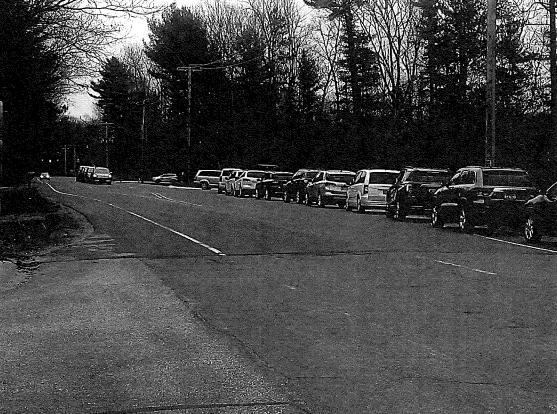 But at least one member of the audience also had an issue with the board dropping the ball, he would be the only one speaking in the public comment portion.  Yet before that happened there was a presentation given by Ludington's Robotics team, the O-bots.  Four girls then five guys from the high school team, and their mentors told the board what the program meant for them and how it opened doors for them.  I was actually hoping to see some of their work in action, but robots were not part of the program this evening.

The two high school administrators (Mesyar, Forsberg) then offered a short presentation featuring Julia Haveman who is a freshman that became a Business Professionals of America National Champion when competing at their meeting in Dallas.  She cajoled the board with what she and her fellow students were doing to make the area better (such as through Movies in the Park, luminaries, etc.).  It was then my turn to ground the board back to reality by relating what happened at the prior meeting and how it showed a pattern of inconsistency with the board.

XLFD:  "I'm shocked, shocked that the school board adopted three different policies in getting rid of their surplus elementary schools.  Early last year, Lakeview had a qualified bid for the property from a local home building company, Gibson's, for 25% over what the property's value was, much higher than other bids.  They denied that bid over multiple meetings due to political considerations that should have never entered into the calculus, then sold it to a person on the city's planning commission after they were allowed to elevate their bid to the same as Gibson's.

If that wasn't corrupt enough, this board approved the sale of Foster School, whose property was assessed at $240,000 to an unproven, freshly-created LLC for the price of $20,000, 1/12th of its value.  They took this controversial tack not over the course of a half dozen meetings, like they did with Lakeview, but over the course of one meeting without sharing anything about the transaction and its numbers with the district's taxpayers beforehand, nor have they given any credible reason for why they sold it for a 91.5% loss of value since.  Foster School is structurally sound and could have been the next community center, the next senior center, or even the next private or charter school to offer area parents more education choices, but the school chose to sell it to a developer to create more missing middle housing units in Ludington, a city that lost 5% of its population over the course of the last decade.

It remains to be seen whether this developer after making this secret deal to steal that school, will come back for more from the Ludington taxpayer and get unwarranted tax breaks and subsidies for decades from the City's newly created Brownfield Redevelopment Authority for the purposeless construction, but it's a damn good bet they will.  [I briefly apologized at this point to the O-bot team that decided to stay for the rest of the meeting for the language-- though I'm sure they have heard worse in school]

Finally, at our last meeting, the board took the highest of the two submitted bids for PM Elementary which was 15% over the assessed value of the property.  That's good, but the losing bidder attended and suggested that he was willing to put a written offer on the table that was 150% over the assessed value, a potential profit ten times the other bid.  Rather than consider the merits of the new offer placed on the table and the potential windfall it would give the district, the board ignored the offer.  If this board was a realtor, would you ever be hired again if you turned down a potential, qualified $250,000 offer on your client's property and accepted only $115,000 for it?  This board is made up of smart people, but they are certainly one wasteful, inconsistent group when they gather together to get rid of property." [END comment]

Having about a year of school board meetings under my belt, I expected the board to totally ignore the painful reminder of their past failures which have never been fully explained to the public as to how all three property transactions actually follow their written policies (which they don't).  It did suffice to ruin the board attempt to earn a perfect ten in their mental gymnastics routine, however.

The superintendent got the meeting back on the good side of the tracks again by running the Soaring Oriole Award video where Martha Hamilton, a secretary in the athletics department, received the monthly honor.  The board unanimously performed the following:

-- approved a tentative agreement with LESPA (district employees) regarding compensation

-- approved a sprinkler contract for two fields worth about $22,000 altogether

-- approved a request from Shoreline Cycling Club to hold their Singletrack Showdown in the school forest, they additionally allowed them to start and finish at the new elementary

-- approved five new women teachers, three in the elementary and two in the high school

-- approved the turn lane aforementioned into the elementary off Bryant, to be paid with the sinking fund budget

Thanks X for the report on the school board meeting. I was wondering if you know what the " school of choice reception for the 2022/2023 school year without limitations" means or what it is all about.?

That meant the board approved that LASD will receive 'school of choice' requests for next school year, and not set an upper limit on how many they will accept.  Under section 105 of the state school code, districts can accept students who live in other school districts within the same intermediate education school district.  Unless I'm mistaken, that includes the various school districts in Lake, Oceana and Mason Counties, such as Baldwin, Hart, Pentwater, Walkerville, MCE, G2SA, and MCC.

Thanks X. LASD schools are a long way from neighboring school districts. It's possible that some parents who live near the LASD borders might change but only if it is not a long distance to travel, especially in the winter.  Scottville would probably be the district that most of the transfers would come from. Here's an interesting statistic. When the $101,000,000 school bond was past, it averaged out to approximately $48,000 per student. Not including interest on the loan, sinking funds, etc.