A couple weeks ago, Michigan-based Bridge Magazine published an article titled:  "Michigan private school enrollment spikes amid discontent over pandemic rules".  It detailed how private, charter and parochial schools that bucked some of the crazier trends during the pandemic actually prospered as disaffected parents withdrew their children from public schools that almost universally embraced the crazy.  It notes:

"Discontent over pandemic rules and virtual learning has prompted tens of thousands of parents to pull their children from public schools in Michigan, and many have stuck with the decision even as COVID-19 fades... Researchers from U-M and Boston University found that parents were more likely to choose private schools in areas where districts held classes online..."

The article continues by looking at the rise in homeschooling and some of these private schools, among these was one in Ludington:

"Jan Bigalke, principal of the Ludington Area Catholic School, said parents — like education experts — realized that the youngest students need a teacher and not a computer screen.

“They need to have an adult sitting with them,” she said.

As the three public school districts in Mason County lost enrollment, Bigalke’s school gained. Not big numbers — a couple dozen — but it reversed a downward trend. And most have stayed with the school, where tuition for parish members is just over $3,300 a year.

“The biggest thing is we were in-person the entire year,” said Bigalke."

The principal is being quite modest, the well-established LAC had an enrollment of about 80 children in 2020 when Bigalke took over, a gain of a couple dozen would be a 30% increase in enrollment, quite significant considering. 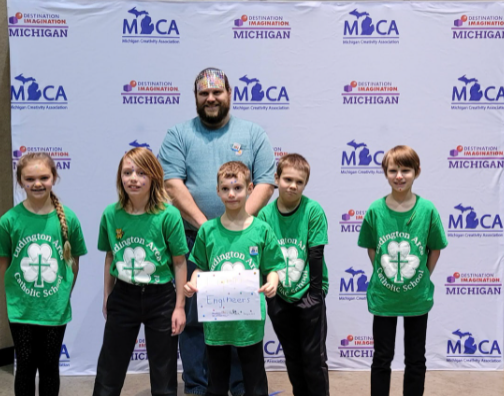 This Saturday, students from Ludington Area Catholic School participated in the Michigan Destination Imagination in Lansing.  This was their first year in the program.  LAC's team placed 1st and are the Destination Imagination State Champions for the elementary division/engineering challenge. Next up is the Global Finals in Kansas City, Missouri where teams from around the world gather to compete.

In DI competition, students work together in teams to solve open-ended STEAM challenges designed to teach the creative process.  The creative process is a step-by-step approach that helps students better understand problems and ask better questions, come up with solutions, learn from failure, and celebrate their achievements. Did Ludington Area Catholic Schools have a distinct advantage over many of their public school competitors throughout the state when they chose not to abandon in-person learning and not to mandate masks over the last two school years?  Or did they maybe  inherit some of the brighter young people in the local area among those two dozen that swelled their ranks over the last two school years?  Did the lack of strict control methods used at other schools help them foster their creativity?

Whatever the case, let's congratulate these young creative minds that have qualified for the Global Finals for Destination Imagination and wish them the best results in Kansas City.

I'm happy for LAC school but not so sure about the MDI affiliation. Destination Imagination (DI) is a global educational nonprofit. Odd that DI was founded in 1999 when Agenda 21 was making inroads into American society. In a short 23 years DI has  grown to include over 38,000 volunteers in 27 countries. I wonder how it got so big so fast.  Any organization, especially one that deals with kids that talks about "global" education, innovation or anything connected to globalization raises the hair on the back of my neck. The same leftist buzz words appear in their literature. Words such as equity, diversity, global and inclusion.  Our education system must concentrate on local and American issues first.  X, do you know what the MCA stands for in the background of the picture you posted?  Sorry to be to such a pessimist but if I've learned anything it's that the Left is always on the move.

I honestly don't blame you for wanting to know more information, considering all of the funky things we hear about happening in schools nowadays and how many districts have embraced some of the disturbing parts of progressivism and globalism.  MCA stands for the non-profit Michigan Creativity Association which sponsors DI and some other programs.  If you look through the link to their site, there doesn't seem to be too many buzzwords, and when you look at the participants in the DI program, you see a fair bit of private, parochial and even consolidated home schools-- ones you wouldn't expect to engage in a program that was secular or progressive.

I would welcome input from anybody who participates in the program to get a better understanding of what it all entails.