Michael's Off the Avenue

Ludington lost a signature downtown building on the SE corner of Ludington Avenue and Rath Avenue today, demolished in order to make way for a new restaurant facility.  The building which originally was erected as Seeba's Buffet a little over a century ago has served Ludington as a dining facility in one form or another over the last 100 years, lastly serving as Michael's Bar & Grille from 1994 before recently closing. Dr. Andrew Riemer has purchased the property and has gotten approval from city hall to demolish and re-erect a building that has an easement to re-construct a sidewalk overhang on Rath Avenue.  He plans on not changing the use and will utilize two levels for upscale food and bar services. 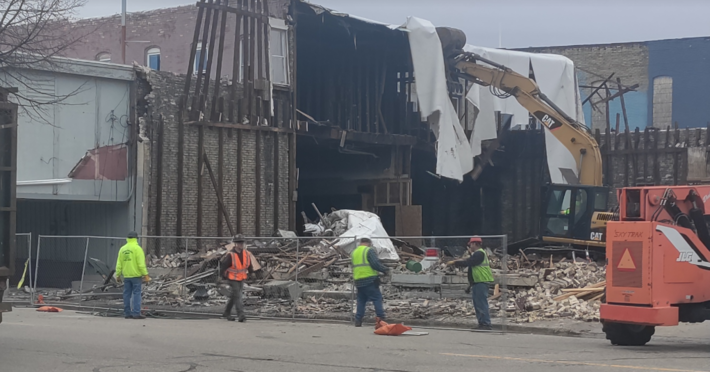 Demolition team members closed Ludington Avenue sidewalks, the alley behind the building, and the 100 block of South Rath in order to carry out the procedure.  Methodically they started taking it down from the back of it, where large timbers and 100-year-old bricks were strewn about. 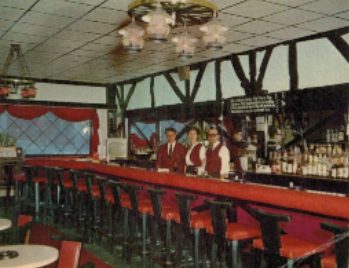 It might be just my computer but i posted a comment last night about the new construction and it disappeared. So I'll repost.

It's a very positive thing that Dr. Riemer is investing in the Ludington area. He's probably not holding his hand out for Government assistance so that's a double positive. I hope his investments do well. His Stix project was a monster refurbishment and is a terrific asset to the area. Thanks Doc.

I am beginning to wonder if I inadvertently gave the impression in the article that I was rueful that the building was being torn down and would likely be replaced with an architecturally sound building much like what Riemer did with the Stix project.  I am definitely looking forward to the redo and expect Dr. Riemer to have a strong attention to detail, so if it does look out of place in downtown Ludington it would be in a 'good way'.

But whenever the old is torn down, we should always take a moment or two to look at what it once was and celebrate that existence one last time in the rubble.

Pictures from earlier this afternoon: 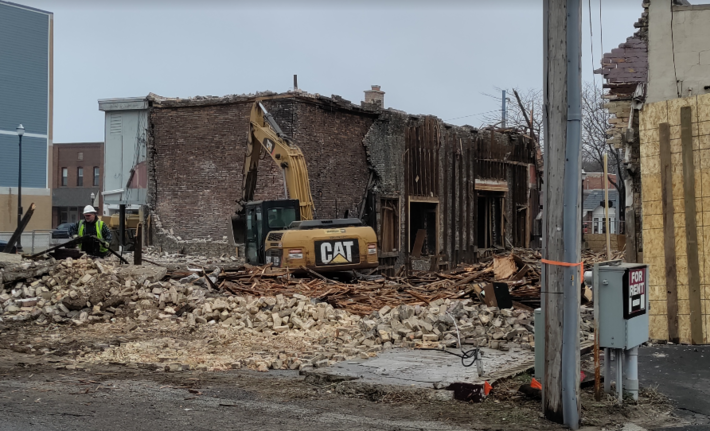 X. I forgot to mention how informing this article is. The history of the building you give and the photos you took and posted are another excellent example of good journalism. Thanks. It is sad that in so many cases history must be swept aside for new beginnings. At least the Doctor did not build low income housing using our tax dollars.