This last Monday, the Corunna (a city located between Owosso and Flint) City Council voted unanimously to fire their police chief.  As we regularly see in Mason County, city councils typically go out of their way to back their police chief whenever possible, so what was it that led to this termination?  Simply put, Chief Nick Chiros showed no respect for his oath of office and abused his authority in arresting a man for recording an incident from a very safe distance away. Rather than describe in detail the incident, the video below explains it somewhat.  It leads off with alternative journalist Mathew Wrosch getting harassed by the police chief, then segues into the full incident.  Wrosch has arrived at a scene on Friday, November 13th where a suicidal subject is poised to jump off an electrical tower.  Two state police troopers 'greet' Wrosch first and they arrive at a compromise of where he can film at.  A few minutes later, Chief Chiros comes over and asserts his authority (warning:  this is the unedited version, the chief uses some strong language):

Wrosch would later admit:  “I zoomed in all the way on my camera and I could barely see the guy on the tower.  It was a little speck. It wasn’t about catching him. It was about the police response.  I was locked up for 22 hours in the county jail. They refused to press any charges on me. I was released that Saturday morning at around 10-10:30 am.  I definitely did not want to be in the limelight so to speak, but this is all about civil rights.  It’s not about me. It’s not about one person. It’s about everyone’s rights." 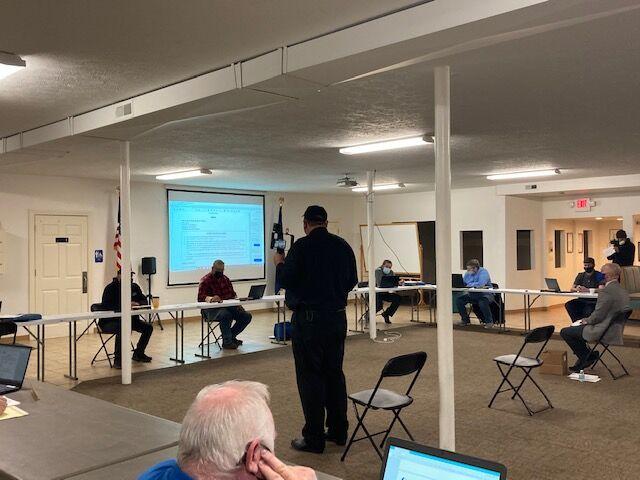 Even if you are a firm believer in 'Blue Lives Matter', you should admit that Chief Nick Chiros response, and how it differed from the troopers' response, should leave you wondering whether he meant what he said and why he said it the way he did.  Weeding out these types of characters from the police should be a goal; all officers should have a respect for the laws they enforce and for the rights of the people they try to enforce those laws on.  Those who fail to do so, should find another line of work.

I have to agree with Chief Chiros. First, this situation did not take place on public land. It was on land controlled/owned/leased by an electrical utility company and those towers and land are most likely posted "no trespassing" so the videographer was likely there illegally. The police were trying to talk the man down and the person on the tower may well have jumped just to get more attention if he knew he was being recordered. This was not about free speech but about following the law. When the Chief made his comments I would bet he thought the camera was turned off.

The Chief had every right to ask the person with the video camera to leave. This was his jurisdiction and his responsibility. And he was right, it was an active crime scene.

In my opinion the CIty Council did a knee jerk response without thinking this thru. I wonder if they consulted the City attorney before they acted?

We all get mad and say things we regret and most likely this was the case with the Chief.

I appreciate you taking the road less travelled by defending the police chief in this situation, yet I respectfully disagree.  Utility towers are placed on easements through public and private land, they generally extend 50-200 ft from the footprint and so it doesn't appear that the cameraman was in the easement and was on city (public) property according to both players.  Trespassing charges were not warranted.

In any police encounter, even a sensitive one like this, accountability should be top priority.  Too often we have seen or heard of police arriving at a report of a suicidal subject and they botch the intervention, perhaps even killing the person.  I am inclined to believe Wrosch, who is a champion of accountability, at his word that he was there to monitor the police response-- urban jumper situations are routinely covered by news media without any backlash as long as they respect the privacy of those concerned.

This incident went viral, and yet Wrosch hasn't emphasized the response to the subject, but instead the response of the troopers and then ex-Chief Chiros.  Chiros did not have the power to ask Wrosch to leave without any reason, threaten him with an arrest for trespassing that never happened, nor arrest him w/o charge.  Yet, what was his downfall was his angry statements in utter contempt of a person's rights.  Everyone can lose their temper, but Chiros let this man sit in jail for a day and put the City of Corunna in legal jeopardy by his loss of control and sanity.

I agree with much of your thinking but the fact is the man was standing directly under the power lines and was leaning against an electrical power pole [by his own admission] while making his video. The link you posted concerns encroachment by land owners adjacent to power lines, not about trespassing. The Chief was definitely out of line when it comes to failing to uphold the Constitution but he appeared to be more intent on the critical situation of a potential suicide rather than the video maker's rights.

It's quite possible that the metal box he was standing by was part of the easement, but even if it was, the easement was across public land and there appears to be no signage for trespassing.  The link was just to show widths of the right-of way footprints of power lines, which typically is 100 ft in rural settings.

It is also quite possible that the chief had the potential suicide at the forefront of his mind, but when you're at the 'chief' level you should be smart enough to compartmentalize the two and not unwisely escalate a situation.