Can you imagine a social studies teacher back in the summer of 2012 saying the following on social media and being fired for it?

"I'm done being silent.  Barack Obama is our president."

Doesn't sound all that controversial at all, in fact, it would have seemed like part of a lesson plan, because Obama was the president, and that fact was incontrovertible.  Fast forward to the present, a Walled Lake, MI social studies teacher, otherwise known for being a well-respected, fair and impartial teacher of history and political science, says the same of the current president and gets summarily booted from his job. 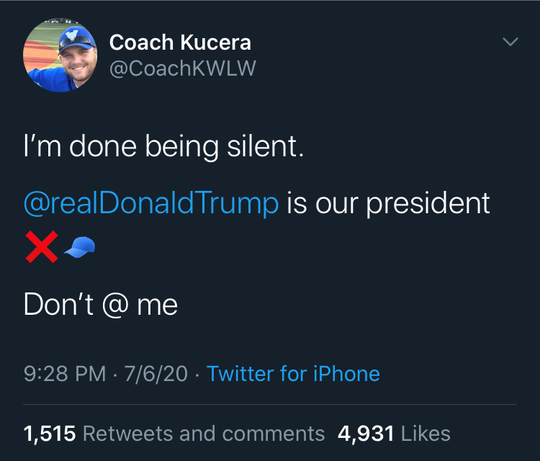 The original article from the Washington Free Beacon admittedly looks at the issue from his perspective, since the school district and superintendent would not respond for a comment.

Varsity baseball coach and social studies teacher Justin Kucera said Walled Lake school district officials hauled him into a closed Zoom meeting after he indicated his support for President Trump's speech to reopen schools. The Walled Lake Western principal and district superintendent gave him an ultimatum: be fired or resign.

"I was required to meet with [human resources], the superintendent, and my principal [on July 10]. They initially took my statement on why I tweeted those tweets [on July 6th] and they told me they would have a decision about my future employment in the upcoming days. When they completed the meeting, I was told [at a subsequent Zoom meeting] I had the option to either be fired or resign." Kucera said.  When Kucera said he wouldn't resign, he was told his last day was July 17.

A subsequent article by the Detroit News notes that he also tweeted "SCHOOLS MUST OPEN IN THE FALL!!!" and a responsive tweet saying "Liberals suck, man".  Kucera affirmed his belief that schools should reopen in the fall and that he meant his tweet about Trump being president to be "unifying", while the "liberals" tweet was meant sarcastically and was deleted a few hours after posting.  "I think we should be rooting for [Trump] to succeed because if the president succeeds we all succeed."

Kucera said he was told by the union that the tweets could be construed as impeding the business of the school, which would be grounds for firing, especially considering the school's title was listed on his Twitter page.  But he noted that other teachers have tweeted negative opinions against Trump and haven't received the same censure.  "It’s the equivalent of me sticking a Donald Trump sign in my yard," Kucera said of his tweets.

The Oakland County school district denied Kucera's story, saying "no disciplinary action was taken as a result of any support of President Trump." But the district declined more specific comment, citing confidentiality surrounding personnel matters.  They issued the following statement:

"As a matter of policy and practice, Walled Lake Schools does not comment on current and/or former employees as it relates to specific personnel issues.

These are difficult times in our community and across our country. When issues arise there’s a temptation to view items through the lens of our fractured political discourse. Walled Lake encourages students and staff members to engage each other with mutual respect and civility.

We believe in the power of education and critical thinking. We believe vigorous community discussion, done with civility and mutual respect leads to productive and innovative outcomes. In the Walled Lake Schools’ educational setting, we encourage positive discourse and working together to make decisions that benefit our community."

In other words, disciplinary action was taken as a result of Kucera's support of President Trump and/or his desire of wanting schools to open in the fall.  Michigan's public education system is monolithically liberal, hopeful that the president will fail, desirous of schools to remain closed, and will purge all that do not believe the same.  They proved it here.

The administrators at Walled Lake schools that fired the teacher should be fired. These are the people who are ruining our schools and indoctrinating the kids with B.S. and lies. The sooner these schools are cleaned out of the leftists, Marxists teachers and administrations the sooner we can get back to teaching the children the truth. Kucera does not want to sue the school district but nothing is going to change unless he does. It's time to fight back. If Coach Kucera would be offered and given a job in a public school in our area (and he won't since the local public school boards cater to leftism even though the area is conservative), I would shift my kids to that school system if possible.  This guy wants to work for his money, that's why his union representatives don't want to work for him (that and the Trump tweet), and that's why Walled Lake wants to get rid of him.  If they don't want to open up in the fall to in-person learning, then 'defund public education' is my new mantra.

Teachers: convenience store operators and Walmart clerks were operating during the worst of the pandemic w/o any special protections and surviving just fine.  Now that it is in almost-complete remission and science says kids seem not to be transmitters of Covid-19, do the job you're paid to do instead of getting tons of money for staying at home and doing very, very little.

This is why I like Trump. Not only does he follow thru on his promises but he is the consummate idea man. In an article by Breitbart Trump was quoted as saying:

“If schools do not reopen, the funding should go to parents to send their child to public, private, charter, religious, or home school of their choice. The keyword being choice. If the school is closed, the money should follow the student.”

The president cited the statement from the American Academy of Pediatrics recommending that schools be reopened, warning of the dangers to children. He also noted that the National Education Association said that online learning was never an effective replacement for in-person learning.

Another outlet did a FOIA request to the Walled Lake School District and found some interesting data, while comparing it to another educator who had more incendiary views about conservatives and only got rewarded for it.

The only negative in Kucera's personal file was a time when he missed one class without notifying anybody, which seems to have become an incident of poor judgment.

“We determined that given Mr. Kucera had a previous incident of poor judgement and that he was still in his probationary period, this second demonstration of poor professional judgment in a relatively short period of time was sufficient grounds for termination,” Superintendent Gutman stated, another administrator noted in an E-mail:

“I stated that based on the disruption his Tweet had caused in the school community that he will be offered the chance to resign or we will move forward with termination.  If he resigns I would be willing to give him a neutral letter of recommendation, continue his health benefits throughout the end of August, and that I would not contest unemployment. If he chooses to be terminated then I would have to make different choices.”

Reminder:  this was for tweeting who the president was.  Walled Lake Schools suck.