The biggest casualty of the COVID-19 pandemic is the truth, but finishing a close second is modern science, especially as concerns medicine.  A disturbing trend in modern science is its politicization, where certain branches become too romantically involved with partisan researchers to have objective results as their output.  This explains why most of the research coming out of disciplines like social science and climatology often reads more like an op-ed piece in the New York Times, the grants the researchers receive largely come from those pushing a liberal agenda they want help in 'proving', even if the scientific process needs to be relaxed to do so.

While questions regarding objectivity of those sciences are widespread, there was still a large amount of trust in medicine as recent as 2016 with 84% of the public having a fair amount of confidence or better in medical scientists, outperforming all other disciplines (elected officials finishing dead last at 27%).  By the time 2020 mercifully ends, that figure is likely to drop dramatically, and here are some of the reasons why it should.

Almost everything predicted, modeled, assumed, and believed by leading medical experts early on have been proven wrong.  If you've been following the news, you might have noticed those changes over the last few months, if you haven't, the media and medical 'experts' you watch has likely ignored or downplayed those changes and aren't worth listening to.  Noticeably absent is any admission of being wrong, or any meaningful explanation of why things changed.  Senator (and doctor) Rand Paul has properly dressed down federal medical experts for their lack of humility and accuracy a couple of times, including just yesterday:

Also noticeably absent throughout this time is the diversity of opinions by doctors who dispute draconian public policies that have been implemented to treat a not-so-malign virus, and who are actively squelched by media and the CDC.  A major part of the scientific method is to come to an understanding of what the conclusions will be after looking at the data. 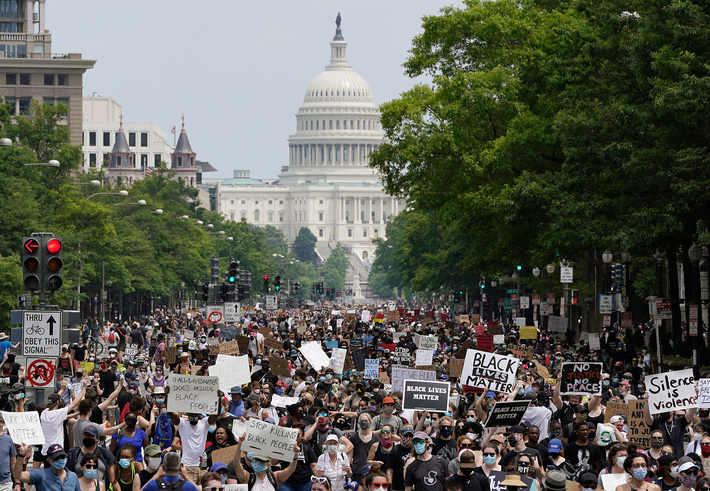 We see large 'protest' gatherings where there is none of the social distancing we've been told is so essential in stopping the spread of coronavirus.  Many, if not most, people are wearing cloth masks, but CDC and global health experts told us these were not helpful at all in the early part of the pandemic, even harmful for healthy people.  Once the politically-motivated CDC changed their policy, it has become vogue among some circles (particularly leftist protesters) to wear them to these events, even when the science and the box masks often come in, tells us that they have no effect on spread due to the small size of the virus being able to permeate the mask.

No distancing and ineffective protective equipment should mean through the accepted science that these gatherings could be potential breeding grounds for more cases of COVID-19, but medical scientists now tell us that isn't the case.  In "Black Lives Matter protests may have slowed overall spread of coronavirus in Denver and other cities, new study finds", we find that:

"We think that what’s going on is it’s the people who are not going to protest are staying away,” said Andrew Friedson, the CU-Denver professor who is one of the paper’s co-authors. “The overall effect for the entire city is more social distancing because people are avoiding the protests.”

The study is laughable in it's 'scientific conclusions', such as:

"It is possible that the result of suggestive lower spread of COVID-19 relative to non-protesting cities is due in part to characteristics of the protesters. For example, protest attendees may have mitigated the spread of COVID-19 via infection countermeasures such as wearing masks. The attendees may further be a selected subpopulation of younger individuals who if infected have less severe symptoms (Liao et al. 2020) and thus may never get tested and not show up in the official COVID-19 numbers."

Not surprisingly, the study did not look at the Tulsa Trump rally or the various protests made in Michigan and other places against state lockdowns of businesses.  Had they did so, the analysis is likely to have been much different because the study's author seems more interested in politics than actual science.

It reminds one of the letter signed by 1200 health professionals that urged protests not to be shut down from fear of the coronavirus.  This letter stated they do not condemn these gatherings as risky for COVID-19 transmission. Instead, they supported them as vital to the national public health and to the threatened health specifically of Black people in the United States.  It punctuated this seemingly unscientific analysis with:

"This should not be confused with a permissive stance on all gatherings, particularly protests against stay-home orders."

If you cannot separate the politics behind the science, you are probably accepting science on faith alone, and hence making it a secular religion.  Science demands critical thinking and skepticism to remain objective and meaningful.

who knows what to believe anymore. We have the lying press to thank for that. When all the lies about Trump were all finally proven wrong we find out certain news agencies had received Pulitzer Prizes for reporting those lies with never so much as an apology, let alone returning the worthless prize. Trusting biased/science or biased/fake news cannot bode well for the future of America.

It is all about stealing an election they cannot win and a test run for what they want socialism to look like. If everyone is afraid and dependent then they MUST have mail in voting right? That is their warped logic and the lazy scared GOP is crouching in fear. The globalist leftists must steal the election so Obama's shadow government can come out and reign supreme again.

It is all so obvious and ridiculous really.`All I can say is that we all must get everyone we know out to vote Republican In all elections in November. I predict that after the election it will go one of two ways.

2) Trump will lose ( God helps us NO) and Covid 1984 will be forgotten and we will all be at the edge of the Marxist Hell cliff for the next four years at least.

Stand up against the insanity locally and nationally with Patriotic courage. Ludington managed nicely to erase Independence Day here with little backlash. I find that more than disturbing...

Well said Lake Lady. The new leftist yard signs now include an effort to focus on science. We all know it refers to corrupt science but the left is to ignorant to understand that. The signs just keep getting nuttier and nuttier. Water is Life? Seriously?

How about they add "Abortion is murder " Just sayin...

Like the country song says...  " God is good, beer is great and people are CRAZY!"

I understand all of the twisted propaganda slogans but I don’t get the reference to water. I can only imagine there is another ideology battle, this one regarding water, that we haven’t heard about yet.

The water is life is a fairly recent movement most associated with the 2016 Standing Rock protests against an oil pipeline going through tribal territory in North Dakota.  It should be noted that this pipeline had been contentious for years in the Obama Administration, who effectively let it proceed,and it was only after Hillary lost the election that they did anything trying to stop it (which Trump immediately reversed).

The water is life is mostly an anti-oil development and transport movement, which is why it is fairly popular in Michigan due to the controversial Line 5 pipeline.  You may also have this movement pop-up when bottled water companies come in to extricate groundwater, which conservatives and conservationists might support too.

I have a hard time squaring the circle of "No Human is Illegal" and "Woman Rights are Human Rights".  The latter is pretty much saying abortion is a human right, an act which inarguably kills a human; so if no human is illegal why does one get killed by another human exercising a 'right'?

I don’t know how you do it X. I searched the internet and could not find any connection wth the water comment. Good job. The no human is illegal refers to open borders and illegal aliens. One thing nice about these stupid signs is that they give the curious something to search for on the net. Logical reasoning in your last paragraph.

They forgot to add my favorite to that sign, ''All animals are equal but some...''