Back in February when I made a FOIA request to Scottville to receive a electronic packet of the same information that they supply the city councilors at their meetings (or alternatively to offer such packets on their website, which was preferred), I had hoped that 1) more Scottville citizens would take interest at these meetings and be able to come in knowing what was actually going on and 2) that they would contain all the written information used by the commissioners to make their decisions.  After all, this has been what has happened in Ludington since 2012 after I inquired the same from them.

Scottville could still be on a slow learning curve but at the last couple of meetings, the clowncil seems to be getting supplementary or last-minute records that the public never sees.  The packet provided for this meeting contains the standard three items of an agenda, the last meeting's minutes, and a list of invoices to be paid.  The only additional record was a draft of a proposed chicken ordinance, scheduled for its first reading.

To be sure, the business at the meeting was light, but the two other action items on the agenda:  publishing a website services request for proposals and renewing the city attorney's contract, could have had the proposed RFP and contract in the packet.

The entertainment of the evening of July 19th at the Optimist Hall where the meeting took place came from without.  That is, it came from outside the hall.  With all of the doors and windows open for ventilation and to take advantage of the cool breeze, riffs from the nearby bandshell filtered in through the night, sometimes supplying the feel that the commissioners had orchestral backup.  The contestants for the upcoming 10/31 Celebration's beauty pageant were practicing for that August event. 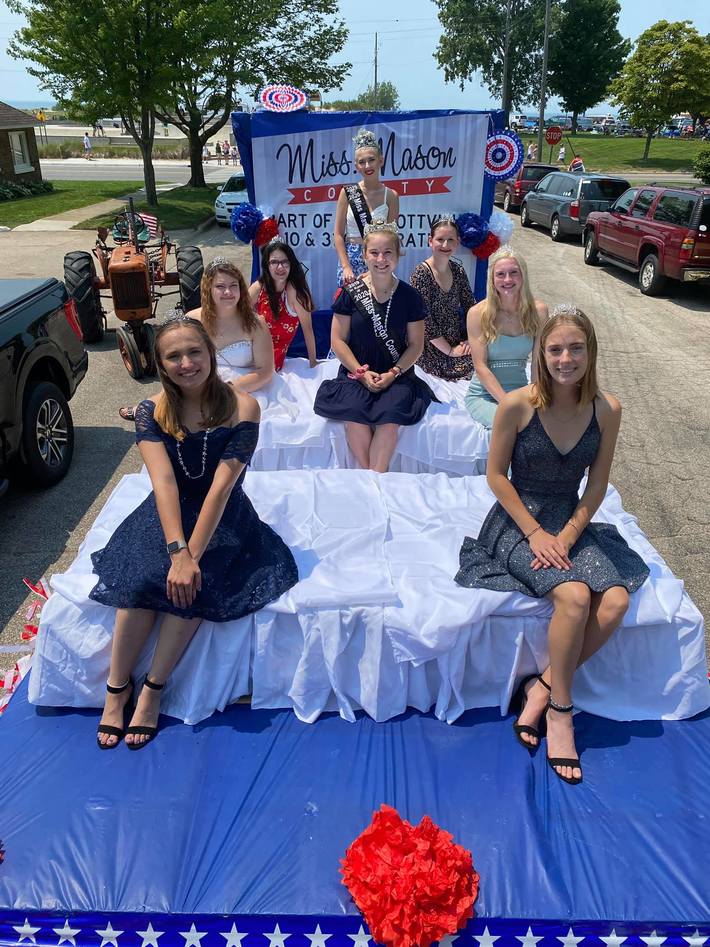 The choreography inside wasn't that well practiced.  The city clowncil deftly stepped through the agenda in order, once again ignoring the proper placement of the public comment period near the beginning of the meeting.  By the time they came to the 1oth item, the new business they had taken very little time and had said very little besides some updates on progress.

The chicken ordinance came up for its first look, and little was added to what is in the packet on it.  Rather than offer the public, eight of whom were in the audience, some insight into why the clowncil felt the ordinance was needed, what was wrong with the existing process that actually grants more oversight, and why a annual chicken permit was proposed and what it may cost, they just glanced at it and obliquely endorsed it among themselves.

Likewise, they left off saying much about why they plan on potentially changing the city's website.  City Clerk Kelse Lester made some observations that the present website is somehow limited and that an upgrade is needed, but it was short on specifics-- and one could objectively claim that the current city clerk needs to be upgraded because of its limited use and relatively high costs when you count all of the false overtime claims she doesn't qualify for.

They did get into slightly more specifics into the city attorney's contract which has a yearly base rate of $4000, but anybody who has looked at the invoices for Carlos Alvardo's services should be shocked when they see the $1742 charged by him in this packet and $2838 in June's packet.  That's $4580 in just two months where he can't blame me for FOIA requests.  Consider his $2748 in May, and $2266 in April, you see him approaching an actual $30,000 cost per year, well over twice what the prior city attorney charged in his worse years when he was working on a lot more.

Clowncilor Graham commended the attorney for doing things so expensively and incompetently as he has, but he used language that his services were inexpensive and adept.  “Carlos does a lot of work behind the scenes. He’s picked up a lot of work on his plate, and the fact that he’s doing it for the same price is pretty good for us."  The other bobbleheads followed his lead and kept the Chilean fee-chaser on at the same bargain rate of $4000.

A brief discussion with the Mason County Rural Fire Authority's representative whose negotiations with the City are currently on hold.  This led to the public comment period.  City resident Tarra Perez offered a few perceptive points regarding what she witnessed at the meeting.  She wondered about the need for it and why the City was charging a potentially high yearly rate when the citizens are already struggling from tough times.  She wondered also about the cost and the potential benefits of changing web services.  Her thoughts were likely novel to the city clowncil, who never seem to be concerned about costs to the taxpayers and how it would directly affect their livelihoods.

She had some common themes with my comment made just before the clowncil had their last say.

XLFD:  "The ineptitude of Scottville's current leadership never fails to impress me.  Consider the Chicken Ordinance introduced tonight.  It is slated to replace part of the Scottville Zoning ordinance, namely section 153.045.  Yet that section of law is not currently relating to the City's position on permitting and raising chickens in the city of Scottville.  That authority currently resides in section 91.16 of the city code, which is somewhat contradictory to what's in this proposed ordinance, and somewhat superior in flexibility and process.  The only thing that the proposed ordinance adds is restrictions to liberty and a yearly cost to the city for permits to raise chickens.

This commission has shown that it does not care about conserving or preserving the commonwealth of the citizens.  This is demonstrated by Scottville having the highest tax rates of any local government in Mason and all surrounding counties.  It's why water and sewer rates are through the roof.  But that's minor in scope when you consider that this commission allows embezzlement of those taxes and utility bills by feckless city officials who embezzle that money for their own selfish good.

It's a culture of corruption and you should be ashamed of trying to extort more from the citizens you supposedly serve but realistically just rob from, by charging a yearly fee from chicken owners.  Frankly, it's a chicken tax since the chicken permit owners get nothing from the city to show for their yearly tribute.  At least you guys were ashamed enough about this not to shock them with the fee you plan on charging for doing nothing other than allowing a citizen to exercise the right they currently have of raising chickens in the city freely.

I have some hard legal deadlines coming up regarding some of the outrages that city leaders have allowed to happen this year.  I will be bringing a process server and some heavy lawsuits to the next meeting, so I can serve the City of Scottville and those leaders that have broken the law.  Thanks for allowing me the opportunity to speak at this meeting."

I don't know whether the clowncilors considered the last threat as meritless, if they do, they don't know me very well.  One thing they didn't do in their last call was address the concerns over the chicken ordinance or the other concerns, some longstanding.  Instead they decided to do the same old song and dance where they are oblivious to the music playing around them.

If nothing else they could rename the City. 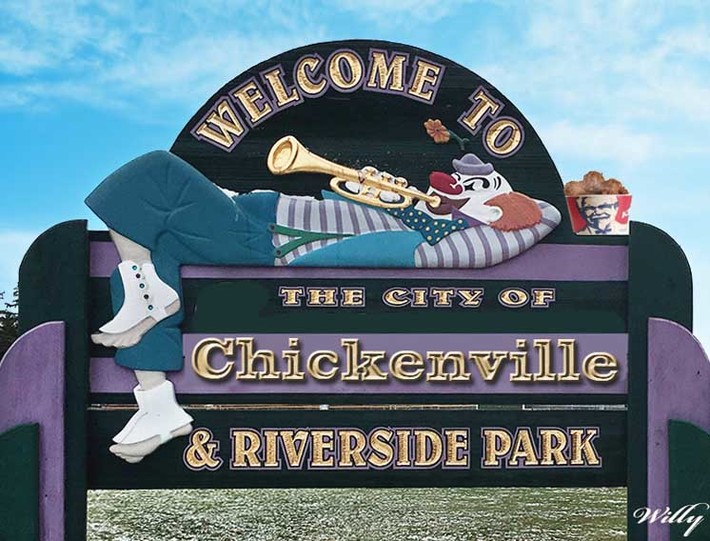 Good one Willy. Same old song and dance as Ludville for sure, and nothing ever changes for the better, and  things just get worse in tune and time. Scottville has sure slid downhill in recent years, and it appears it's going to continue and just get worse now without new leadership for the future.

One may associate the current Scottville leadership woes with the Aesop's Fable of the Bee and Jupiter:

A Bee made Jupiter a present of a pot of honey, which was so kindly taken that he bade her ask what she would, and it should be granted her. The Bee desired that wherever she should set her sting it might be mortal. Jupiter was loth to leave mankind at the mercy of a little spiteful insect, and was annoyed at the ill-nature of her wish. He therefore said that, while for his promise sake he would give her the power to harm, she must be careful how she used the power, for where she planted her sting she would leave it, and with it lose her life.

City officials continue to steal unabated from the people, they continue to ignore laws that pertain to them in the city charter and in acts meant to keep open their government (the FOIA and OMA).  They can mute me once at zoom meetings, they can mute me twice at zoom meetings, they can kick me out of a meeting when I'm sitting quietly and inert, but thy merely irritating sting of your rebukes, City of Scottville, will only lead to the demise of your evil character in the end.  Bee warned.