Sheriff Cole Explains Why Masks are Not a Requirement

As several Michigan sheriff's departments and police agencies have openly proclaimed that they will not be enforcing Governor Gretchen Whitmer's latest Executive Order 2020-147 which appears to be her fourth and strongest proclamation about wearing masks, our local sheriff has been silent on the topic since mid-April. 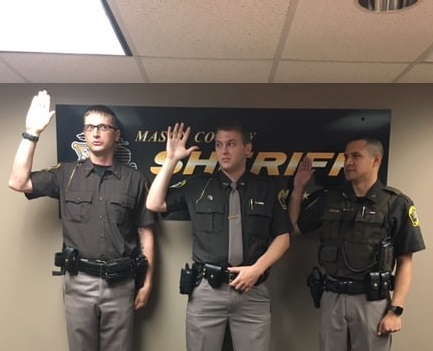 Sheriff Kim Cole gained some notoriety by being one of the original four Michigan sheriffs to issue a statement effectively saying they would not be strictly enforcing the governor's executive orders.  He was interviewed nationally, and locally by Katie Krieger  regarding why he felt it was necessary to do this; here was his interview with some excerpts immediately following from the sheriff's mouth:

4:45 in:  "What (Whitmer) is failing to connect is that these uniformed officers are going to these calls and being put in a position where there's an encroachment on a person's Constitutional rights."

6:40 in:  "But don't expect us to go write a person a ticket because they are over at their in-law's house playing pinochle at 8:00 at night.  That's a violation of the governor's orders, right?  We just need to use a little common sense."

9:25 in:  "We need to make sure we're doing the things to protect our citizens' rights while keeping them safe, and we got to find that line."

At that time, masks were not covered by an executive order, however, Cole urged people to follow CDC guidelines and wanted people to use common sense in wearing a mask to protect others, not necessarily to protect themselves.  The full statement by the four sheriffs follows, and is consistent with his views expressed in the interview: 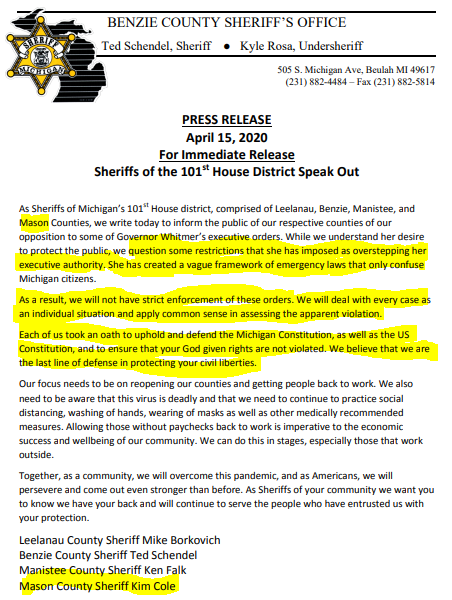 "Each of us took an oath to uphold and defend the Constitution as well as the US Constitution and to ensure that your God-given rights are not violated.  We believe we are the last line of defense in protecting your civil liberties"

Strong words that needed to be heard by a lot of people concerned about their rights being trampled on.  Perhaps this is why he has not needed to re-emphasize the point, we will analyze what this means after we look at what the state's response was, and why it was typical of their overreach.

Executive orders are generally drafted by attorneys hired by the executive branch to do such things and they typically write the orders as much as they can in legalese to make the EO look as official and binding as possible.  But in these orders they generally include several clauses that they need to add due to legal considerations, and EO 2020-147, that went into effect yesterday as the strongest of four EOs to address mask usage has such clauses therein.  Clause 6, in part:

Those guaranteed protections are otherwise known as your rights.  If this mask usage EO violates your rights in any way, and you want to preserve that right instead of give it away like most do, you have the right to not follow it.  And this latest mask usage policy does just that.

The First Amendment of the U.S. Constitution states:

“Congress shall make no law respecting an establishment of religion, or prohibiting the free exercise thereof; or abridging the freedom of speech, or of the press; or the right of the people peaceably to assemble, and to petition the Government for a redress of grievances.”

Now let us visit the Fifth Amendment to the U.S, Constitution:

“No person shall be deprived of life, liberty, or property, without due process of law; nor shall private property be taken for public use, without just compensation.”

The latest EO takes the liberty to not wear a mask in businesses for individuals, and takes the liberty away from businesses (who are legally 'people' in most cases) to determine their own business model.  Due process of law is not akin to saying "some executive branch lawyer wrote some binding rules to live by, and you will be fined $500 if you don't-- end of story".  No court of competent jurisdiction will ever fine you $500 for not wearing a face covering by edict of a poorly thought-out EO that goes against decades of scientific research that confirms healthy people wearing masks in community settings does more harm than good.

What should be happening with due process in our system is that the legislators should be immediately seeking injunctions against such unconstitutional orders and our courts should be immediately striking most of them down due to their lack of consideration for the rights of individuals and businesses.  She has already destroyed numerous business' and individual's lives and livelihoods by using the power of the state to call their job or business non-essential, rather than consider whether they can operate during a virus outbreak safely.   She has done this destruction without offering just compensation to all.  Through orders that the MI AG erroneously equates to laws.

So does Sheriff Kim Cole have to reiterate and explain further than point to his statement, and let me repeat it again:

"Each of us took an oath to uphold and defend the Constitution as well as the US Constitution and to ensure that your God-given rights are not violated.  We believe we are the last line of defense in protecting your civil liberties"

Or should the reasonable people in our community that understand basic civics just take his prior statement to mean that he and his deputies will not enforce the latest infringements of your God-given rights?   Preserve your basic civil liberties and make sure others, your local officials, and businesses understand that preservation.  As always, without argument, if you feel that a mask is worth using, by all means, use it, but don't tell others what to do.

At this point he would be " cancelled" and the crazy leftist Marxists would try to destroy his life and that of his family.

So I am taking a leap of faith and hoping he just stays true to his original statements. I am pretty sure he will.

BTW, Did y'all realize that you can get two mask signs free? LOL! Wonder what kind of "grant" the governor shelled out for the cooperative sign makers...

How about this ... Can I have two free signs that say... " We still have a Constitution Dumbasses" instead? Just wondering...

I find this conversation funny.  The US government long ago abandoned the constitution.  Where is the outrage for the Patriot act, endless foreign wars, war on drugs, more than 90% of the prison population never saw a jury, corrupt two-party system and on and on.  But the battle cry by the patriots "I will never wear a mask"  Looks like government has won the war on the people.

David, you sound more of a Ron/Rand Paul libertarian than your self-titled 'progressive' appellation.  Both parties have such dichotomized behaviors that makes much of the political process vote for things that takes away your liberties from the left and from the right.  That's why our liberties are being so eroded, and the current mask mandate is part of that erosion.

The American people have a pact with their government, but the people have been getting apathetic, the government has been getting greedy on coins and power.  This virus has been an opportunity for the corrupt parts of our government (mostly at the state level).  I always say 'no' to the Patriot Act, I always question foreign involvement and find it problematical, etc.  You apparently do too, but you should also be upset with the government telling you to do something that may be harmful to you, without any credible science to back it up, like has happened since early March in Michigan and beyond.

This crisis could be an opportunity for the public to take back their rights, and it will be difficult if people can't put petty philosophical and political differences aside and embrace Constitutional ideals rather than the racist ideals espoused by BLM, and the rest of the communist playbook activities going on in the background.

The list of reasons to be outraged would take up pages if we were to buy into your argument.  You listed just of few of your gripes. Some I agree with , some I do not. Humor indeed is the only remedy right now. Commenting on masks by no means translates to "Patriots" do not care about larger issues. I suppose the reason we talk about it, much to your chagrin, is because we all know full well that the big stuff is beyond of our reach of control.

The fact that our society has gotten to a place of such government control that we cannot even decide if we want to wear a mask or not is disheartening and ridiculous really.

The control of the sheep is complete as you mentioned.  That is the issue that you touched on , but I am not sure you really understand how " Patriots "  clearly understand the danger of such directives. We are not as stupid as they would like to believe. The virtue signalers are only thinking about "our safety" which I find ironic.

"I can kill babies with abandon."  Did you pray to your sky daddy about that statement?  That's fucking rich, sheeple and all.  Long live the EMPIRE!

David and Lake Lady. You both are correct.
The problem I see here is that stores and other businesses are being threatened if they do not enforce the mask order, so if someone walks into a business without a mask and is told to leave will the sheriff enforce the owners complaint to remove the maskless invader? Either way someone will be subject to Whitler’s vengeance. The four eyed dilemma. Private citizen vs business vs law enforcement vs tyrannical government. The Marxist have boxed us into a corner and we willingly complied. Marxist?  Without google can you define a Marxist?

The expression " Jumped the Shark" comes to mind when I read your comments David.

For the record, I have never killed a baby. The point I was making was that I have been given that right. Does NOT mean that I would ever use that right. Abortion is murder.

I won't get into a ping pong match with you Dave , because I can see I hit a tender spot or two. Why so angry Dave?  Maybe you should try praying to the "Sky Daddy" ( such a disrespectful term, but why am I not surprised? )

It might help with that ... Now I am expecting to be called a racist next because isn't that what Progressives' do when they don't want to have a real debate? They throw out insults to quickly end any debate ? Predictable blather.

I like the term progressive.  I would much rather make progress than regress.  I'm not angry at all.  Is the term "sky daddy" disrespectful to you personally or to the so-called creator of the universe.  Once again I find it funny, haha, that people that attempted to claim some higher moral ground believe in giving any credence to a cult based on the ghost rape of a child and the eventual murder of the spawn of that rape as a symbol of love.  That is some fucked up stuff!  I personally like many of the lessons found in the New Testament because they are progressive.  Not sure how any conservative can believe any of that liberal bullshit.

David. A Marxist is a progressive who can’t discuss issues without swearing. If you can’t stop with the foul mouth insults I’ll ask X to cut your cord to this forum. Stop acting like a schoolboy who just found   his genitalia and discovers what happens when you treat it like a genie’s lamp.

How did a discussion about wearing masks digress into a diatribe about the validity of the Old and New Testaments? Now that IS funny.