This weekend marked two anniversaries of notable tank events that have happened during my lifetime that have illustrated how tyranny can drive a regular person to do momentous, albeit a bit crazy, acts to fight back. 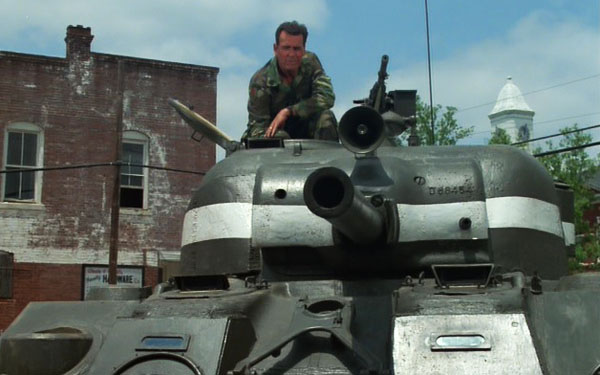 James Garner starred in a 1984 film called "Tank" which preceded both events, but may have helped inspire the event which would happen twenty years later on June 4, 2004.  In the movie, the hero runs afoul of the rural southern county's corrupted sheriff after confronting one of his deputies.  His son, along with his son's lawyer, gets thrown in jail on trumped up charges.  This spurs Garner's  character, a retired veteran,  to  climb into a vintage tank he restored and with that destroy the local jail and police station to free the lawyer, and then to a work farm to free his son.

Over a series of adventures, he and his son become folk heroes and are saved from the villainous sheriff in the end by their immobilized tank being pulled over the state line by a bulldozer.  In 2004, Marvin Heemeyer, out west in another rural area, a town of 2000 people called Granby Colorado, modified his bulldozer over a period of time into something akin to a tank.  Why?

During the 1990s, Heemeyer owned a small welding shop in town, where he made his living repairing mufflers. He’d purchased the land on which his shop was built in 1992. Over the years, he had agreed to sell the land to a concrete company to build a plant. The negotiations hadn’t been easy, and he’d been having trouble agreeing with the company on a suitable price.

In 2001, the city approved the construction of a concrete plant, zoning the land next to Heemeyer’s for use. Heemeyer was furious, as he’d used the land for the past nine years as a shortcut between his home and his shop.  He petitioned the city to have the property rezoned to prevent the construction of the plant, but he was rejected on multiple occasions.

So, in early 2003, Marvin Heemeyer decided he had had enough. A few years earlier, he had purchased a bulldozer with the intention of using it to create an alternative route to his muffler shop, he decided to repurpose it.  He added armored plates, covering most of the cabin, engine, and parts of the tracks, and added a video camera protected by bullet-proof glass that would allow him to see when he was sealed behind those plates.

On June 4, 2004, he sealed himself inside his cockpit and set out for Granby.  He drove the machine out of his shop through the wall, then plowed through the concrete plant, the town hall, a newspaper office, a former judge’s widow’s home, and finished in a hardware store, where he got stuck. Authorities later realized that every building that had been bulldozed had some connection to Heemeyer and his lengthy battle against the zoning committee.

Despite the nearly $7 million in property damage done to the town of Granby, not a single human besides Heemeyer was killed during the rampage.  Rather than be extricated and arrested from the immobilized wrecking machine, he ended the rampage on his own terms and shot himself.  He wrote, perhaps as an epitaph:  “I was always willing to be reasonable until I had to be unreasonable. Sometimes reasonable men must do unreasonable things.”

One has to decide for themselves whether Heemeyer rates as a terrorist or as a patriotic American standing up against tyranny, but he has became something of a folk hero in the tragedy he played a part in, an icon against unreasonable local government policy.

Tank weekend's second event was more iconic, however.  On June 5th, 1989, following a day when the Chinese government used deadly force to clear Tiananmen Square of thousands of protesting students, a small convoy of tanks of communist China's army were approaching that square once again on Chang'an Avenue, coincidentally in front of a hotel where visiting Western journalists were staying.  That's when what appears to be an average Chinese man carrying what appears to be plastic bags in his hand went out in the middle of the street and stood in the way. 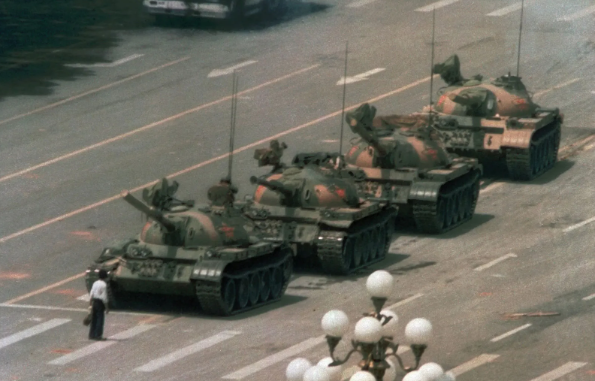 Had the Chinese tank commander and crew exercised no restraint and drove over the man, this would likely have not been an image that would inspire citizens throughout the rest of China and beyond (the Berlin Wall came down later in the year) to stand up against their tyrannical governments.  But they did.

The tank tried to go around him, but the man just moved over to prevent it.  He would eventually climb onto the tank.  After about a minute a crewman emerged from a hatch on the turret, and there was a brief verbal exchange that continued as "Tank Man" jumped back onto the street to one side of the vehicle.  A short time later the lead tank’s driver restarted the engine, and the tank resumed its advance. "Tank Man" immediately repositioned himself in front of the tank, which again crawled to a stop. Two crewmen then appeared from hatches in the turret and gestured for the man to move out of the way.  A couple of men would finally come to escort the man away, it is still unclear whether they were friend or foe.

Whatever his name or his fate, he became an enduring symbol of defiance in the face of violent authoritarianism.  Ironically, he is likely more well known outside of China because of their government's repression of this incident and images therefrom.  Yet most ironic of all is that the tank commander that day, like Marvin Heemeyer, guiding a powerful, heavily armored vehicle through their cities, showed enough restraint to not take a life in playing their parts of two tragedies caused by authoritarian rule.

That guy in the bulldozer was very creative. The guy in the video below was not creative but he was just as destructive. This happened in San Diego in 1995.

I vaguely remember that happening, but never really saw the footage from it.  The entry of that stolen tank commander indicates the aggrieved veteran had a lot of issues going on in his life that drove him a bit crazy-- the government wasn't part of that, but he did his spree shortly after the Oklahoma City bombing.