The Declaration of Independence Revisited

With the advent of the acceptance in the Supreme Court of Obamacare as a tax, which was passed through the legislation as a salvation for American health care, we really need to revisit what the Declaration of Independence said, beyond the preamble which most of us know by heart.  King George was the tyrant of that day who was so terrible to the American colonists that they decided to go their own way, but what was it about King George's rules that so upset the people of that time? 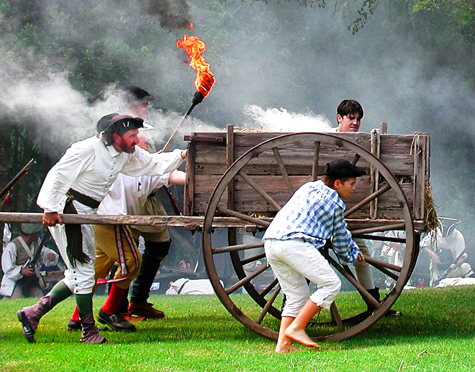 Mason County Press put up the Declaration of Independence in its entirety for its reader's enjoyment yesterday, and that's always good; yet let's look at the context of this document and what was happening at the time, something we don't always take into account.

Americans started a Revolution in 1776 on a British Stamp Act tax so puny that no one in America today would even notice the tax.  What about some of the actual grievances against the tyranny of King George:

"He has erected a multitude of New Offices and sent hither swarms of Officers to harass our people and eat out their substance.”

“He has combined with others to subject us to a jurisdiction foreign to our constitution and unacknowledged by our laws; giving his Assent to their acts of pretended Legislation”

“..when a long train of abuses and usurpations…evinces a design to reduce them…under absolute Despotism, it is their right, it is their duty, to throw off such Government.”

“He has made judges dependent on his Will alone”

“For imposing Taxes on us without our Consent”

“He has…..destroyed the lives of our people.”

“A Prince whose character is thus marked by every act which may define a Tyrant, is unfit to be the ruler of a free people”.

This was one King from an island an ocean away; nowadays, we have not only a Federal government that makes the above look tame, we have State and Local governments doing the same in our backyards.

As the government confiscates under threat of force more earned income from those who produce to fund its massive redistributionist schemes, nonstop wars, pork and corporate welfare state, Americans keep sinking further into poverty and misery, the breeding ground of revolution.  All of these power grabs come at the expense of the liberty and prosperity of all Americans, except those who are favored by the corrupt or are the corrupt themselves.

Once a proud, strong and wealthy creditor nation built on strong moral foundations, America is now a pathetic debtor nation, becoming something the founding fathers would view as repugnant, bereft of virtues and liberties they held dear.  We are at a critical juncture in our history, and those who seek to alter that course have to go up against two political parties and a political system who have a bipartisan agenda against individual liberty and rights.

It is interesting that the tea imported by the British was actually cheaper -- even with the tax -- than the tea that was smuggled in by John Hancock.

It was summed up nicely by Captain Levi Preston of Massachusetts, who was interviewed at the age of 91:

"Captain Preston, what made you go to the Concord Fight?""What did I go for?" "...Were you oppressed by the Stamp Act?" "I never saw any stamps, and I always understood that none were ever sold." "Well, what about the tea tax? "Tea tax, I never drank a drop of the stuff, the boys threw it all overboard." "But I suppose you have been reading Harrington, Sidney, and Locke about the eternal principle of liberty?" "I never heard of these men. The only books we had were the Bible, the Catechism, Watts' psalms and hymns and the almanacs." "Well, then, what was the matter?" "Young man, what we meant in going for those Redcoats was this: we always had governed ourselves and we always meant to. They didn't mean we should."

Yesterday we had our annual gathering of friends and family over for our Independence Day cookout.  As always, before we picked up our forks we read the entire Declaration, with everybody reading a portion aloud, even the kids.

That's a great tradition, Max, and very appropriate for the occasion.  The letter you also brought to our attention should not be too surprising.  The modern day Tea Party may be known for the "Taxed Enough Already" acronym and position, but the movement itself is much deeper than any burdensome taxes being imposed, it is more about the eroding liberty we have, one of whose symptoms is increased taxes.

:Once a proud, strong and wealthy creditor nation built on strong moral foundations, America is now a pathetic debtor nation, becoming something the founding fathers would view as repugnant, bereft of virtues and liberties they held dear.  We are at a critical juncture in our history, and those who seek to alter that course have to go up against two political parties and a political system who have a bipartisan agenda against individual liberty and rights."

The attitude now exhibited by a large portion of U.S. citizens has been slow and progressive but it is now showing it's ugly head in all branches of our Government, the latest and most shocking being the Supreme Court decision. That attitude being "entitlement". The idea that people are entitled to anything other than what is stipulated in the Constitution. It's amazing how often I hear people claim they have a right to all the benefits our nanny Government is handing out. They have never been taught anything else and we are now seeing illegal aliens claiming the same rights. It has truly gotten out of hand. They don't understand that the rights the Constitution protects are the rights to natural freedoms we all have as humans and the right not to be burdened or ruled by any Government. People have so twisted the basic ideals of our Country's reason for existence that I don't know if we can ever return to the true ideals. Of course this all stems from progressive / liberal teachings provided by the Government run schools and from liberal / progressive press that refuses to tell the truth.