This incident happened in a quiet little trailer park in Washington Township a shrot drive away from where I live at.  Check out the video

Those who live on Pineridge say the neighborhood is pretty quiet, but what should have been a routine traffic stop has caught the residents by surprise.

Aaron Tatkowski says he spent Sunday with his family, and when he returned home, he noticed his daughter-in-law had been pulled over by a Washington Township Police officer.

The police report states Cassandra Meyers was cited for a license plate violation. Tatkowski says he didn't like the way the officer was talking to Meyers, so he questioned the officer about his behavior.

Tatkowski says the officer threw him, his girlfriend, his daughter-in-law, and 14-year-old son to the ground.

The police report says commands were not listened to, so Officer Hart got out his taser and handgun. Tatkowski says he complied with Hart, but worried for his two granddaughters, who were still in his truck, so he asked witnesses to start recording what was happening.

"It was totally uncalled for, the way [the officer] was using force on people," said Jim Stechschulte, a witness. "I'm sorry to say that, but that's the way it is and if they don't like it, so be it."

Tatkowski was treated on the scene and taken to the hospital with a cut to his elbow and knee. According to the police report, Officer Hart received scratches in the struggle and was treated at the scene.

The Washington Township Police chief said he stands by the police report, but made no further comment.

I have got a lot of respect for good police officers, some of my good friends have or have had that job, and I know about the recent shooting that happened up in Mason County of the state trooper, very sad.  I worry though when I see videos like this and others that go up over the internet, and my mind plays these --what if?-- games.

I am following this story above, it might turn out otherwise than what it looks because the camera didn't strat rolling until the family was down on the ground and detained.  It hints at something worse.  Why did the police officer act like that?  I read with interest what happened with Joe McAdams and thank the Torch for bringing that out from the pits of ignorance.  Three officers of different departments acting like gang hoodlums.  And that other Ludington officer that had multiple police brutalities on his resume (Saylor?).

But now its over a week since the trooper shooting, the suspects were caught and arraigned and the trooper buried with honors.  But I see nowhere in even the GR and Travere City outlets anything about what may have happened that night when the young lad allegedly shot this trooper.  Nobody is wanting to know the truth, I think this sites creator and others who show up mostly do, but it seems most of the commenters on news of this want to execute this young man, many before a trial.

Have we grown so easily manipulated by the systems that we would sacrifice his rights as easily as it seems he did to the trooper?  Are there not scenarios that could have played out that made the shooting more justifiable?  The circumstances and the cast of characters sure don't point that way, but unfortunately we have only the two witnesses in jail to base what happened that night.  And one helluva question:  What went on that made that man pull the trigger that night when he shot that cop?

You might want to ask the same of Lowell Fetters.

I'm a firm believer in justice. If a person has broken the law they should be held accountable but to often the police over react and where there was no problem the results of police over reaction creates a problem. I know there are those that think police are heroes but I am not one of them. There are of course police who are heroes based on their personal actions and mindset but the profession itself should not be considered a bastion of heroes. I think we set a dangerous precedent when we classify police in general as heroes. No other profession that I can think of has the power over people as does the police and for people to consider all of them as heroes just sets up a scenario where the police and much of the public want to overlook police aggressiveness because they are "heroes". It gives the police reason to think that no matter what they do we should honor and respect them. History is riddled with stories of police corruption and in my opinion police corruption is worse than crimes committed by common criminals.

Thanks for your thread, Tom, and for contacting me earlier this summer when you were in town, when we actually chatted about Fetters for a few.  I have already complained a little about the "incomplete" stories we get from our public entities that operate as law enforcers.  And while it is unfair to MSP Paul Butterfield that he can never testify as to what happened, it is also unfair to the people to withhold the majority of the known facts and investigative records from the public, and unfair to the defendants to let all revealed records from the police to work only for promoting the prosecution side to the public through the media.

Heroism is not determined by your profession; if the story is correct regarding the Toledo incident, the policeman is far from a heroic figure.  A badge does not make you a hero or even give you special powers not defined strictly through law, but it does mean that you will be held to a higher standard.  And if you reach that high standard, you'll be taken for a hero.  The longer police/prosecutors remain silent over an incident, means that there is a lot that they either don't know, or that they don't wish to reveal.

I found this bit on my newsfeed today.  It tells of a man who gets in a late night car accident, crawls out the back window of his car, goes to the nearest house and urgently knocks on the door.  The woman that answers doesn't recognize him, calls the police, and shortly they arrive.  He does not try to force entry apparently does not know the police have been called ON him, and when the police arrive and he advances towards them one officer attempts to taser him, and another fires multiple shots into him.  The police originally claimed there was no problems, but within hours, to their credit, they changed their mind.  The shooter who is white is now charged with voluntary manslaughter.  The victim is black, worked a couple of jobs, about to be married, a former football star, and quite dead.     http://www.dailymail.co.uk/news/article-2421635/Jonathan-Ferrell-Un...

This shooting appears to be as senseless as what happened at the Krysz-Butterfield traffic stop.  But they are treated quite differently by the investigating authorities. 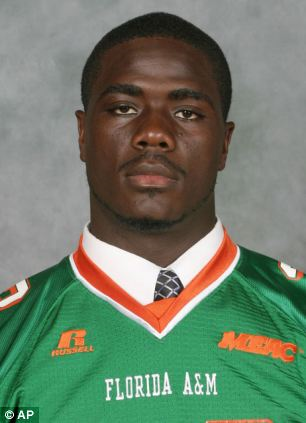 Nice to see you back Tom T., welcome, and keep up the great threads. Aqua

Thanks Aqua M.  I can't keep up with too much creative output, the boss may look in and wonder why I don't use any on the job, Har, Har, Har.

The above video happened two years ago in Florida, a young woman, Danielle Maudsley, who was being detained at a police station for allegedly leaving the scene of two accidents, decided to 'leave the scene' at the police station after nearly an hour of processing.  She has died this week from complications from this incident, after being in a vegetative state since.

As you can see, she is wearing handcuffs, and is followed closely by Trooper Cole, who has time enough to draw his taser and shoot her, where one would suspect a reasonable person would just reach out and grab her.  Trooper Cole has since said that he never warned the woman that he was about to tase her, and that he would do the exact same thing if it happened again.

Of course, he was cleared of any wrongdoing by his peers, and continues to serve the citizens of Florida with a taser and gun at the ready.  The trend in policing to a near total lack of remorse and accountability in situations like this is more troubling to me than just about anything.

I can see that her head hit the pavement with a lot of force. It's sad but she only has herself to blame. What did she think the police were going to do, just let her run? That cop was on the heavy side and I doubt he could have ran for any kind of distance. It's to bad that she made the foolish decision to run, she caused herself, her family and the police a lot of unnecessary grief.

The poor girl looks little more than a kid who has done what, drive her car badly and not stopped?  Let's say the police didn't err by not more fully securing her when she was detained and gave her no good reason to run out like that, then she would get some fleeing and eluding offense tagged on and have part of the blame.  I think the video shows the cop could have done a quick sprint and apprehended her a lot easier or could have stayed within tasering range and shout a warning to stop or else.

Most criminals have made a mistake in judgment anyway in committing their crime, maybe lets have the police use a little common sense in using their equipment.  Very sad how the police don't claim any responsibility though/

FHP Trooper Daniel Cole's actions bespeak of a needless fatality. 50,000 volts of electricity into a 19 year old female, only 92 lbs. in size, already handcuffed behind the back, within easy arm's reach, vicious excessive force! Trooper Cole, how do you sleep at night? You need to resign immediately.