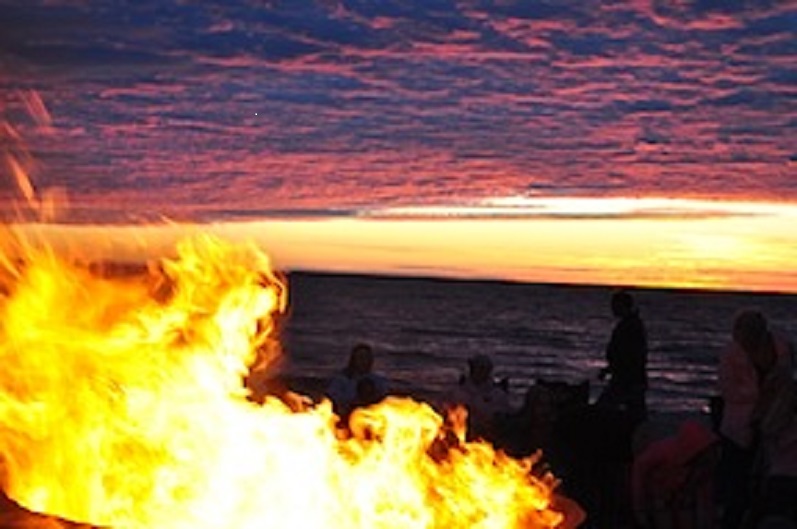 According to the City of Ludington Daily News (COLDNews) "The Harbor Festival Stearns Park Beach bonfire Wednesday night, July 2, 2014, saw a crowd grow as the sunset neared and they were rewarded, on a cool, fall-like night, with a fall-like sunset."
Whereas the Ludington Torch appreciates the intent of these beach bonfires to advertise our humble forum, it must be stated that the City of Ludington, who sanctioned this event, did so without regard of their own rules. Section 38-72 of the City Code says explicitly: "No person shall kindle or build fires in any park or beach, except in fireplaces or grills provided for that purpose." There are no exceptions noted. Why can our local government ignore with impunity the rules they pass onto the rest of us?

True, and the "Garden Party" held after this last Friday Night Live where alcoholic drinks brought with your tax dollars were served at the North James Street Plaza is likely in violation of Michigan LARA permit rules.

Two meetings ago, the council passed a resolution for applying to the state for an application for the liquor license for the event.  The problem was, they admittedly had opposition from a church nearby to the event, and an incomplete form.  Technically, they were within the range of two other churches as well due to where they set up.  Chances are the City did not get the church's approval, but even if they did, the council hasn't voted for it once the preliminary steps were completed.

The City's outdoor biergartens thus have a series of unfair advantages over our private downtown drinking establishments.  It's setup/security is done with public dollars, it's venue is courtesy of the public plaza (generally unavailable to private business exploitation), its liquor license, equipment and supplies (including the alcohol itself) are brought with public dollars.  Their bands/entertainment is brought with public dollars.   The two mills you provide the DDA with and the TIF scheme that unduly burdens those citizens outside the DDA, provides them well over $100,000 that they can spend to the detriment of those the money is supposed to help, our downtown businesses.

Finding a situation where the Council follows the laws is becoming a rarity rather than the norm.

That "homecoming fire of the dummy" was against the LHS game adversary, and it wasn't at Oriole Field, it was where the COL Municipal Marina is now. Dummy made of straw/hay. Aka the old school bus terminal. The old semi-pro baseball field, aka fisherman's alley, where commercial non-tribal fisherman got chubs and whitefish for sale, smoked or fresh, circa 1950's-1970 or so. I'll make a future ref. to that specific ord. by COL if you don't beat me to it X...lol.

From my research, there is no specific ordinance or charter provision that explicitly prohibits such fires, however, the city officials involved apparently feel they have the discretionary power to do so if they feel the public safety is compromised.

The record does show that back in the period of 1985 to 2005, the LASD would regularly come to the council in September to get permission to have a homecoming bonfire at Oriole Field, and get help from the LPD and LFD to monitor the situation.  This Stearn's Beach bonfire was held without any such vote by the council to approve it; the student bonfires at Oriole Field were lawfully made outside of a park or beach, the vote was more to get the services of the two public agencies.

It is clearly against Ludington law to have fires kindled in parks or beaches (outside of areas specifically designated for that purpose) of which the Stearn's Park area is both.

There is also a specific ordinance that strictly prohibits any open fire withing the city limits. It specifies rubbish, and rubbish is garbage. Rubbish is not wood, nor sawdust. Yet, in the past, I and many other parties, have been stopped with threats from LPD for burning such non-rubbish type items. Gerry Funk specifically denied us on several occasions, with the aid of LPD, telling us they would put the fire out with a fire truck, and fine us handsomely, to the tune of $10K if not extinguished. Same-o stuff, the rules are for citizens, not the COL.