Inside Edition premiered on January 9, 1989, making it the longest-running syndicated-newsmagazine program that is not strictly focused on entertainment news. The 30 minute program features a mix of hard news stories, entertainment news and gossip, scandals, true-crime stories and lifestyle features.

They recently caught up with Ludington's own Miss Sawyer Hendrickson and featured her with the following story over the weekend.   National media rarely focus on stories from 'flyover country' unless they are sensationalistic or otherwise newsworthy.  The 30 years of archives indicate this is the first time Ludington was ever mentioned.  Thanks, Inside Edition, for recognizing this young Ludington veteran of several campaigns to support our troops and veterans. 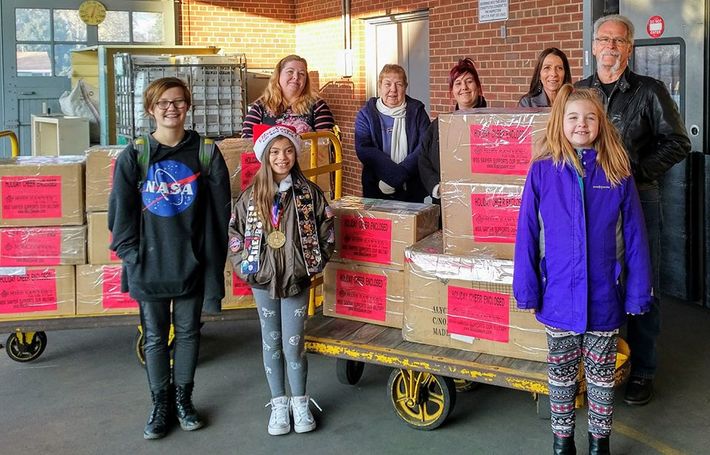 She may be small but she sure is mighty.

At just 10 years old, Sawyer Hendrickson, sometimes known as Miss Sawyer, is dedicating her life to supporting military and veterans.

“Kids my age and people these days don’t really think about veterans and military people out there putting their lives on the line to protect our freedom and do what we do every day,” Sawyer, from Ludington, Michigan, told InsideEdition.com.

Her main project is her annual Sawyer’s Stockings — care packages wrapped in Christmas stockings sent abroad to military men who will be away for the holidays.

Ever since she started putting them together at just 6 years old, Sawyer said she has sent more than 25,000 stockings to military bases all over the world, and hopes to send 10,000 this year.

To get all the stockings organized, she has a few girls helping her: the “kids with a cause” as referenced by the name of her nonprofit Miss Sawyer’s Kids with a Cause.

Her acts of kindness to military members began when her older brother, 21-year-old Kylar, joined the Marine Corps. four years ago.

“He’s such a big member of the family and we were all going to miss him so we thought we’d do something while he’s gone to remember him,” she said.

But Miss Sawyer’s Kids With a Cause continued to take on more and more projects, including what they call their hero rocks, which are hand painted rocks with the word “hero.”

“We hand these out to our active military members and veterans and it’s just to thank them for their service and sacrifice to our great nation that they helped us build,” Sawyer said. “We give this to them to let them know they’re appreciated.”

The group also lays wreaths on the Tomb of the Unknown Soldier, visits military bases and do different fundraisers throughout the year to support the Sawyer’s Stockings project. A true sweetheart. Her family must be bursting with pride.