If you've just got your summer tax bill for your Ludington property or properties, you will find a brand new fee attached to it called the "Administrative fee", you may also notice that this fee equals 1% of your full tax bill, meaning that if your total taxes were $2345 that your administrative fee would be $23.45.  If you've been paying taxes to the City of Ludington for any amount of time, this should be the first time you have seen the administrative fee attached to your bill, and you may wonder where it came from and why I say it is unlawful.  A trip back in time to the early eighties is in order. 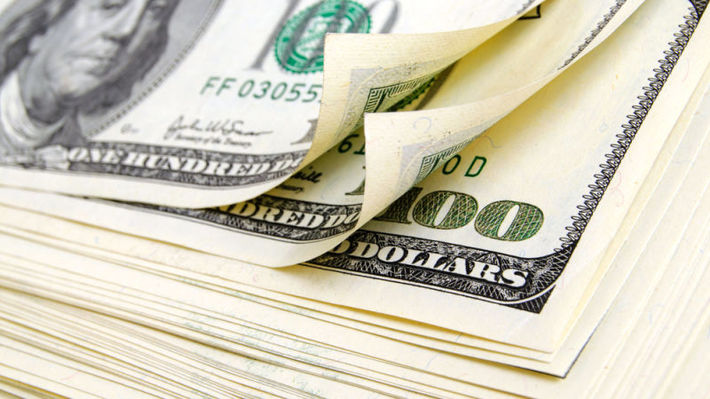 Thirty-six years ago, Act 503 of 1982 became the law of Michigan on New Year's Day of 1983.  The act changed certain sections of the state's property tax act originally created in 1893, allowing certain fee and charges to be imposed.  Among these were a Property Tax Administration Fee (PTAF) to offset fees of property tax collecting authorities for doing their job.  This action of allowing a PTAF did not go unnoticed by city officials until this year, actually they noticed it quick enough to get it as an agenda item at their July 5th, 1983 meeting, where the minutes reflect 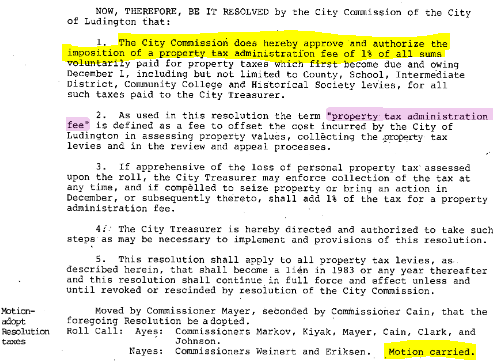 Now before you say game over, the City should have been collecting these PTAFs for 36 years and we sure are lucky they just started doing it, we only need to look at the next meeting to see why that would be a mistake.  Apparently, either their constituents made it fairly clear to some of them that they didn't want extra charges on their tax bill or some just didn't understand the resolution the first time through, for instead of this resolution passing 6-2, the same resolution reconsidered by the councilors at the July 18th, 1983 meeting failed on a 3-6 vote, with all nine commissioners present.  This came after a motion to reconsider the resolution passed 6-3, with the same councilors voting for reconsideration voting against the PTAF.

The concept of PTAFs would never come before the council again until last year, when Interim city manager Steve Brock wondered why Ludington wasn't collecting them.  Before going forward 35 years in time it should be noted that the City in 1983 went through the process of bringing the addition of the PTAF in front of the citizens at a council meeting and took a vote on a resolution to adopt PTAFs.  This was required by statute then, and it's required by statute even now, as MCL 211.44(7) says:

Ergo, for a PTAF to be imposed on a tax bill in Ludington, the city council must approve the PTAF by resolution or ordinance.  Politically, this is tough to vote for as a city councilor, as you will be seen by many voters as using any means possible to get more money from them.  It should be noted, that two of the three who voted for the PTAF the second time, did not survive the next election cycle.

Steve Brock had been interim city manager for a few months when he brought up the topic 35 years later at a November 19, 2018 Committee of the Whole (COW) meeting, seemingly giving thanks a week early to the bountiful purses and wallets of city taxpayers.  Brock notes several key things working in the City's favor:  investment income has increased, revenues are up, the City can afford to pay for what would amount to double digit wage increases for personnel.  Yet despite all that extra wealth, he urges the council to approve and apply PTAFs-- because more money is better (a notion most taxpayers can appreciate from their own perspective):

And since COW meetings expressly prohibit the council voting on any public policy issue, this was just noted then and noted in the December 10, 2012 council meeting when Brock would introduce the budget by saying among other things, that the budget reflected his suggestion that the council institute a PTAF of 1% even with trends looking very positive towards getting much more state revenue sharing in cities.

The city council would pass the 2019 budget that night, but not any ordinance or resolution that took Brock's suggestion to heart to establish a PTAF.  Nor did they at the December 17th meeting, which would have probably been the best time for it to pass, as two lame ducks were still on the council and would have zero political fallout for voting on it.  Likewise, two others had just been re-elected and would have a four year buffer for citizens to forget their decision.  This brings us to...

The city council started the year with ICM Brock at the head of the city, he was succeeded by Assistant City Manager Jackie Steckel who took over as ICM at the end of January until March, when new City Manager Mitch Foster assumed control.  Despite this turnover, Steckel's presence throughout in a city manager role should have provided a continuum of administrative policies.  Including what should be brought before the council.

But despite the PTAF being assumed into the 2019 budget, it has yet to be considered by the city council as a resolution or ordinance, as the law requires.  Any review of the agendas and minutes since Brock's suggestion to adopt a PTAF to support his budget clearly shows it has not happened.  I haven't missed a council meeting yet, and this topic hasn't even came up this year in passing or in theory.

So if the law requires the city council to authorize any PTAFs considered, and they have stayed clear of this third rail topic, the property tax administrative fee is bogus, it's not lawful, it's a fake fee.  Ignore it, or expect a refund if the City doesn't retract it from your city tax bill.

Then go to the next council meeting and give them some Hell for not doing their job, continuing to do their cowardly secret squirrel stuff all while attempting to extort extra money from your pocketbook.

Permalink Reply by Freedom Seeker on September 2, 2019 at 9:02pm
You should be on the council, X. It would save Ludington a lot of time and mishaps, if they would only listen and not criticise and condemn and ridicule and shame you. But at least it seems like Mitch Foster is starting to listen and consider your point of view, unlike previous administration who would instead put a personal protection order against you and a Letter if Trespass which was ruled wrong by the courts.

It took John Shay a couple of years to feel intimate enough with me to create a new policy to ban me from city hall.  It took him a couple of more years and a couple more losses in lawsuits for him to feel free to slander my reputation with baseless allegations.

Here's hoping Mitch can look at things more objectively than John, and can continue to perceive the part I play as an asset to the City, rather than a liability.

It's kind of all in the communication. Kind of like a good doctor with good bedside manners versus one who is short on patience and rude. The good doctor will let you ask questions. The patient's understanding and well being comes first. And the rude doctor gets pissed if you question his authority. In generality, the good doctor is confident in himself and his skills and is a better doctor in manners and skills. I think with the previous administration there was a lack of skill and then too much ego to be confident and able to handle any criticism. It takes a wise person to see a benefit in criticism.

Permalink Reply by Du Wright on September 2, 2019 at 9:09pm
So now what? Will the city council correct this oversight and vote on it? Meanwhile are you saying the administrative fee is not legitimate without a council vote and cannot apply to this current tax bill? For those who paid it already will the city have to go to the expense and confusion of refunds?! And if we haven't paid it and protest it, will the city accept the tax payment minus the administrative fee? Or will the city look the other way and sweep this under the carpet?