Thankful for an Early Christmas Present on Halloween

Thumbing through today's mail I found an abnormally-sized letter from Consumer's Energy promising me some good news on the outside of the envelope.  Mindful that I hadn't paid last month's energy bill (which was already past due from the prior bill-- mainly due to frustration with passwords when trying to pay via the internet, and then forgetting about it later) the last thing I expected was good news from the light company.  I only had missed a payment once before this string, so I was more expecting a shut-off notice.

I opened  the letter and saw a picture of a lighthouse on the front end of a greeting card.  My trepidations and reservations turned out to be unwarranted, once I read the bottom of the card and read the last seven word sentence. 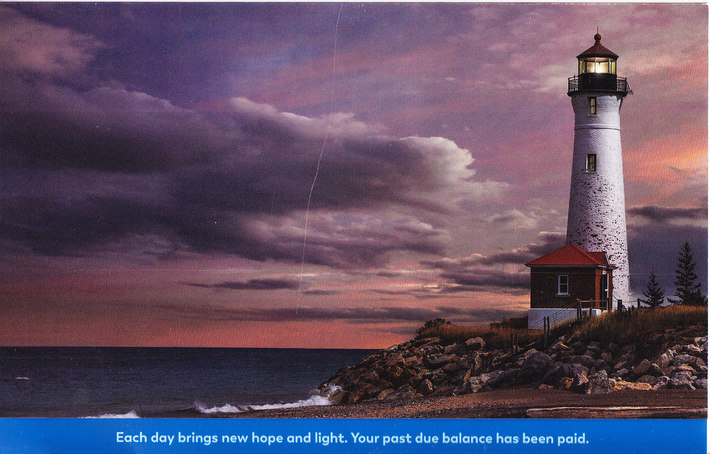 "Your past due balance has been paid."

It's the energy company's more cumbersome way of saying:  "I love you."

Inside the early Christmas card it starts off by saying "Just because", as if to validate that belief.

They go on to explain.  "We're paying off the past due balance of your energy bill.  Why?  Because it's the right thing to do.  You're getting through the challenges of this past year.  Based on your payment history, you're doing your best.  We want to do our best too-- to help our friends and neighbors get back on their feet."

What a nice gesture, I almost wished I was actually going through dire economic issues instead of just being lazy and forgetful so I could appreciate it even more.  I still appreciate this gesture by Consumers' Energy greatly and will definitely try to pay the money forward to my friends and neighbors.

Thank you, Consumers' Energy!  I expected something like this even less than I expected MSU to beat Michigan today at Ann Arbor.  Go Spartans!

That's a coincidence. I received a notice from Consumers saying they donated my last months payment to a community rabble rouser and if I didn't like it I could shove my smart meter up my keester. Ouch! That smarts. Now I know why they're called smart meters.

And when they revealed the name of the rabble rouser, you had to declare it was wealth redistribution done right.  Thanks for the free energy, Willy, and don't forget to disinfect your smart meter just in case the Consumers' guy comes over to recalibrate your meter to cover my next bill.