All too often we glance at the local law enforcement reports in the COLDNews or the latest court news in the MCP and without a second thought read the bad guys name, what he's done, and how much time he will get.  But I would encourage you to look closer, for sometimes in the mix of what you read is something a bit more sinister that is left out by the reporting police and their media allies.  It's the crime not-spoken of, that may have happened before, and should at least be reported to the public for their fears of an increasingly tyrannical government.

I have no clue as to what kind of person the man described in the following article is.  I know he has been convicted of a felony before, for whatever that implies, but I do not know his motivations in life or his dreams.  He may be just like you, or somebody you know closely, who has found themselves in arrears with society through no fault of their own.  Or he could be a monster, as portrayed.

As related in the Mason County Press: 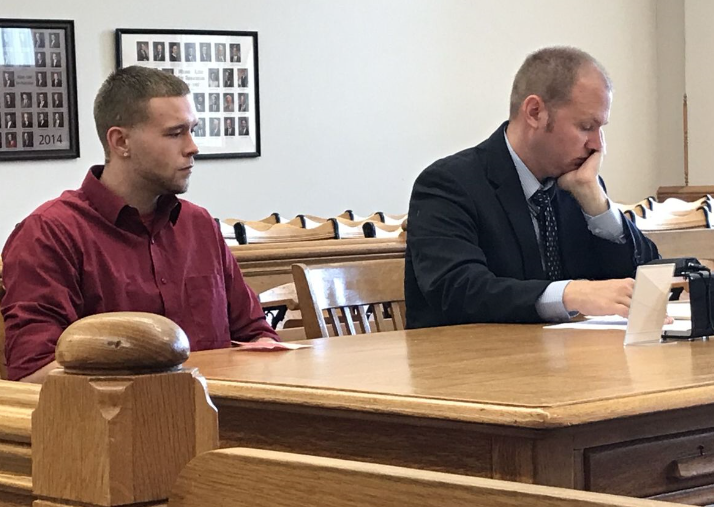 LUDINGTON — A 24-year-old Ludington man who testified that he “took off running” when a Ludington police officer attempted to search him last July pleaded guilty in 51st Circuit Court Tuesday, Sept. 5, to assaulting/resisting/obstructing a police officer.

Curtis Jerome Johnson, of 608 E. Dowland St., said, the arresting officer [Jason Smith as per the COLDNews with an otherwise similar story] “was being very forceful” and “demanding that I tell him I did something that I didn’t do.”

Johnson said he suffered an anxiety attack and ran away. “I just took off running,” he said. The officer was attempting to search his backpack, he said.

In exchange for his plea, his second-offense habitual offender designation was dismissed.

As noted, Curtis Jerome Johnson has a tainted past, this snipping from the MSP Registered Sex Offender search shows that: 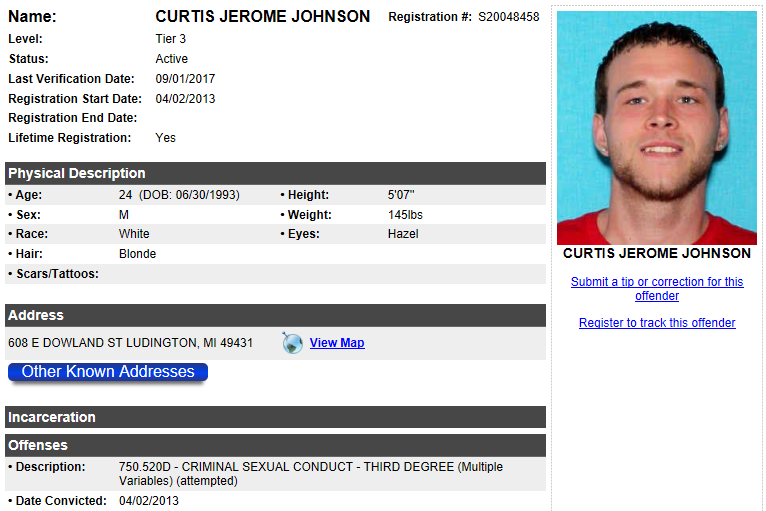 When he was 19 years old or younger he attempted to violate MCL 750.520d, which suggests he either attempted to forcibly rape somebody or have sex with somebody unable to give legal consent because of their age or mental capacity.  The crime doesn't appear to have been on the severe side of the scale due to his being out in society four years later, but let's assume this registered sex offender is a normally bad person, and it may be better for society to have him locked in a cage for as long as possible.  Does that give him less rights than you or me?

As a previously convicted sex felon, he does lose some rights, but still retains the majority of them, especially if he is not on probation, which is never intimated in any of the coverage-- for otherwise, they would surely include he was violating the terms when Officer Smith interacted with him.

In the article Supreme Court: 4th Amendment Protects Sex Offenders from Big Brother, we learn that the Supreme Court interprets that sex offenders who have served their time still retain the crux of their Fourth Amendment rights, the one that protects citizens from unwarranted searches and seizures by government authorities.  An officer cannot just use the fact that you are a convicted felon to search your person, your personal effects, or your house, on a whim without going through the normal warrant process, or articulating a reasonable suspicion that you have committed or are about to commit a crime.

Reading the articles closely, it is never reported by any source that Officer Jason Smith (pictured left) was conducting a search that was legal.  Effectively, they point away from that by the fact that no other crime or civil infraction is part of what Johnson is charged with.  Was there a valid reason Officer Smith had to search the backpack of Curtis Jerome Johnson?  Citizens aware of their rights would notice no reason is given for this search and this is a very important aspect of what occurred; without a compelling reason or a warrant, Officer Smith had no authority to harass Johnson about looking into his backpack.

Without such compelling reason or warrant, Officer Smith had no power to be 'forceful', as alleged, and no power to insist on looking into a personal effect protected by the Fourth Amendment.  In that regard Officer Smith was effectively assaulting Johnson.  By asserting that he had that power and allegedly falsely accusing Johnson of a crime of which he has not been charged, Curtis Johnson faced either the daunting power of Officer Smith taking his backpack by force or the unwarranted surrender of his legal rights against such search and seizure.  Is it any wonder that he took the course of running away in fear of somebody with a gun improperly exercising power and otherwise threatening to use that power unlawfully and against his oath of office?

For that is all that Johnson did, run away from a perceived threat, away from somebody ready and able to violate the law and their duties.  This was without dispute in the articles, and in the court.  Yet Johnson is being charged with a felony for running away when the 'resisting' law (MCL 750.81d(1)) states:  "an individual who assaults, batters, wounds, resists, obstructs, opposes, or endangers a person who the individual knows or has reason to know is performing his or her duties is guilty of a felony."  But he was arrested in July, and charged with a felony of assault, et.al., when he seems to have been the one fearful of being assaulted further and fled.

Fleeing from police is not, by itself, illegal in America, and the U.S. Supreme Court has made clear that in safe neighborhoods, people not suspected of criminal activity can ignore a police officer who approaches them, even to the point of walking away (even cop-friendly PoliceOne.com acknowledges that).  There are gray areas, such as if the neighborhood is a notably high crime area, and if the officer has articulated a reasonable suspicion of criminal activity.  Officer Smith appears to have accused Johnson of an offense, and erroneous or not, that would probably indicate a reasonable suspicion.

But even though this would justify a 'stop and frisk' search, this wouldn't allow Officer Smith the power to search Johnson's backpack as he was asserting to do without a higher standard of probable cause and exigent circumstances, consent, or a warrant.

As there has been no indication that Johnson was being arrested for anything else in any of the documentation before he ran off, he should not have been convicted of obstruction, or any of the other actions in the statute of assault/resisting officials.  The zealous prosecution of Johnson, innocent of anything else other than his Constitutional right to evade an overbearing and unreasonable police authority, should indicate that the officer's crime before his non-crime was far more egregious and socially unacceptable than Curtis Jerome Johnson's flight.

Interesting case X. In my opinion, police should not stop or detain anyone unless their is evidence that a violation of the law is being committed or if the person matches the description of someone who is being sought in connection with a crime that has been committed. Even though Johnson may or may not have been in violation of the law, he would have been smart to cooperate with the officer only because he has a record and it doesn't seem wise to give the police any reason to bust him which seemed to be the motive behind the officers actions.

Like many of these cases, the police and media leave the public without a full understanding of what happened, in explaining the official narrative.  When that story leaves off important points, like why Officer Smith was harassing Johnson to look in his backpack in the first place, the discerning reader should read between the lines and realize that there's likely a good reason why they did.

Officer Smith's reputation does not have him as a de-escalating sort of police presence.  If Smith came to me and wanted to see what was in my backpack without giving any reason, I'd politely tell him to buzz off and get his own Spider-Man backpack even when I don't have any incriminating things within it besides that Celine Dion CD; it's a matter of principle.

On the other hand, Johnson was on probation and it may have been reasonable for him to consent to a search, even though the terms of his probation does not include consenting to warrantless searches.  Without Officer Smith saying he was acting under direction of Johnson's probation officer, Johnson appears to have had the right to end the encounter by running away.  Instead he gets a felony for it.

As a taxpayer who will have to help potentially pay the City's legal bills and settlement for the officer's possible error, I am deeply concerned that things went as they should have, as should all Ludingtonians.