Even formerly powerful Democrat state representatives aren't immune from faulty coverage when they die while on a motorcycle.  Douglas Bennett, 75, of Muskegon Township, previously served in the Michigan House of Representatives.  On Friday night, 7-16-21, he was on his motorcycle driving near Muskegon's beach when he and a truck collided; the details are still sketchy and actually getting more self-contradictory as time passes, at least according to FOX 17. 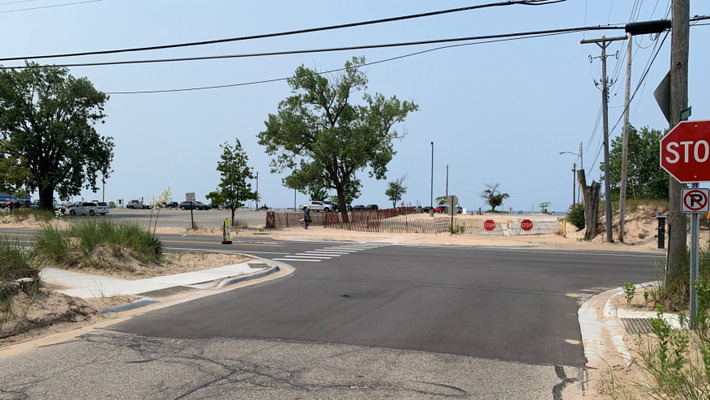 Original reports from the station indicated that Bennett was out riding after 10:30 PM on his motorcycle, when they updated the facts to include that the actual crash happened before 9:00 PM (when it would have still been daylight out), they forgot to remove a statement from the family that said Bennett wouldn't usually be out that late on his bike.  He wasn't that night. 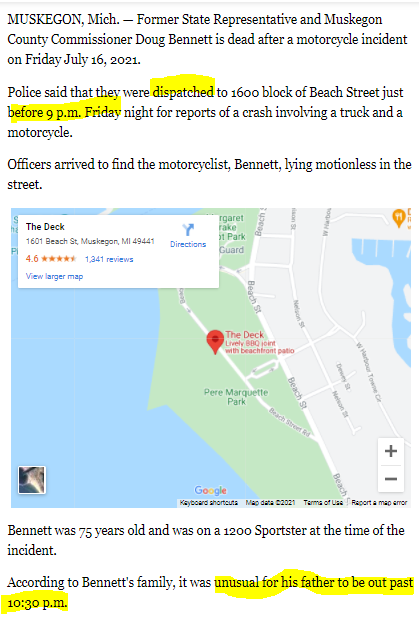 At that time of the evening (8:55 PM) on that popular stretch of beach, there could have been numerous eyewitnesses to the accident.  Some of those have commented on the FOX 17 posts and the other two media covering the event, some claiming to have already been contacted by investigators, they all appear to be pretty certain that the truck driver was at fault for Doug Bennett's death.

Any local motorcyclist and bicyclist can surely relate to what may have happened here, if you have ever rode down Stearn's Outer Drive on a summer day and have vehicles pull right out in front of you and sometimes pulling out right on top of you.

Drivers backing out never have to worry, they can use the old standbys like "I didn't see them." or "They were riding too fast." and be resolved from causing accidents that could prove fatal to others.  Heaven help the biker who isn't wearing a helmet or wearing too light or too dark clothes or otherwise obeying all the rules of the road when they get hit, they won't get any help from investigators or reporters.

Face it:  with the existing mentality of the police and media, riders will always be the one to blame, and it will be almost 100% certain if you die or get sent to the ICU.  They will now reinforce that by interviewing the victim's family, giving them bad information on when their missing loved one was killed, and printing only that it was unusual for the victim to be out riding so late-- when they weren't.  And even a beach full of witnesses won't change that narrative.

Another sad story of a biker accident gone wrong. Very sorriful event that was probably carelessness on the part of the truck driver here. Too many people just aren't looking for bikers, and/or make quick decisions that are not prudent nor safe. Four days after, the police are still mum on the mechanism behind the accident.  Even if they figure it out, the three news agencies that reported on this will not likely add it to their coverage, so allow me to speculate on what may have happened and why the obvious cause (easily determined in minutes) is being suppressed by both police and media.

The street Bennett was on was much like Stearns Outer Drive, but with two lanes (see above).  Vehicles have the convenience of sliding into diagonal parking spaces on both sides of the street at either place.  The convenience comes with a cost, when you slide back out, you often have limited visibility; many times you have to be actually in the roadway before you can see what's coming up behind you.

The 'safe' way to back out of a angle parking space when your view is obstructed is kind of obvious, but rarely stated.  Take it very slow, tap on the brakes, let those coming up that you can't see, see that you're backing out.  In this case, the truck driver is likely to have just slid out of the space right into Bennett's motorcycle.

If there had been no witnesses, the investigation is simple if the scene hasn't been tampered with.  You see where the truck and motorcycle is damaged.  See where the pieces flew, see the damage to the body.  Any competent crash scene investigator should be able to tell you the mechanics of what happened to give you a preliminary finding.  Four days later, they should have supplementary info from the crash data recorder on the truck if there were uncertainties, the only thing that might be outstanding is DWI tests administered to the driver and Bennett's autopsy results.

But it will mean little to Bennett's family and wide swath of friends, because the initial coverage will likely remain static, effectively blaming Bennett for riding after 10:30 PM when that's not even the case.  The fault could easily be argued to be due to the hazardous-to-bikes engineering of the street, which neither the police or media want to encourage.